Maps, Indicators and Factsheets for the Mediterranean sea region

After a complex phase of data collection, validation (including stakeholder consultation) and integration, the Med-IAMER project identified a wide number of indicators used to display spatial information about socioeconomic drivers and environmental pressures in the Mediterranean region. A specific “cumulative pressures” indicator was also formulated, accounting for the interactions among the six major drivers. The spatial distribution of the selected indicators was displayed through maps developed at the scale of the whole Mediterranean Sea region, as well at the scale of the Western Mediterranean and of the Adriatic-Ionian ecoregion. Factsheets (synthetic documents for each ecoregion and driver) were also prepared, briefly explaining the used methodology to derive the indicators and the main findings in terms of spatial distribution and critical issues.

Maps, indicators and factsheets were produced within the Med-IAMER project ran in the period June 2014 – May 2015. The project aimed at providing recommendations on transnational integrated actions needed to mitigate environmental risks in the Mediterranean Sea. Med-IAMER produced methodological tools and knowledge deliverables to structure abundant but not readily accessible spatial information, highlighted data gaps, and identified the most vulnerable hotspots and their associated environmental pressures, while linking them to regional cooperation instruments.

Med-IAMER maps, indicators and factsheets are part of the knowledge base produced by the project to support the formulation of recommendations in terms of transnational integrated actions needed to mitigate environmental risks in the Mediterranean.

The DPSIR methodological framework was used as conceptual approach to structure the analysis of socio-economic uses (referred to as ‘drivers’) and the related ‘pressures’ exerted on the condition (or ‘state’) of coastal and marine ecosystems.

The first part of the work focused on a broad phase of data collection. Data were obtained from a wide range of sources, including; data and statistics portals, past and ongoing projects, research papers, etc. The content, limitations and relevance of the data were evaluated during the validation process also including stakeholders and expert consultation. Data integration from different sources allowed constructing a comprehensive database of coastal and marine pressures. In the last step, a gap analysis was performed, in order to verify spatial coverage and data completeness within the study area (the whole Mediterranean Sea, with special focus on the Western Mediterranean and the Adriatic-Ionian region). Whenever possible, alternative data or proxies were used to fill the detected gaps. In order to identify the most important drivers and pressures in the studies' ecoregions, a set of criteria was established focusing particularly on the environmental and socio-economic aspects of the Adriatic-Ionian and Western Mediterranean coastal and maritime environment.

Three base maps were used to display spatial data: one for the whole Mediterranean Sea region and another two more specific maps for the Western Mediterranean and Adriatic-Ionian ecoregions. A matrix relating drivers and pressures in both ecoregions was prepared, highlighting the most important pressures for each driver. At least one relevant indicator (quantitative or qualitative) for each driver and its highlighted pressure was selected on the basis of sound scientific knowledge and expert knowledge. Relevant input data for each indicator were identified, reprocessed (if needed) and combined.

All spatial indicators were used to produce maps for the whole Mediterranean basin, with a special focus on the Western Mediterranean area and on the Adriatic-Ionian Area. The mapped indicators of drivers and pressures for the Mediterranean basin include the following themes: climate change, fisheries, aquaculture, marine litter, oil and gas, coastal and maritime tourism, maritime transport and coastal urbanization. Other maps display the distribution of: marine protected areas, existing legal frameworks, fishing trends, blue energy resources and supply. A further map finally displays the cumulative pressure indicator, combining the effect of the six major socioeconomic and environmental drivers of pressures.

Factsheets were also developed to produce a synthetic document for each ecoregion and driver, as support for discussion during the process of stakeholder consultation. The factsheets briefly illustrate the methodology that was used to derive the indicator and describe the main findings about its spatial distribution. 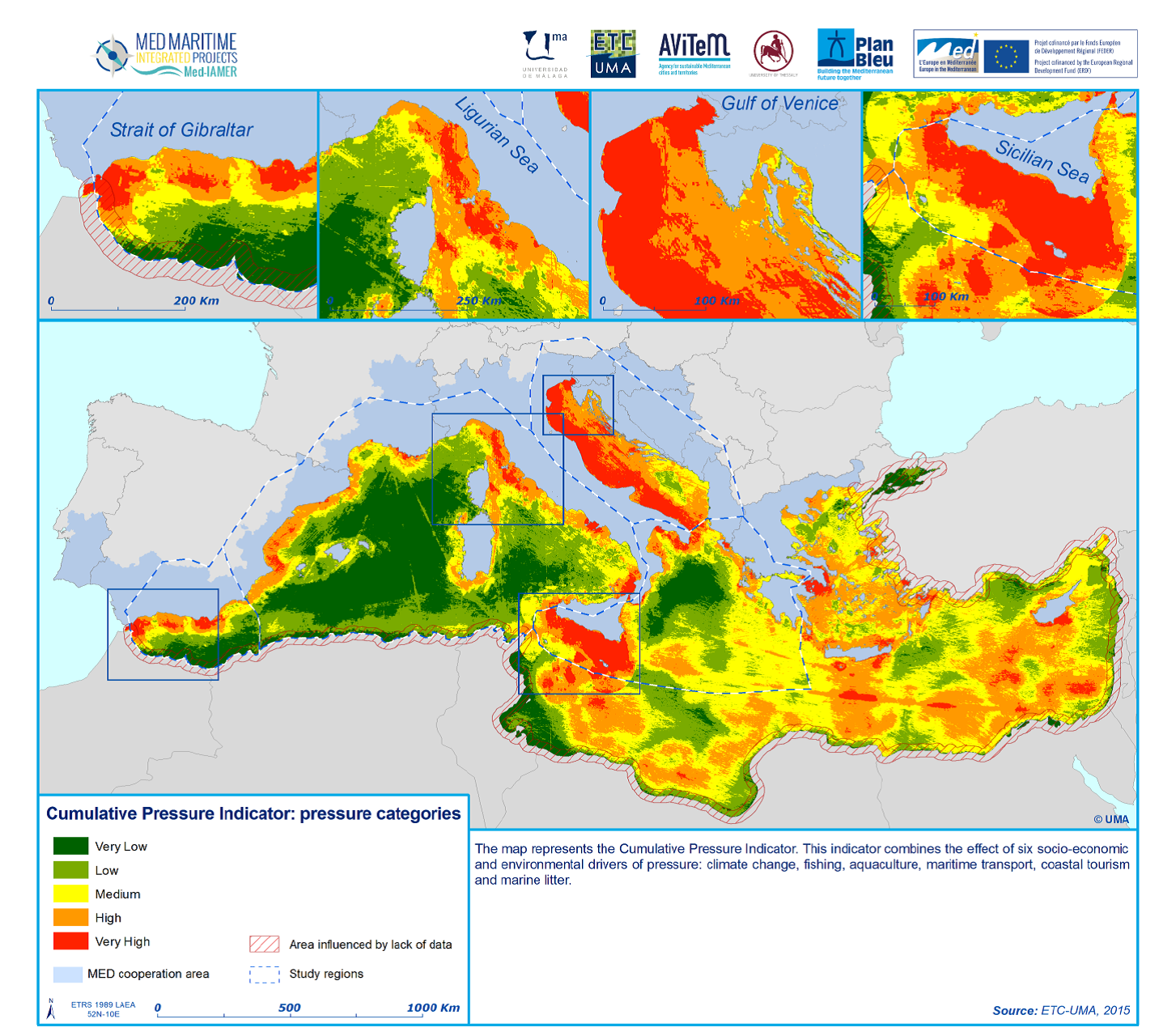 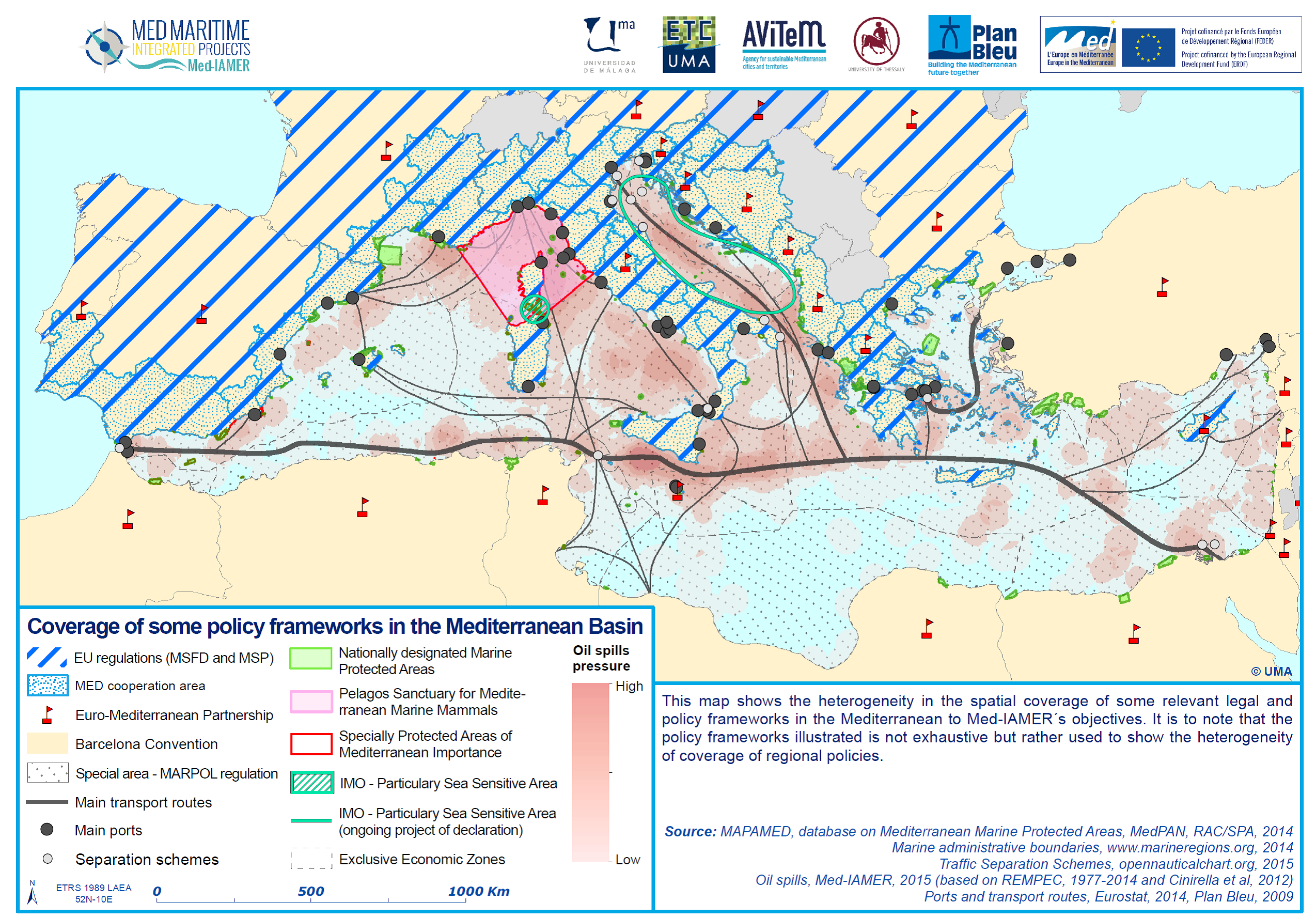 Collected data and related products (maps, indicators and fact-sheet) can be capitalized in other studies on the Mediterranean Sea or dealing with the two focus regions considered by Med-IAMER (Western Mediterranean and Adriatic-Ionian region). The methodology used for data collection, gap analysis and selection of indicators, framed with the DPSIR approach, can inspire applications in other Mediterranean projects or other sea basins characterized by multiples human drivers and pressures.

Maps, indicators and factsheets were developed within the Med-IAMER project (total project budget of 353,653.50 Euros), co-funded by the MED Programme – European Territorial Cooperation 2007-2013