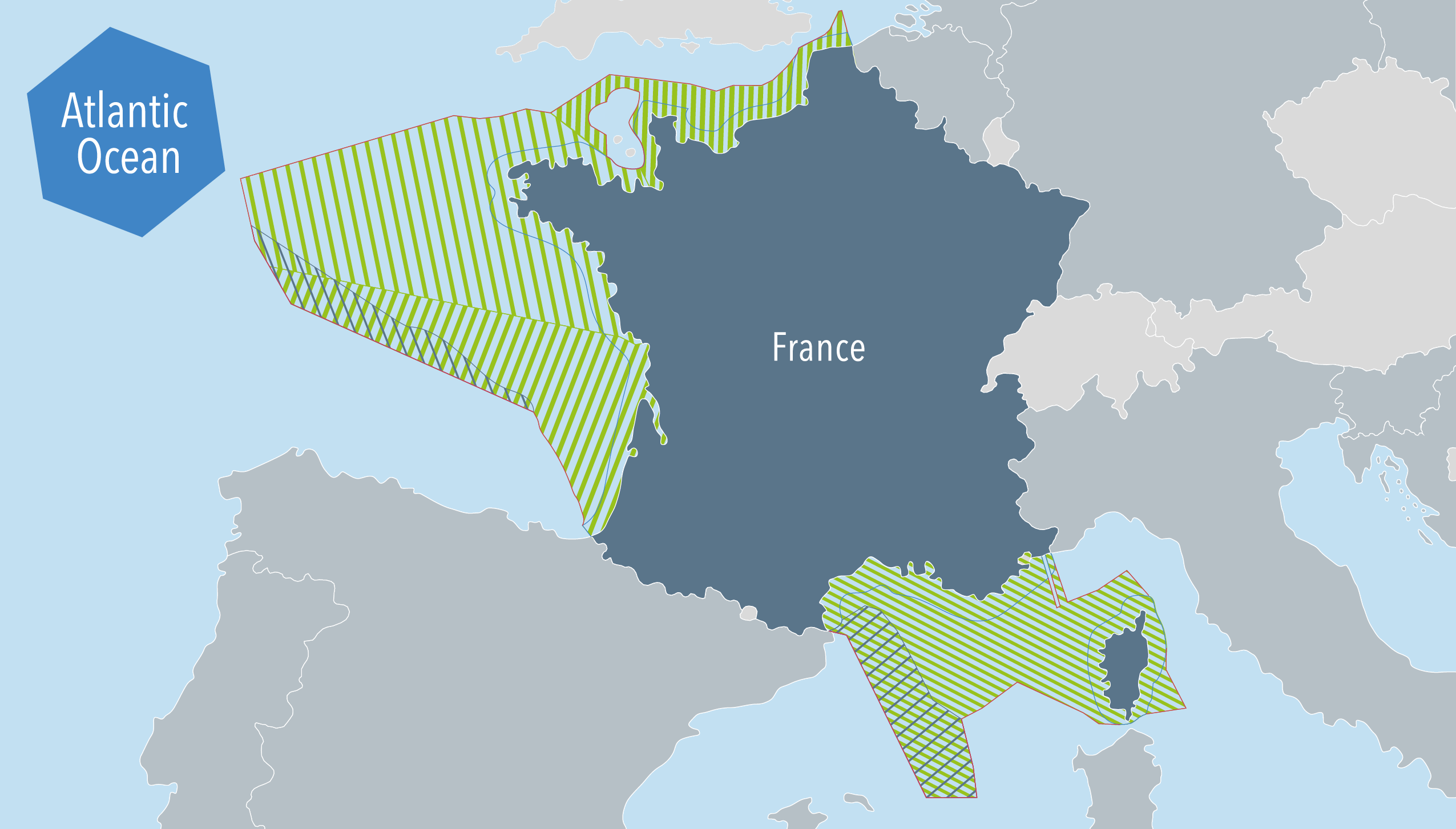 Disclaimer: The illustrative map shown on this page should not be interpreted as a legal representation of jurisdictional boundaries.

Sea basin strategy documents are the legal solution chosen by France to address the requirements of both MSFD and MSP Directive and specify the conditions for implementing the national strategy (SNML) according to local specificities.
The four strategic documents have been drafted in cooperation with stakeholders and have been subject to an environmental assessment by the French Environmental Authority. They have been submitted for public consultation until the 4th of June 2019 at: www.merlittoral2030.gouv.fr.

Public opinions were collected, and a summary report of the opinions expressed was produced. French institutions and neighbouring States consultations were also conducted during this period.
Following consultation with the public and concerned bodies, the first two parts of each sea-basin strategy were adopted by the coordinating Prefects in September/October 2019.
Regarding finalisation of the remaining two parts of Strategic Documents, the document was reviewed by the French National Environmental Agency on 5 May 2021 and an online public consultation on the operational aspects of the DSF with the four FSDs was launched from 20 May to 20 August 2021. From the online consultation, more than 700 comments were received on the four plans. The main remarks were on the land & sea interactions, the plan for monitoring and the allocated capacities for the implementation of a sustainable blue economy while recovering a good environmental status for the marine ecosystems.
Following the integration of the outcomes of the public consultation, the French State adopted the maritime spatial plans for each marine region in April/May 2022. They are available for each area (in French):

On 8 August 2016, the MSP Directive was transposed into French legislation through the entry into force of article123 of law n° 2016-1087 for the 2nd “reconquest of biodiversity, nature and landscapes”. The article modifies the French Environmental code through the introduction of the notion of maritime spatial planning defined as “the process by which the State defines and organises human activities at sea in an ecological, economic and social perspective. It does not apply to activities related to defense or national security”.

The law indicates the Sea basin strategy documents (documents stratégiques de façade – DSF) as the main tools through which MSP is implemented. In addition, article 123 introduces the National Strategy for the Seas and Coast into French legislation and simplifies policy governance on biodiversity through the merging of several existing regional agencies in two consultative bodies: the National Biodiversity Committee and the National Nature Conservation Council.

The modalities for implementing article 123 are further elaborated through the political decree n°2017-724 adopted on 3rd May 2017[2]. The text defines the scope, objectives and content of the document stratégique de façade as main tools through which each French coastline integrates and combines the implementation of several EU legislative texts and policies.