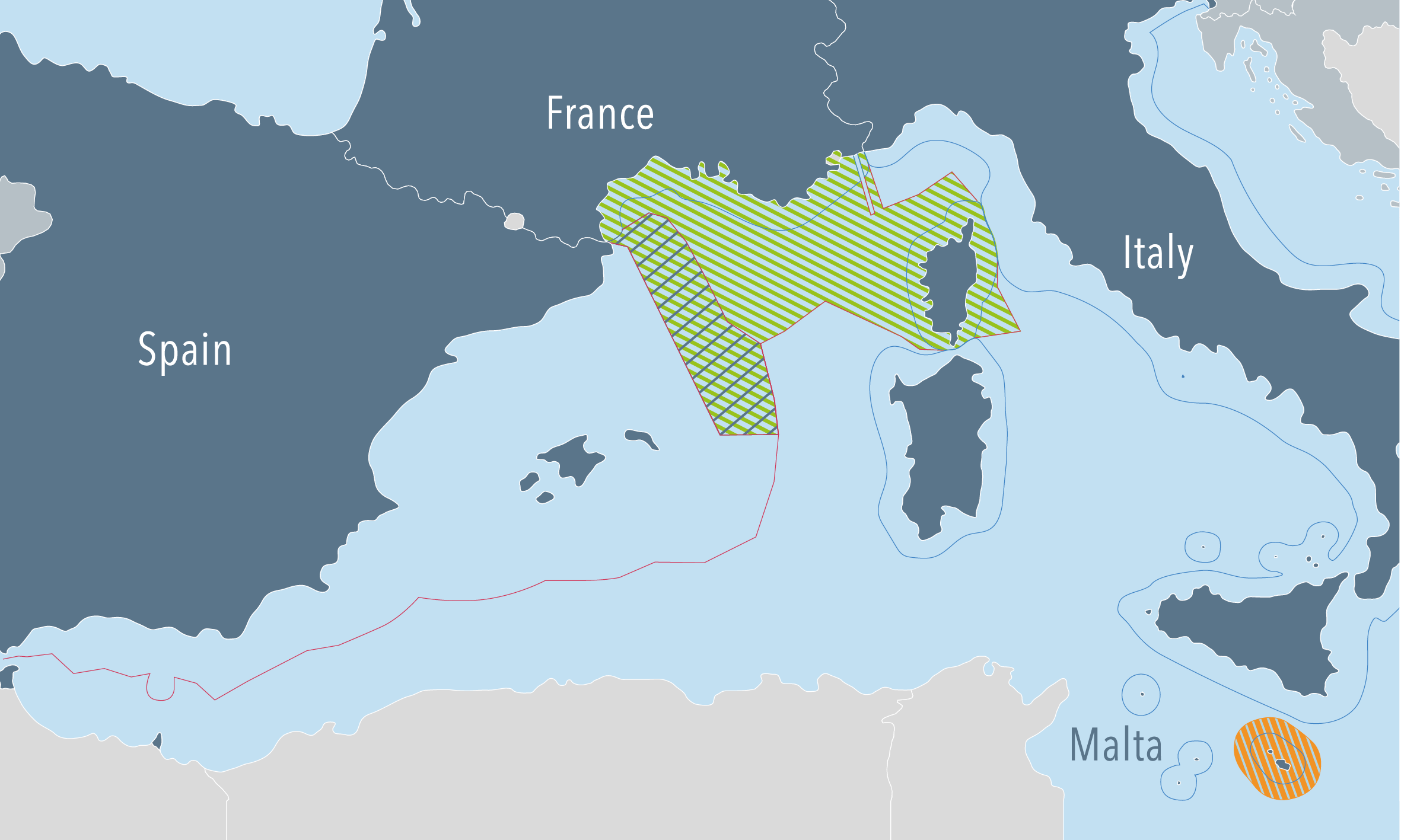 Evaluation of Spatially Managed Areas: do it yourself - MESMA

Sustainable financing of Marine Protected areas in the Mediterranean - MEDPAN

Indicators to measure sustainable development of coast and sea – PEGASO

Scenarios of marine economy for the EU Mediterranean countries - MEDTRENDS

Maps, Indicators and Factsheets for the Mediterranean sea region

Land Sea Interactions in the framework of MSP & ICZM

WestMED Initiative: Towards an Initiative for the sustainable development of the blue economy in the western Mediterranean​

Geoportal for the Alboran Sea – Alboran

Med PAN Visitor use observation and monitoring in Mediterranean marine protected areas, a Handbook for managers

Role of the regions: Future prospects and recommendations for the MSP directive implementation - SIMWESTMED

The Western Mediterranean is a traditional and consolidated tourist destination in the region, in particular its northern rim. Taken together, fisheries and aquaculture are the second most important activity in terms of GVA and employment. Goods transport (circa 700 million tons of freight and 14 million TEU traffic) represent close to 40% of Mediterranean values.

Human activities involve a number of environmental pressures causing high or very high environmental impacts in marine and/or coastal ecosystems. Maritime, but also land-based activities (including in particular the industrial sector- along with a progressively more urbanised coastline), are at the origin of a wide spectrum of environmental pressures, ranging from air and water pollution to waste generation. Today, overexploitation of fishing resources is ranked among the most important pressures in the region, along with biodiversity and habitat loss and contamination.

MSP in the Western Mediterranean

As all EU Member states, the nations are developing MSP to fulfil their requirements under the EU Directive for MSP to deliver maritime spatial planning by March 2021. The following MSP activities are underway.

The documents were approved for each sea basin after being drafted in cooperation with stakeholders as well as neighbouring countries and submitted to an environmental assessment by the French Environmental Authority.

Italy, through the Inter-Ministerial Coordination Table for Maritime Spatial Planning, produced Guidelines containing indications and criteria for the preparation of maritime spatial management plans (Decree of the Presidency of Council of Ministries, 1 December 2017, published in the Gazzetta Ufficiale on 24 January 2018, n. 19). The Guidelines include the identification of the marine areas to be considered for the preparation of maritime plans and the definition of the areas relevant in terms of land-sea interactions. Four marine areas have been identified, coherently with the definition of marine sub-regions under the Marine Strategy Framework Directive. Each area is composed of planning units with different types of “vocations” (generic, priority, limited, reserved) and include 42 strategic objectives. In June 2021, the Italian Government submitted its proposal for future MSP plans for the four Italian maritime regions to the European Commission. These plans were submitted to the Region’s Parliament (Giunta) for approval. Once approved they will be open for public debate in each of the Regions.

Malta approved The Strategic Plan for the Environment and Development (SPED) in 2015, replacing the Structure Plan for the Maltese Islands (adopted in 1992). The SPED formulates the strategic spatial policy framework for environment and development up to 2020, complementing the Government’s policy for the same period. It covers coastal zones and marine areas in a joint chapter as one distinct spatial unit within the National Spatial Framework and is limited to marine waters up to the 25nm limit of the Fisheries Management Conservation Zone (adopted by Council Regulation EC No. 1967/2006 under the EU Accession Treat, 2003). The competent authority designated is the Planning Authority (PA). In 2020, the Government of Malta called for a review of the SPED and as the Competent Authority for MSP, the Planning Authority has started the process which will be governed by the procedures set out in legislation.

Spainhas adopted legislation establishing a framework for MSP and has created the Inter-Ministerial Commission on Marine Strategies. Competencies on maritime and coastal affairs are shared between central and regional governments, including those facing the Atlantic. A first draft of the Maritime Spatial Plan (POEM), together with the Initial Strategic Document, was subject to a strategic environmental assessment process and opened to administrative and public consultation. Once public consultation was finalised, a transboundary consultation with neighbouring countries was launched, and a specific online meeting with France, Portugal and Italy was held. In July 2022, the Competent Authority finalised the integration of the observations received during the public consultation process and the decision-making regarding certain high potential and priority-use areas established within the plans. The final documents have been submitted to the environmental assessment competent authority in order to complete the strategic environmental assessment process. Once the strategic environmental document has been published, the plans will be submitted to the Council of Ministers to obtain approval for them by Royal Decree before the end of 2022. The first cycle of the plans, including the implementation of measures and the monitoring, will take place between 2022 and 2027.

Cooperation between Member States in Western Mediterranean has been promoted through several actions initiated by organisations such as the UNEP/MAP, or the working group on IMP-MED. Further cooperation has also been developed thanks to projects such as SIMWESTMED (Supporting Maritime Spatial Planning in the Western Mediterranean region) or AMPAMED (Areas Marinas Protegidas del Mediterráneo) which carried out cross-border initiatives in the region.

UNEP/MAP was firstly created to address marine pollution issues and includes now integrated coastal zone spatial planning (ICZM) and ecosystem-based management (EBM). Within ICZM and EBM, it promotes MSP. The 20th Ordinary Meeting of the Contracting Parties to the Barcelona Convention, held in December 2017 in Tirana (Albania), adopted the “Conceptual Framework for Marine Spatial Planning” in the Mediterranean Sea. The Conceptual Framework for MSP is recognized as a guiding document to facilitate the introduction of this management tool into the implementation of ICZM  through the relevant regional framework and within the system of the Barcelona Convention and its Protocols. MSP-related aspects are also addressed, for example through the Coastal Area Management Programme (CAMPs) managed by PAP/RAC.  Moreover, SPA/RAC is active in the field of MSP with some joint actions with the EC to promote establishing SPAMIs (Special Protected Areas of Mediterranean Interest) in open seas, including deep seas (MedOpenSea project). In addition to that, it is involved in other actions targeting the definition of EBSAs (Ecologically and Biologically Significant Areas) in the Mediterranean, under the framework of the Convention for Biological Diversity (CBD).One of UNEP MAP’s initiatives is the creation of supporting infrastructures, the Regional Activity Centres (RACs). Their main objective is to promote information sharing and communications between MAP stakeholders and the wider user community. There are six Regional Activity Centres across the Mediterranean:

Finally, The MED POL Programme is responsible for the follow up work related to the implementation of the LBS Protocol, the Protocol for the Protection of the Mediterranean Sea against Pollution from Land-Based Sources and Activities and of the dumping and Hazardous Wastes Protocols.

UNEP/MAP was firstly created to address marine pollution issues and includes now integrated coastal zone spatial planning (ICZM) and ecosystem-based management (EBM). Within ICZM and EBM, it promotes MSP, for example through the Coastal Area Management Programmes (CAMPs) managed by PAP/RAC. SPA/RAC is active in the field of MSP with some joint actions with the EC to promote establishing SPAMIs (Special Protected Areas of Mediterranean Interest) in open seas, including deep seas (MedOpenSea project). In addition to that, it is involved in other actions targeting the definition of EBSAs (Ecologically and Biologically Significant Areas) in the Mediterranean, under the framework of the Convention for Biological Diversity (CBD).

The first meeting of the Working Group on IMP-MED took place in December 2009. It gathers representatives of the EU and its Member States together with non-EU Mediterranean countries for discussing and reviewing the implementation of the IMP-MED project, which aims at promoting an integrated approach for maritime management within the Mediterranean through regional meetings, technical regional workshops and technical assistance.

In December 2014, the CPMR Intermediterranean Commission set a working group on Transport and Integrated Maritime Policy to support regional authorities in improving governance and coordination in the implementation of EU maritime and transport policies in the Mediterranean. Themes covered include MSP.

Union for the Mediterranean (UfM)

The Union for the Mediterranean is an intergovernmental organisation aimed at bringing together the 28 EU MS and the 15 southern and eastern Mediterranean countries, to enhance regional cooperation and dialogue in the Euro-Mediterranean region. Established in 2008 under the French Presidency of the EU, it built on processes that had emerged and achieved progress in the previous years, notably the Euro-Mediterranean Partnership (EMP).

The creation in 1996 of the MCSD by the Contracting Parties conveys their commitment to sustainable development and to the effective implementation, at the regional and national levels, of the decisions of the Earth Summit and the United Nations Commission for Sustainable Development. The MCSD is made up of 40 members: 22 permanent, representing each of the Contracting Parties to the Barcelona Convention, as well as 18 rotating representatives from wider community. The MCSD has provided major inputs to the formulation of the Mediterranean Strategy for Sustainable Development (MSSD) and spearheads its implementation at the country level.

The Strategic Partnership for the Mediterranean Sea Large Marine Ecosystem (MedPartnership) is a collective effort of leading environmental institutions and organizations together with countries sharing the Mediterranean Sea to address the main environmental challenges that Mediterranean marine and coastal ecosystems face. The MedPartnership is being led by UNEP/MAP and is financially supported by the Global Environment Facility (GEF), and other donors, including the European Commission and all participating countries.

The Bologna Charter is a policy document aiming at strengthening the role of coastal administrations in the context of European policies and initiatives at the Mediterranean scale related to: coastal protection, integrated management, adaptation to climate change. The Charter also promotes and outlines a Macro-Project initiatives for the current programming period of the European Structural Funds (2014-2020), designed for a coherent Mediterranean macro-thematic and multi-sectoral strategy. The Macro-Project is detailed in the Joint Action Plan. Although the main focus is on coastal planning, management and adaptation to climate change, MSP approaches and principles are clearly considered relevant and taken in consideration by the Charter and the Action Plan.

The International Network of Basin Organizations has as main objectives to: (i) develop permanent relations with the organizations interested in comprehensive river basin management, and facilitate exchanges of experiences and expertise among them; (ii)  promote the principles and means of sound water management in cooperation programmes to reach sustainable development, (iii) facilitate the implementation of tools for institutional and financial management, for programming, for the organization of data bases, and of models adapted to the needs.

The main objective of AViTeM is to establish a mechanism for the exchange of experience, expertise, cooperation and training, to enable promotion of integrated and exemplary initiatives of urban and territorial development in the countries of the Union for the Mediterranean. It is a response to strong demand of cooperation from Mediterranean countries in the areas of processes, tools and methods, for the implementation of effective urban and territorial planning against a backdrop of regionalisation and decentralisation.

The 5+5 ministerial meetings is an intergovernmental cooperation initiative between Malta, Italy, France, Spain, Portugal, Mauritania, Morocco, Algeria, Tunisia, and Libya. It was launched in 1990. 5+5 is steered through Ministerial Conferences of ministers of Foreign Affairs. There is no permanent secretariat. In principle, the 5+5 Dialogue covers any cooperation field between partners.

Dedicated themes on which ministerial stood:

A five-nation sub-region grouping that brings together Algeria, Libya, Mauritania, Morocco and Tunisia working on several issues related to the promotion of economic integration in the Maghreb, especially the creation of the proposed Maghreb Bank for Investment and External Trade and launching a Maghreb free zone.

Network of Marine Protected Area Managers in the Mediterranean (MedPAN)

Mediterranean Association of the National Agencies for Energy Conservation (MEDENER)

CETMO centre for Transportation Studies for the Western Mediterranean (CETMO)