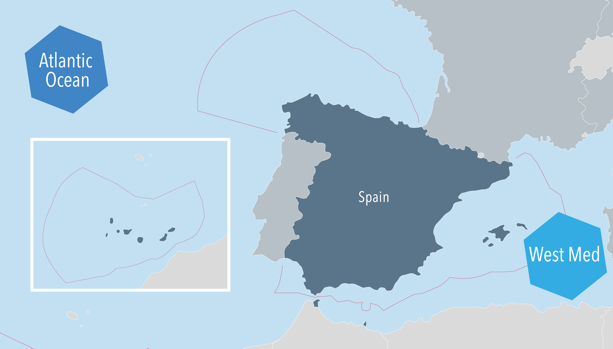 There are currently no maritime spatial plans in Spain.

However, Spain is moving forward on the technical development of Maritime Spatial Planning and is in the process of approving its MSPs, one for each of its five marine subdivisions. Approval is expected before the end of 2022. The public consultation for the draft plans has been finalised, including the draft royal decree for approval of the plans, as well as the strategic environmental assessment study. The transboundary consultation with neighbouring countries has been launched, and a specific online meeting with France, Portugal and Italy was held on 6 September 2021.

A first draft of the Maritime Spatial Plan (POEM), together with the Initial Strategic Document, was subject to a strategic environmental assessment process and opened to administrative and public consultation. Once public consultation was finalised, a transboundary consultation with neighbouring countries was launched, and a specific online meeting with France, Portugal and Italy was held. In July 2022, the Competent Authority finalised the integration of the observations received during the public consultation process and the decision-making regarding certain high potential and priority-use areas established within the plans. The final documents have been submitted to the environmental assessment competent authority in order to complete the strategic environmental assessment process. Once the strategic environmental document has been published, the plans will be submitted to the Council of Ministers to obtain approval for them by Royal Decree before the end of 2022. The first cycle of the plans, including the implementation of measures and the monitoring, will take place between 2022 and 2027.

The documents subject to public consultation can be consulted and downloaded here: https://www.miteco.gob.es/es/costas/participacion-publica/00-consulta-am...

The geographical information is in the geoportal: http://www.infomar.miteco.es

Spain adopted the Royal Decree 363/2017 of 8 April establishing a framework for maritime spatial planning, that transposes into Spanish legislation the Directive 2014/89/EC of the European Parliament and of the Council of 23 July.

Assistant Deputy Director for the Protection of the Sea
MMGil@miteco.es