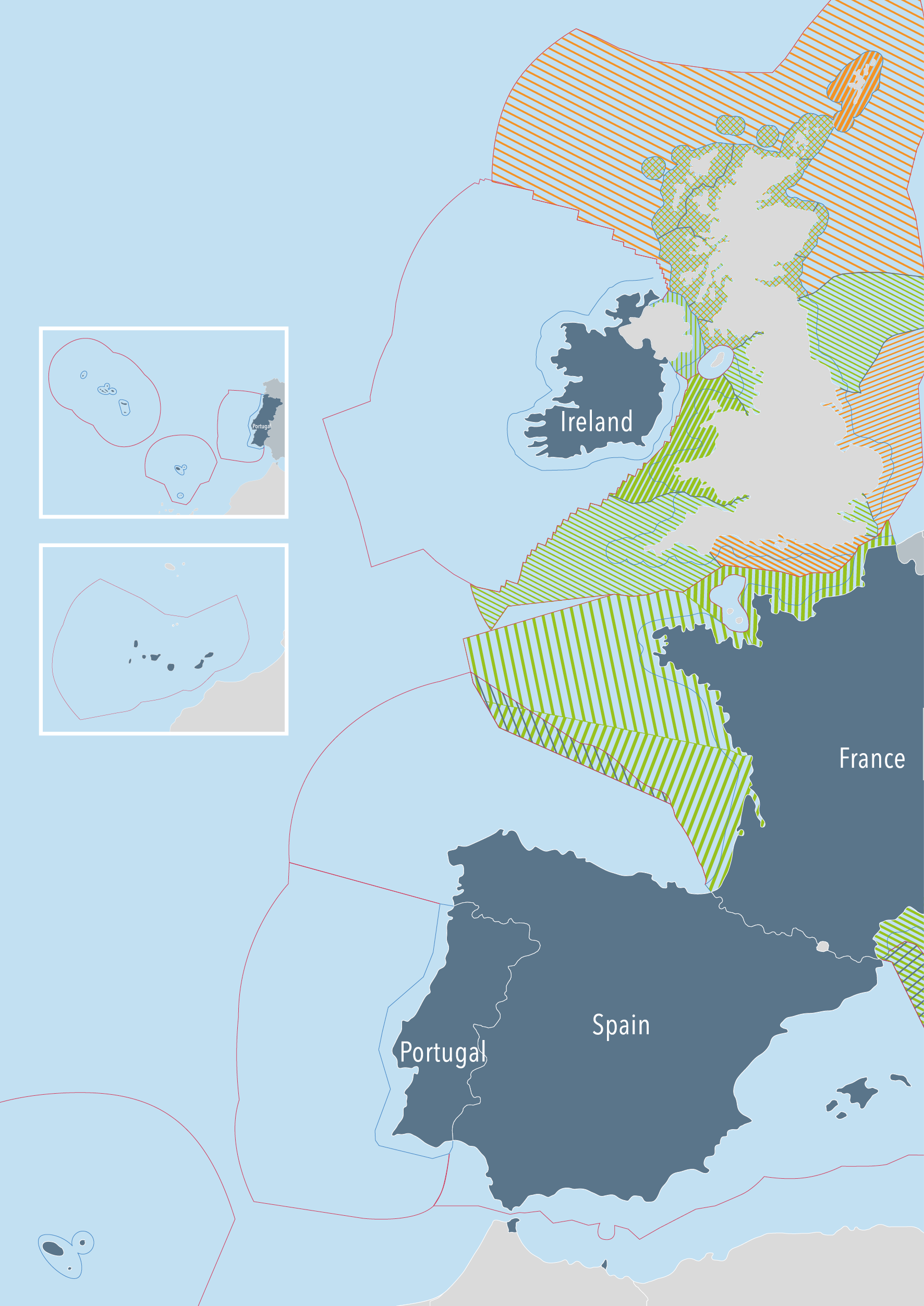 EU-ATLAS: A trans-Atlantic assessment and deep-water ecosystem based spatial management plan for Europe

Role of the regions: Future prospects and recommendations for the MSP directive implementation - SIMNORAT

General Introduction to the European Atlantic

The European (North East) Atlantic borders four Member States (Ireland, France, Spain and Portugal), covering a vast area and a diverse range of ecosystems. More broadly, these ecosystems are split into the Celtic Seas, Bay of Biscay and Iberian Coast. Given the size of this region, there are great variations in physical and biological conditions. To the north, the Celtic Seas are characterised by relatively shallow waters and a gently sloping continental shelf. Along the coastline are several sea lochs, brackish estuarine systems and maerl beds that support cold-water fish species, seabirds and cetaceans such as dolphins and basking shark. In contrast the waters of the Bay of Biscay and Iberian Peninsula drop away steeply to a depth of over 5000m and support a wide range of cold-water corals, sponges and pelagic species.

In terms of sea uses, fishing is a major sector within the Atlantic, whilst coastal tourism and shipping are of great importance to all Member States bordering this area. In particular, the Gibraltar Strait and the English Channel act as major shipping gateways connecting Europe with the wider world. Whilst there is limited oil and gas production in the European Atlantic, this region has high potential for the development of offshore renewable energy given its favourable physical and climatic conditions for wind, tidal and wave energy devices.

All five of the Atlantic Member States (including the UK) have defined their EEZ in the Atlantic. On 19 May 2006, France, Ireland, Spain and the United Kingdom of Great Britain and Northern Ireland (hereinafter referred to as the “four coastal States”) collectively submitted, through the Secretary-General of the United Nations to the Commission on the Limits of the Continental Shelf, information on the limits of the continental shelf appurtenant to these four coastal States in the area of the Celtic Sea and the Bay of Biscay, lying beyond 200 nautical miles from the baselines from which the territorial seas are measured, in accordance with Article 76, paragraph 8 of the United Nations Convention on the Law of the Sea. Portugal submitted a claim to extend its jurisdiction over the neighbouring continental shelf in May 2009, which is still under examination after reservation from Morocco in July 2015.

MSP in the Atlantic

As any EU Member states, the nations are developing MSP to fulfil their requirements under the EU Directive for MSP, to deliver maritime spatial planning by March 2021. The following MSP activity is under way.

The documents were approved for each sea basin after being drafted in cooperation with stakeholders as well as neighbouring countries and submitted to an environmental assessment by the French Environmental Authority.

Ireland has set out its vision, high-level goals, and key actions to enable its marine potential to be realised (see Harnessing Our Ocean Wealth). The MSP Directive has been transposed into Irish Law and the competent authority for MSP is the Minister for Housing, Planning, Community and Local Government. The National Marine Planning Framework Baseline Report was published on 18 September 2018 followed by a series of regional public and stakeholder events held nationally throughout October 2018. A first NMPF draft was published in November 2019 and was open for public consultation until April 2020. As chapters were amended, relevant Government Departments were consulted to obtain approval for the updates being made. A final version of the plan was submitted to the Oireachtas (Irish Parliament) for consideration as required by the legislation underpinning marine spatial planning in Ireland. The plan was submitted and discussed by Dáil Éireann (lower house of the Oireacthas) on 29 March 2021. The final NMPF approval was confirmed on 1 July 2021. The full text of the Maritime Area Planning Bill 2021 and accompanying Explanatory Memorandum were published on Monday 16 August 2021 and was sent to the Dáil Éireann on 1 December 2021 and was transferred to the Seanad for adoption.

Portugal approved legislation for MSP for all Portuguese maritime space consecutively in 2014 and in in 2015. The competent authority for MSP is the Minister of the Sea. The Situation Plan (PSOEM) corresponding to the subdivision of the mainland, the subdivision of Madeira and the subdivision of the Extended Continental Shelf was approved in December 2019 by the Council of Ministers (Resolution No. 203-A/2019) after two cycles of public consultation (2018 and 2019). A website and a geoportal have been created with all of the information regarding Portuguese maritime spatial planning, and  the relevant information is kept up to date. The Situation Plan for Azores (PSOEMA) is still pending.

Spain has adopted legislation establishing a framework for MSP and has created the Inter-Ministerial Commission on Marine Strategies. Competencies on maritime and coastal affairs are shared between central and regional governments, including those facing the Atlantic. A first draft of the Maritime Spatial Plan (POEM), together with the Initial Strategic Document, was subject to the strategic environmental assessment process and opened to administrative and public consultation. Once public consultation was finalised, a transboundary consultation with neighbouring countries was launched, and a specific online meeting with France, Portugal and Italy was held. In July 2022, the Competent Authority finalised the integration of the observations received during the public consultation process and the decision-making regarding certain high potential and priority-use areas established within the plans. The final documents have been submitted to the environmental assessment competent authority in order to complete the strategic environmental assessment process. Once the strategic environmental document has been published, the plans will be submitted to the Council of Ministers to obtain approval for them by Royal Decree before the end of 2022. The first cycle of the plans, including the implementation of measures and the monitoring, will take place between 2022 and 2027.

The OSPAR Commission was established in 1992 as the mechanism for governments to cooperate on implementation of the Convention for the Protection of the Marine Environment of the North East Atlantic. OSPAR works on a number of fields including biodiversity and ecosystems, hazardous and radioactive substances, human activities and offshore industries.

For the European Atlantic area, MSP is still in its infancy and as a result cooperation between Member States has been limited. In the north eastern Atlantic, formal structures such as the British Irish Council have conducted high level meetings on MSP, however further cooperation has been restricted to participation in a small number of projects, such as TPEA (Transboundary Planning in the European Atlantic) and the newly established SIMCelt (Supporting Implementation of Maritime Spatial Planning in the Celtic Seas) project.

The British-Irish Council was established in 1998 to promote positive relationships between the people of the British Isles (8 administrations including England, Scotland, Wales, Northern Ireland, the Isle of Man, Ireland, Guernsey and Jersey) and provide a forum for consultation and cooperation. The BIC operates at a high level, with annual meetings of heads of government and sectoral (ministerial and official) level. The work of the BIC is split across different priority areas of work, including the environment (which includes marine), collaborative spatial planning and energy.

The Atlantic Arc Commission is one of the Conference of Peripheral Maritime Region’s 6 geographical Commissions and contains members comprised of local and regional authorities from the UK, Ireland, northern Spain, Portugal and France.

Conference of the Atlantic Arc Cities

CAAC is a network of territorial cooperation, based on the particular identity and challenges of Atlantic Cities. It facilitates cooperation among its members and with other actors, creating awareness in the European institutions about issues concerning the Atlantic Cities.