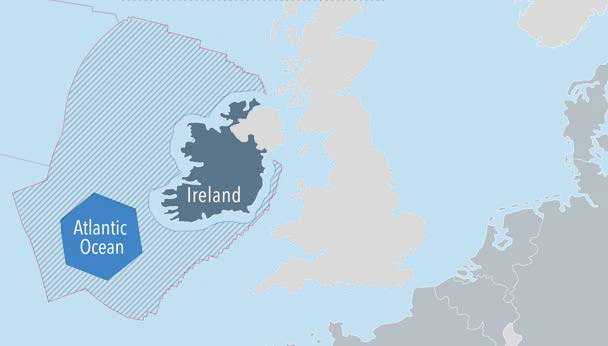 The National Marine Planning Framework (NMPF) is Ireland’s national marine plan. The NMPF is the overarching framework for decision-making that is consistent, evidence-based and secures a sustainable future for the marine area.

The Maritime Spatial Plan for Ireland is available here: https://www.gov.ie/en/publication/60e57-national-marine-planning-framework/

A web map portal was also launched to link planning within the Maritime area and the relevant policies for each marine sector or activity listed in the National Marine Planning Framework (NMPF). The site has 3 main areas: Activities Map, Activities and Policies Map. The MSP information hub lists all Government Departments and Agencies with a role in the Maritime area and hosts the MSP newsletter which is published on quarterly basis

The first milestone in the process was the publication of a report setting out the context in which the NMPF is to be developed and subsequent consultations, also helping to identify the key issues marine planning needs to address. The National Marine Planning Framework Baseline Report was published on 18 September 2018. A series of regional public and stakeholder events were held nationally throughout October 2018 to launch the report and to inform and support public and stakeholder participation.

A first NMPF draft was published in November 2019 and was open for public consultation until April 2020. There were over 3,500 comments to consider from 225 submissions including those provided by neighbouring states.

As chapters were amended, relevant Government Departments were consulted to obtain approval for the updates being made. A final version of the plan was submitted to the Oireachtas (Irish Parliament) for consideration as required by the legislation underpinning marine spatial planning in Ireland. The plan was submitted and discussed by Dáil Éireann (lower house of the Oireacthas) on 29 March 2021. This publication was approved at Cabinet on 29 June 2021 and confirmed by An Taoiseach Michéal Martin TD on 1 July 2021, alongside Ministers Darragh O’Brien TD, Eamon Ryan TD and Peter Burke TD at the Commissioners for Irish Lights Headquarters in Dún Laoghaire.

The full text of the Maritime Area Planning Bill 2021 and accompanying Explanatory Memorandum were published on Monday 16 August 2021.  It passed on 17 December 2021 through all stages of the Oireachta. The Maritime Area Planning Bill establishes in law a new marine planning system, underpinned by a statutory Marine Planning Policy Statement and guided by the National Marine Planning Framework. This legislation intends to put in place a comprehensive and coherent planning system for the entire Maritime Area. This Bill gives legal underpinning to an entirely new marine planning system, which balances Irish offshore wind energy potential with the need to protect the marine environment. It will also introduce a new independent agency, MARA, which will be based in Wexford and will focus solely on the regulation of the maritime area.

The Irish Government had already defined an Integrated Marine Plan for Ireland in 2012 (Harnessing Our Ocean Wealth). This plan set out the national vision, high-level goals, and key ‘enabling’ actions to put in place the appropriate policy, governance and business climate to enable Ireland’s marine potential to be realised.

The MSP Directive was originally transposed into national legislation by way of regulations made in 2016 (SI 352 of 2016). Since the regulations were made under the European Communities Act 1972, they were strictly limited to measures required to transpose the Directive. In October 2018, the regulations were repealed and replaced by Part 5 of the Planning and Development (Amendment) Act 2018.

Ireland’s Competent Authority for MSP is the Department of Housing, Local Government and Heritage (DHLGH)
www.housing.gov.ie