The first part of the study presents for each of the eleven MSFD descriptors the methodologies used in the Initial Assessments (IAs) and Good Environmental Status (GES) draft reports of the European Mediterranean and Black Sea countries, for which reports have been submitted. The second part aims to assess an indicative gap score for each descriptor, by considering the main kinds of gaps highlighted by the countries in their IAs and GES reports.

The overall scientific objectives of PERSEUS project are to identify the interacting patterns of natural and human-derived pressures on the Mediterranean and Black Seas, assess their impact on marine ecosystems and, using the objectives and principles of the Marine Strategy Framework Directive as a vehicle, to design an effective and innovative research governance framework based on sound scientific knowledge.

Work package 5 (Basin-wide promotion of MSFD principles) aims to strengthen networking and increase the SES capacity for ecosystem state assessment, definition of Good Environmental Status, monitoring and management based on the 11 MSFD descriptors, and to provide tools for the application of MSFD principles in non-EU countries of the SES.

The implementation of the MSFD is composed by five successive steps, which follow a six-year iterative process:

The MSFD is organized under 11 descriptors, defined in Annex I of the MSDF:

Criteria and indicators, as well as generic methodological standards have been specified by the Commission Decision 2010/477/EU from 1st September 2010[1]. For the three first steps to be produced for 2012 (Initial Assessment, characterization of the Good Environmental Status, and definition of Environmental Target), the Member States have used existing assessment elements or have developed or adopted other ones that fit the specific requirements of the directive. Methodological procedures have been outlined in the framework of the MSFD task groups (JRC 2010), in the framework of the Regional Sea Conventions or of international commissions.

The main objective of the study is to identify, develop and promote tools and methods to assess environmental status across the Mediterranean Sea and the Black Sea basins with emphasis on non-EU countries, in accordance with the principles and objectives of the Marine Strategy Framework Directive (MSFD), 2008/56/EC. 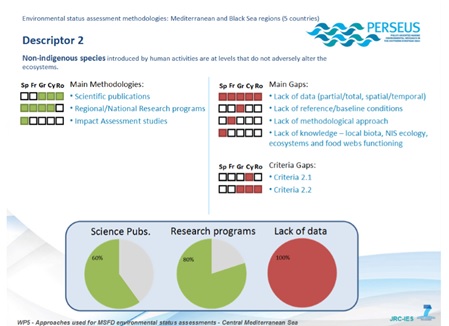 In the analysis, the information collected in the framework of task 5.1 for the European and Mediterranean countries (France, Spain, Greece, Romania and Cyprus) is considered. This information has been extracted from the draft national reports on MSFD Articles 8, 9 and 10, produced in 2012 for the first step of the MSFD implementation (Initial Assessments and GES definition reports).

The analysis is organized per descriptor. For each of the eleven descriptors, the following elements are included:

The practice is fully applicable in other contexts, as it provides a framework and methodology for similar studies and analyses.