As main output of the SNIMar project, which aims to develop a technological solution (a geoportal) that will gather and display the information on the marine environment collected by different entities, the SNIMar Geoportal is a thematic infrastructure of the National Geographic Information System (SNIG), which is managed by the Directorate-General for Territorial Development. In line with the INSPIRE Directive, the National Geographic Information System is connected with a European spatial data infrastructure, the INPIRE geoportal, that aids the decision-making of community environmental policies and other policies or activities which may have an impact on the environment.

The SNIMar geoportal is a key tool for the environmental management of the Portuguese marine waters, contributing to the implementation of the Marine Strategy Framework Directive (MSFD) and the Maritime Spatial Planning Directive (MSP), since it simplifies the sharing, searching and accessing to metadata and marine data, particularly useful for public administration, universities and research institutes..

Good management of the sea requires robust information about the marine environment and human activities occurring at sea and in coastal areas. In Portugal, this marine information is collected and processed by several public and private entities from different marine-related areas of activity. However, each entity collects the specific data it needs using its own methodologies and generally without knowledge of the type of data that other entities hold. This disconnect between entities leads to the duplication of data collection efforts and makes it difficult to know what data exist and where they are.

The mission of the SNIMar project was to develop a technological solution that would increase the capacity to assess the environmental status of Portuguese marine waters, a priority defined by the Marine Strategy Framework Directive (MSFD). This led to the creation of SNIMar - the National Marine Information System [Sistema Nacional de Informação do Mar]. SNIMar is a geoportal that centralizes the marine information of the various entities, facilitating its sharing, search and access. The SNIMar geoportal maximizes the effort expended by each institution in collecting data and contributes to the advancement of the marine sciences.

The main objectives of the SINMar geoportal is to provide a unique point of access of marine and coastal information which is shared among different platforms.

The geoportal also aims for the following objectives::

The SNIMar geoportal is supported by a spatial data infrastructure (SDI) that acts as a central point of aggregation, search and access to geographic information about the Portuguese marine environment.

The SNIMar geoportal allows users to search for marine information in the metadata catalogue, and to view and download data. The geoportal that is available to the public, however, is like the “tip of an iceberg” as it is the “visible” part of the spatial data infrastructure (SDI) that supports it. 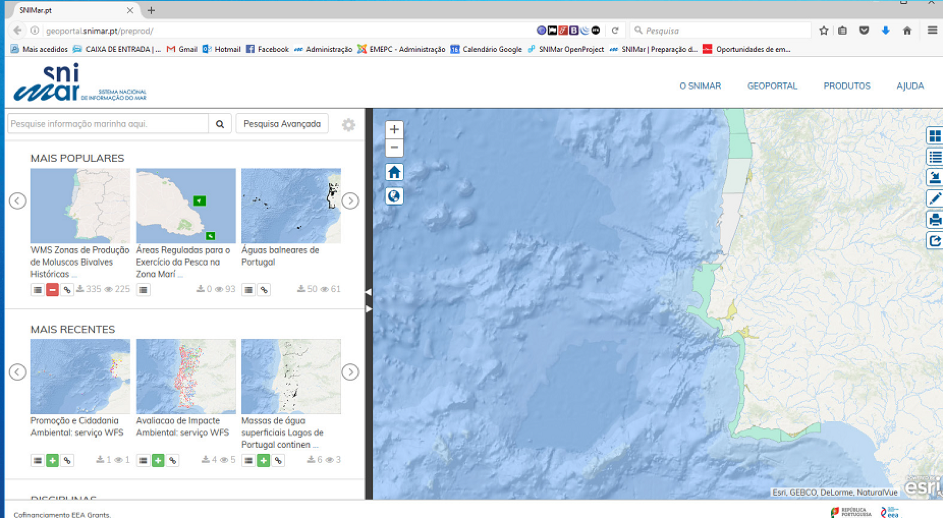 This SDI includes the development of several products that guarantee that the access, search and sharing of information in the geoportal is user-friendly, comprehensive and perfectly adapted to marine issues. These products include: 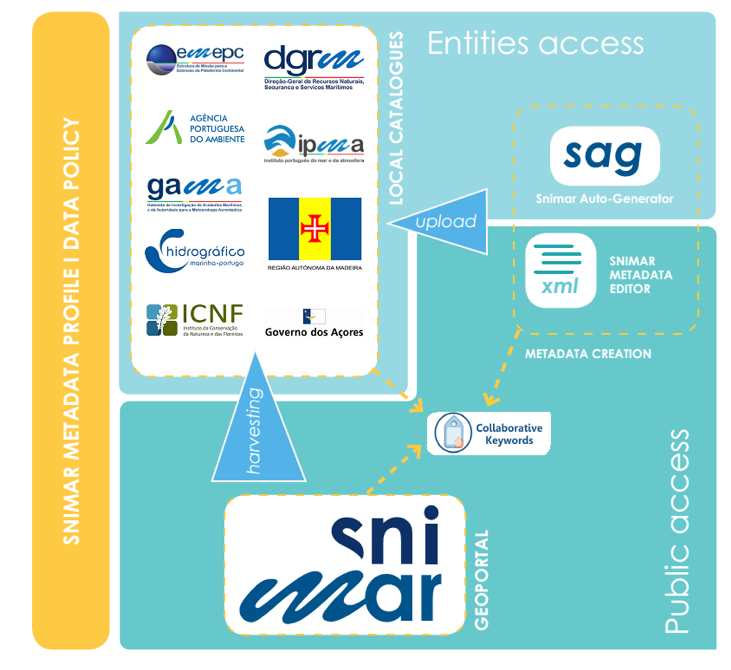 Establishes the guidelines for creating the metadata to be included in the geoportal. To ensure that the metadata are catalogued in a harmonized way, the SNIMar metadata profile is based on the National Geographic Information Metadata  Profile (MIG  Profile), which is based on the ISO 19115 and ISO 19119 standards and the requirements of the INSPIRE Directive. In addition, it includes marine-related keyword fields.

Is a Quantum GIS plug-in that can be installed on any computer, allowing any developer to create metadata.

3. The local catalogues (for each associated entity) (Fig. 2):

To ensure the presence of marine-related keywords, the Collaborative Keywords application was developed. It contains standardized lists of marine-related keywords - the SNIMar Thesaurus, a “dictionary of the sea”. When creating metadata, the SNIMar Thesaurus is used as a reference for choosing appropriate and harmonized keywords that strongly characterize marine information. The Collaborative Keywords application also relates keywords to each other, ensuring that the search results are as comprehensive and relevant as possible.

SAG is an application that automatically creates metadata and geospatial products for entities that have a large amount of organized information. However, it requires specific technological development tailored to the different data organization of each entity. This SAG allows entities providing large amounts of data and information not having to go through each record metadata and translating it to that used by the local catalogues of the SDI. 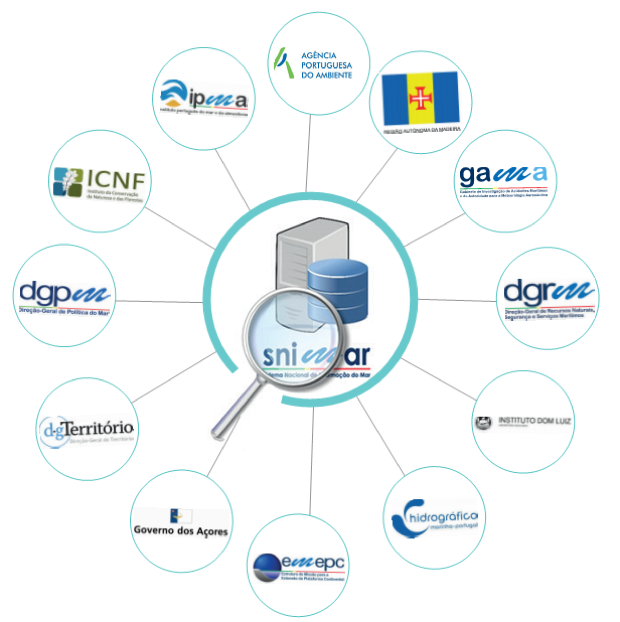 The SNIMar geoportal with more than 5000 outputs is the main result. This geoportal sets apart from other geoportals because it has been specifically developed to the Portuguese context and aligned with marine-related disciplines and keywords. Another point of strength is that it is based on a shared infrastructure including different nodes. Each node is responsible for its own data and metadata; thus effort (to manage, update, quality check) data and metadata are shared among different institutions.

The SNIMar geoportal is an internet portal that allows public access to the information published. Through the geoportal it is possible to: search in the metadata catalogue and visualize and download data.

Developed in ESRI open-source technology, the SINMar geoportal allows for the transparency and reproducibility of the process. To guarantee the sustainability of the SNIMar geoportal, the project developed a data sharing policy to establish the guidelines for information sharing between the partner entities that provide information through the geoportal.

At the same time, the geoportal can serve as data input source to major international marine data sets or geodatabases. 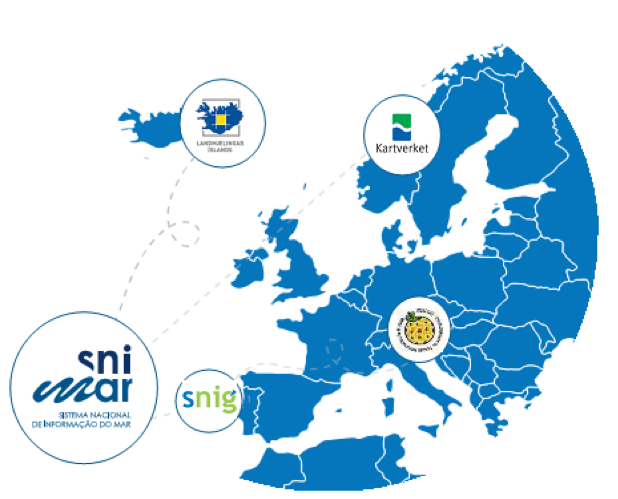