This project aimed to gain a better understanding of decision-making using adopted marine plans in England (UK).  Investigations were carried out into who makes decisions using marine plans as defined by the Marine and Coastal Access Act 2009. The project identified a total of 29 government bodies, agencies and other public bodies who are involved with 46 types of decisions. The research also identified where marine plan use may be relevant to advisory bodies and functions.

How and where are marine plans being used by decision-makers in public bodies?

The study was conducted specifically for implementation of marine plans developed by the UK Marine Management Organisation (MMO).

An initial desk study scoped the decisions and decision-makers thought to be encompassed under the Marine and Coastal Access Act (2009) definition of decisions to be informed by marine plans. Process maps were drafted to illustrate the steps and stakeholders involved in making a decision. This information guides the Marine Management Organisation (MMO) and other decision makers about when marine plans could be used in the generic decision-making processes, and similarly when the decision-making process could inform the development and monitoring of marine plans.

To verify initial process maps, questionnaires were sent and interviews undertaken with a sample of decision-makers. Information collected from decision makers included respondent roles, legislation relevant to their decision-making, and policy outcomes for the decisions they make in accordance with marine plans. Information was also gathered about the respondents’ awareness of marine plans and marine plan policies, and how marine plans are (or may be) used in decision- making. To support presentation of project findings, respondents were also asked for the preferred format and function for capturing decision-making responsibilities and processes of those using marine plans, and the preferred method to communicate the availability and function of process maps. Questionnaire and interview findings were used to revise content and shape outputs of the decision mapping.

The study identified a total of 29 government bodies, agencies and other public bodies (see table 36), which cover 46 decisions that should be informed by marine plans (i.e. decisions set out in section 58(1) and 58(3) of the Marine and Coastal Access Act 2009). The decision-making departments and bodies identified are in the following table: 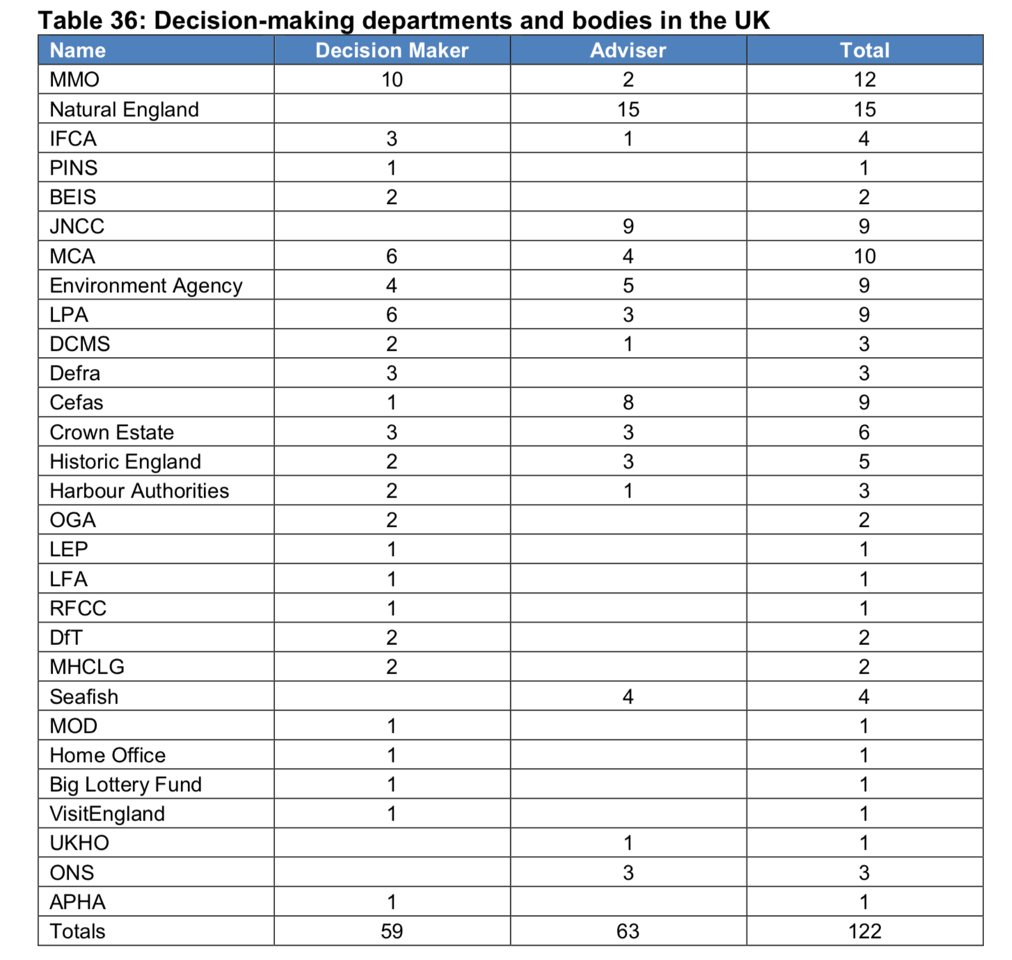 The study also found that 92% of participants were aware of existing adopted or draft marine plans and 85% of the plan policies for the East and South. The research also identified where marine plan use may be relevant to advisory bodies and functions. Decisions identified ranged from marine licensing application approval to developing and delivering catchment flood management plans. However, most decisions fell within seven generic decision-making processes, and accordingly seven generic process maps were developed e.g. consenting and permitting.

Process maps highlighted the parties involved, actions that the relevant bodies take, which stages provide evidence of marine plan compliance (where applicable) which can be seen in the following diagrams: 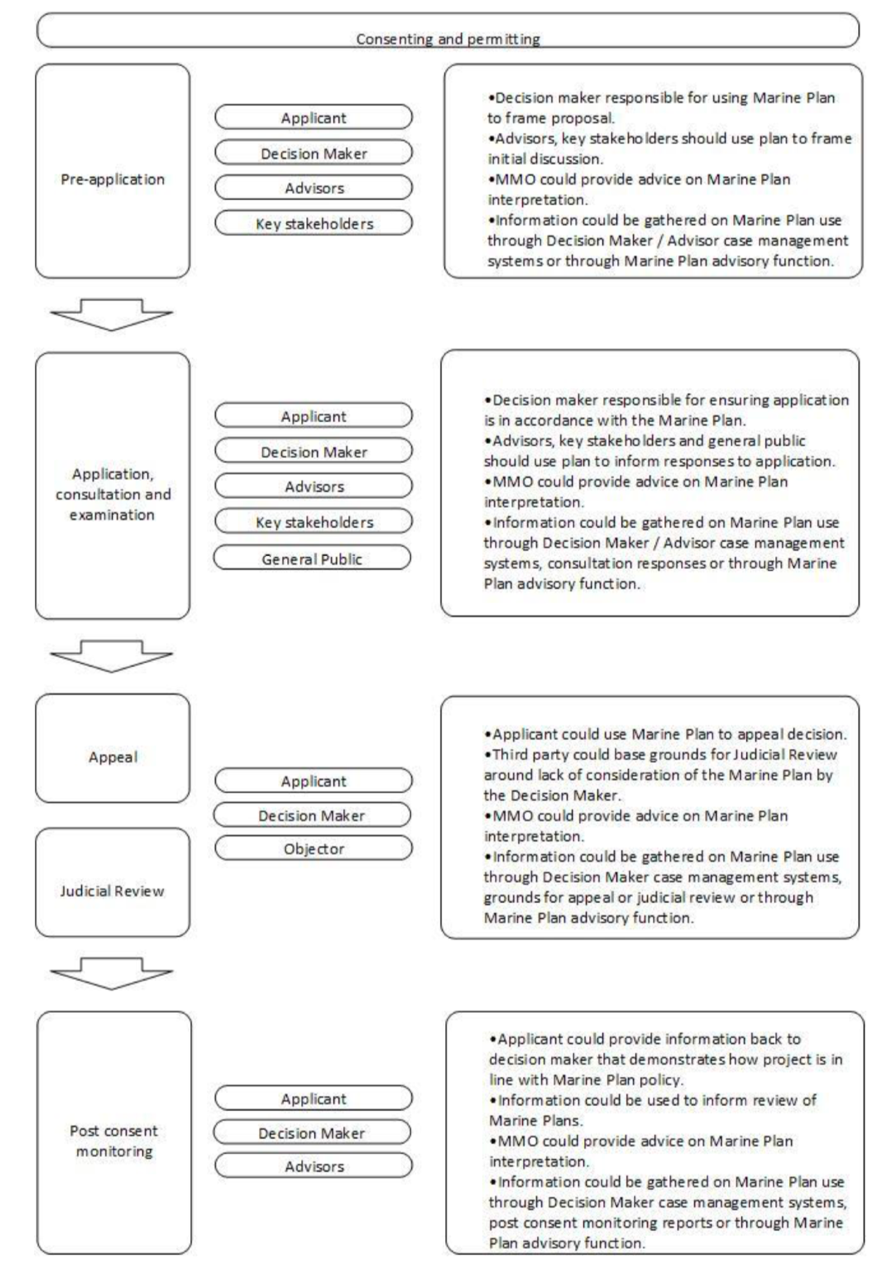 2. Funding decisions - this covers decision making around applications for funding such as European Maritime and Fisheries Fund, Coastal Communities and Visit England funding 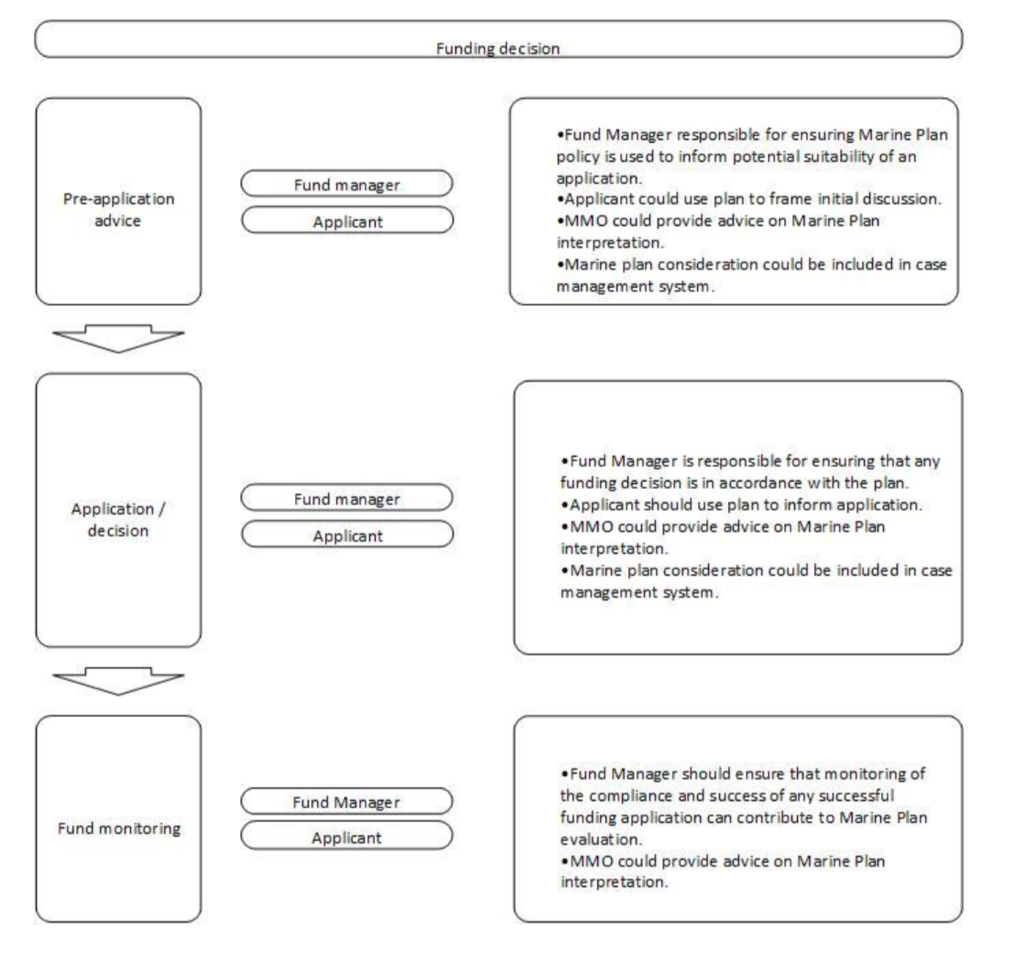 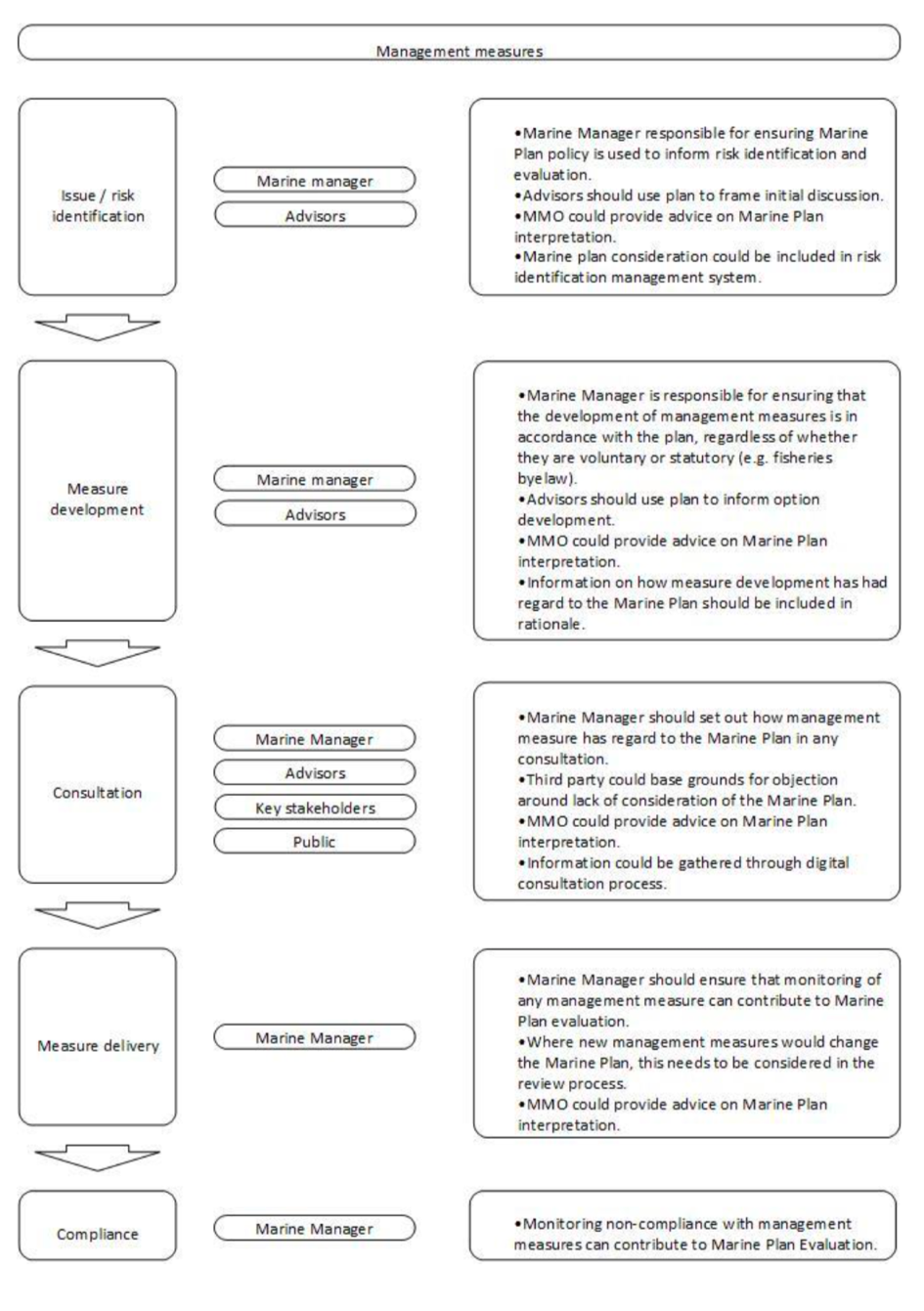 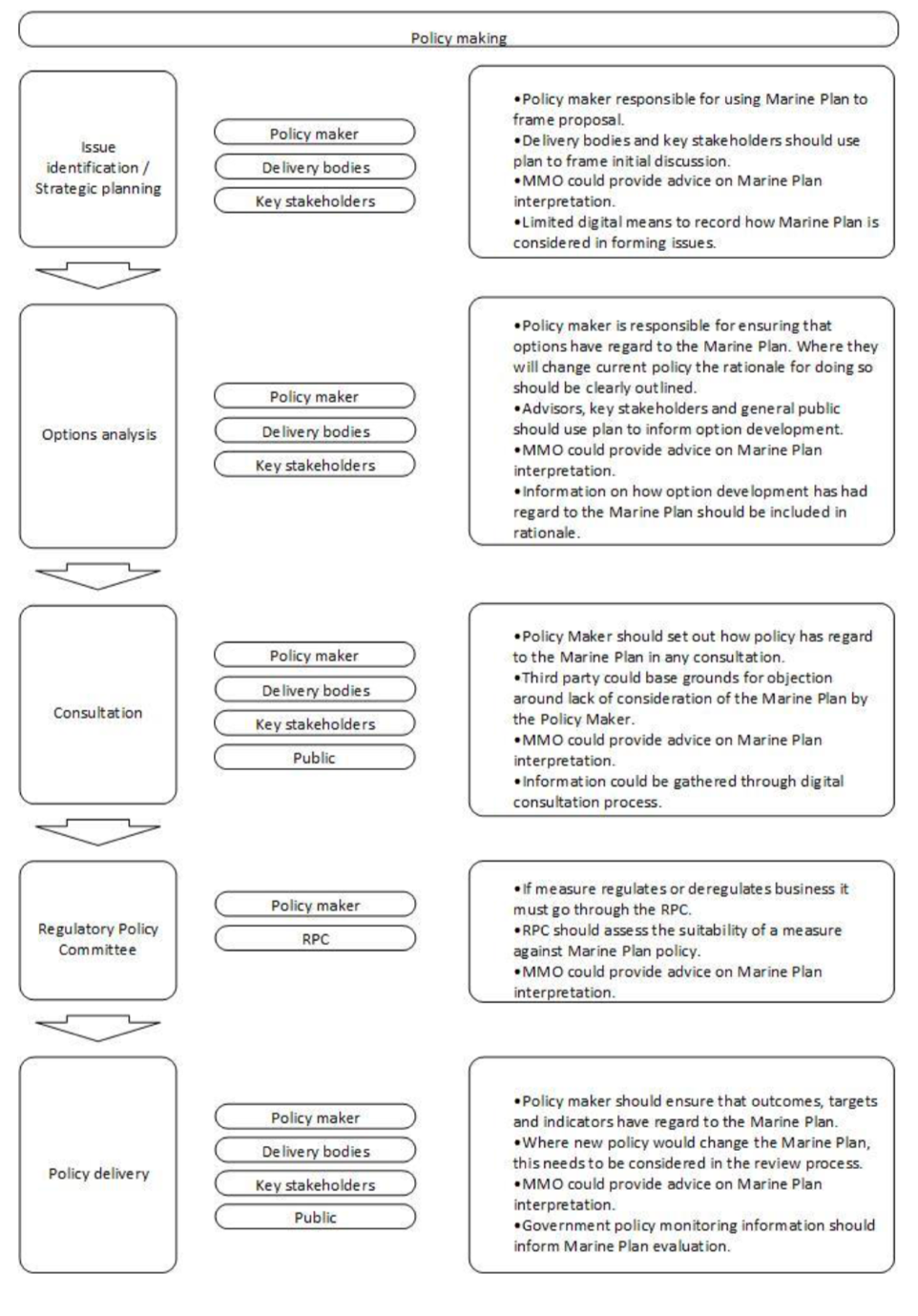 5. Nature Conservation Designation - this covers the process of designating sites for nature conservation purposes such as Natura 2000 sites or Marine Conservation Zones 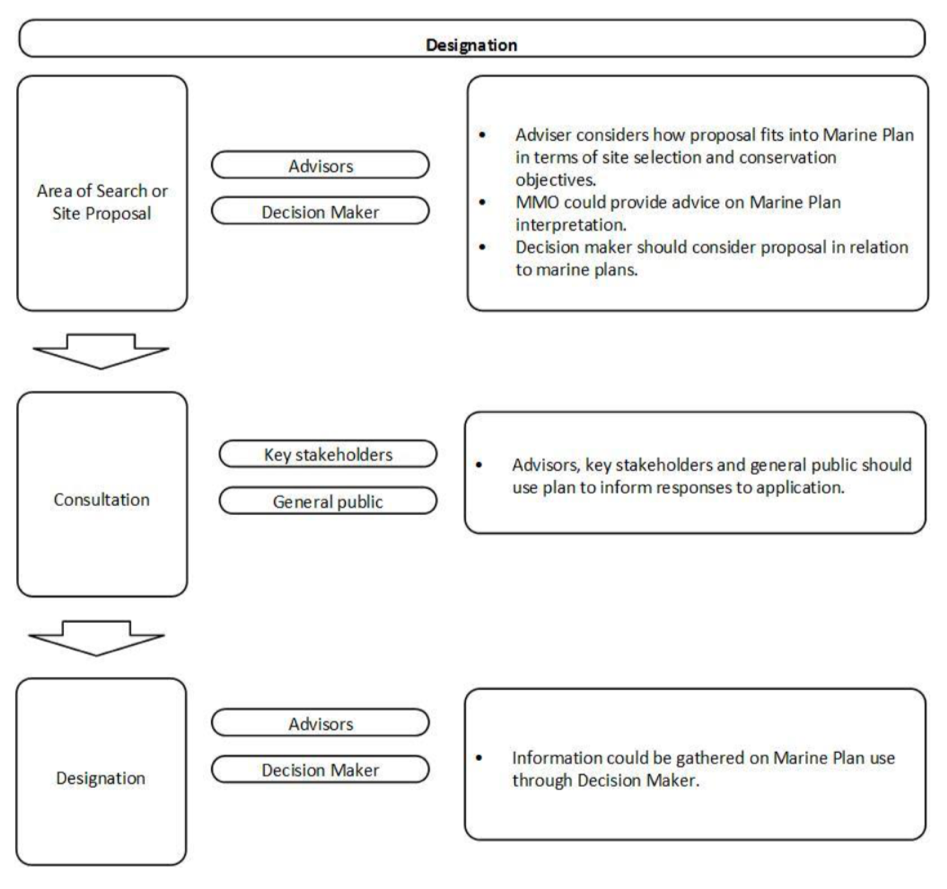 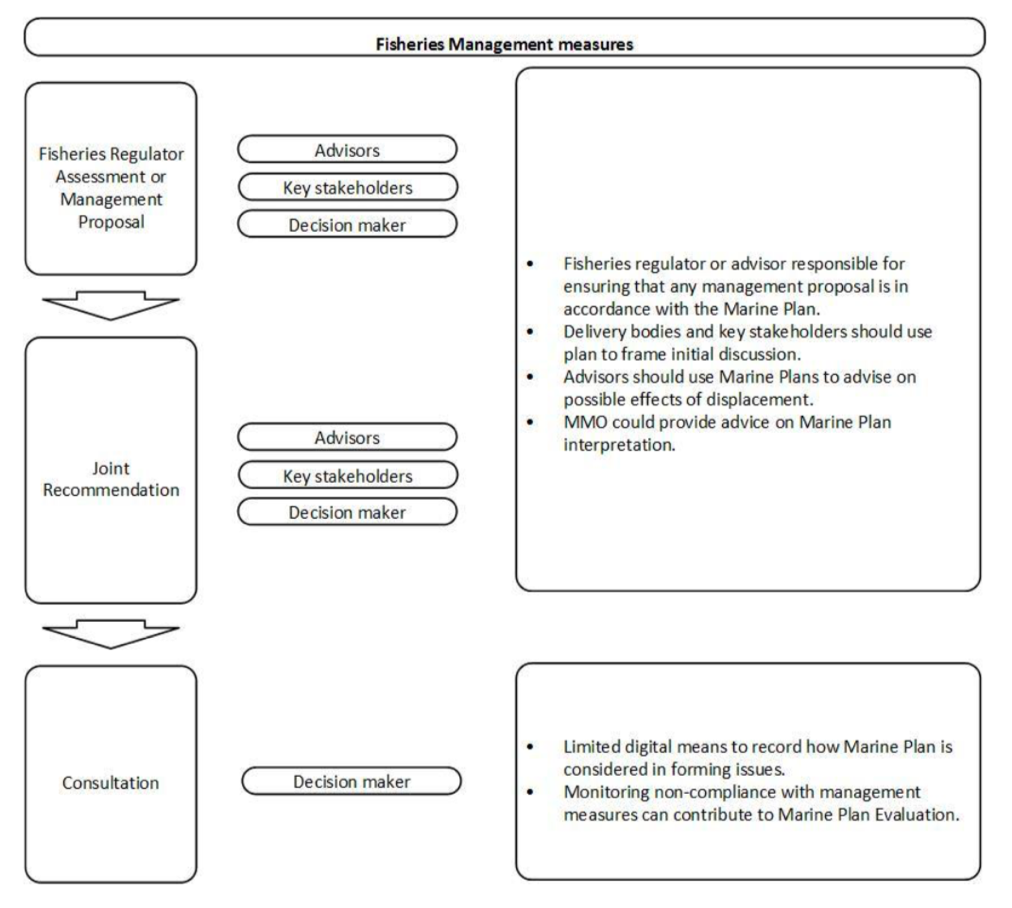 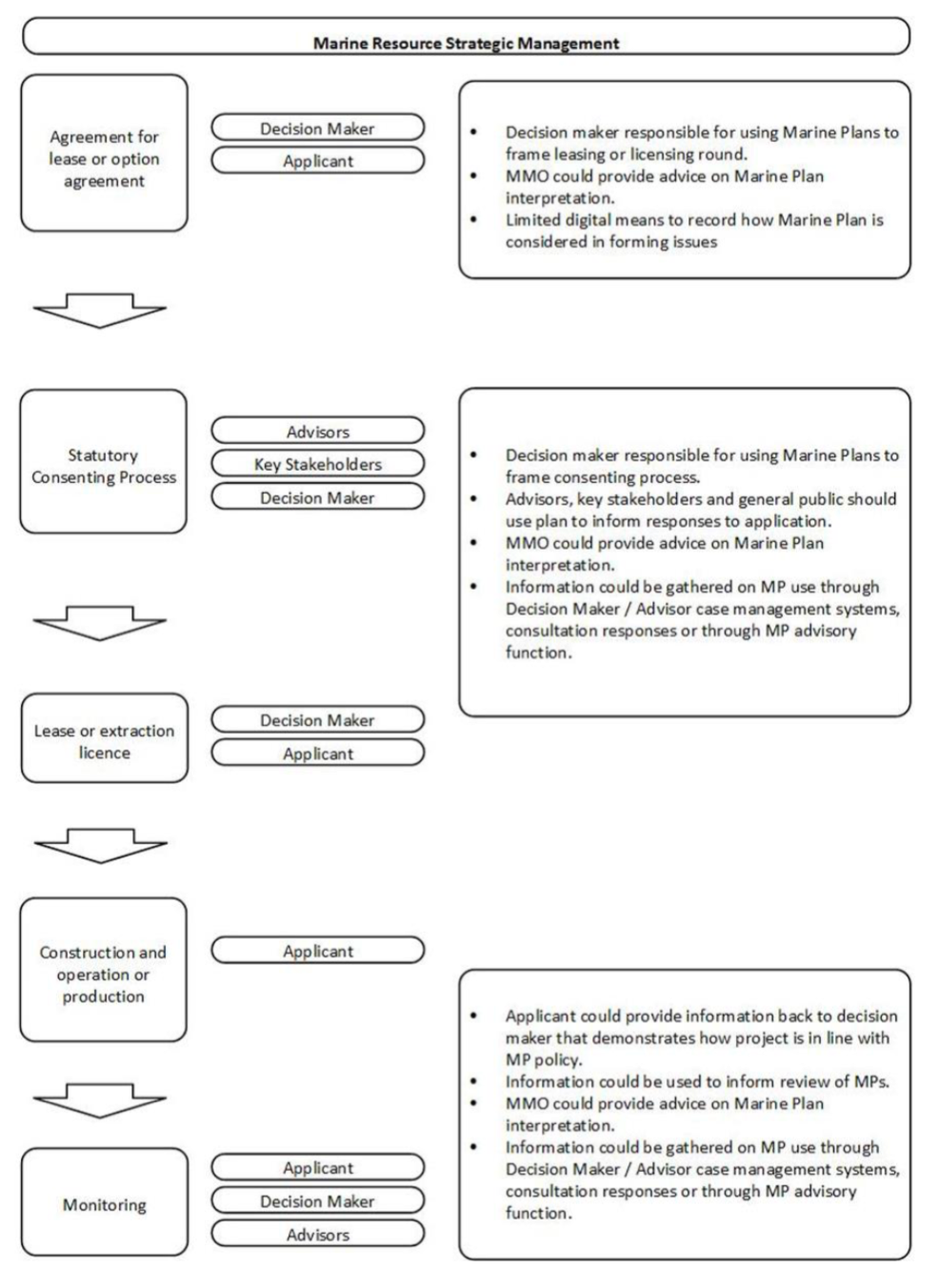 As a result of the findings a proposed approach to engaging parties in joint-working, in relation to marine plan development and implementation, was developed. Proposals included closer engagement with Government departments and advisors, clearer communication of consenting and permitting processes in relation to marine plans, and engaging with decision-making bodies that did not participate in this study or where there has been limited communication to date. The recommendations and overall report content will aid the Marine Management Organisation in supporting implementation of marine plans in England.

While the study was conducted specifically for marine plans in England, a similar analysis using the study’s methodology could be carried out for evaluation of other maritime spatial plans post-adoption, in order to determine their scope of implementation.