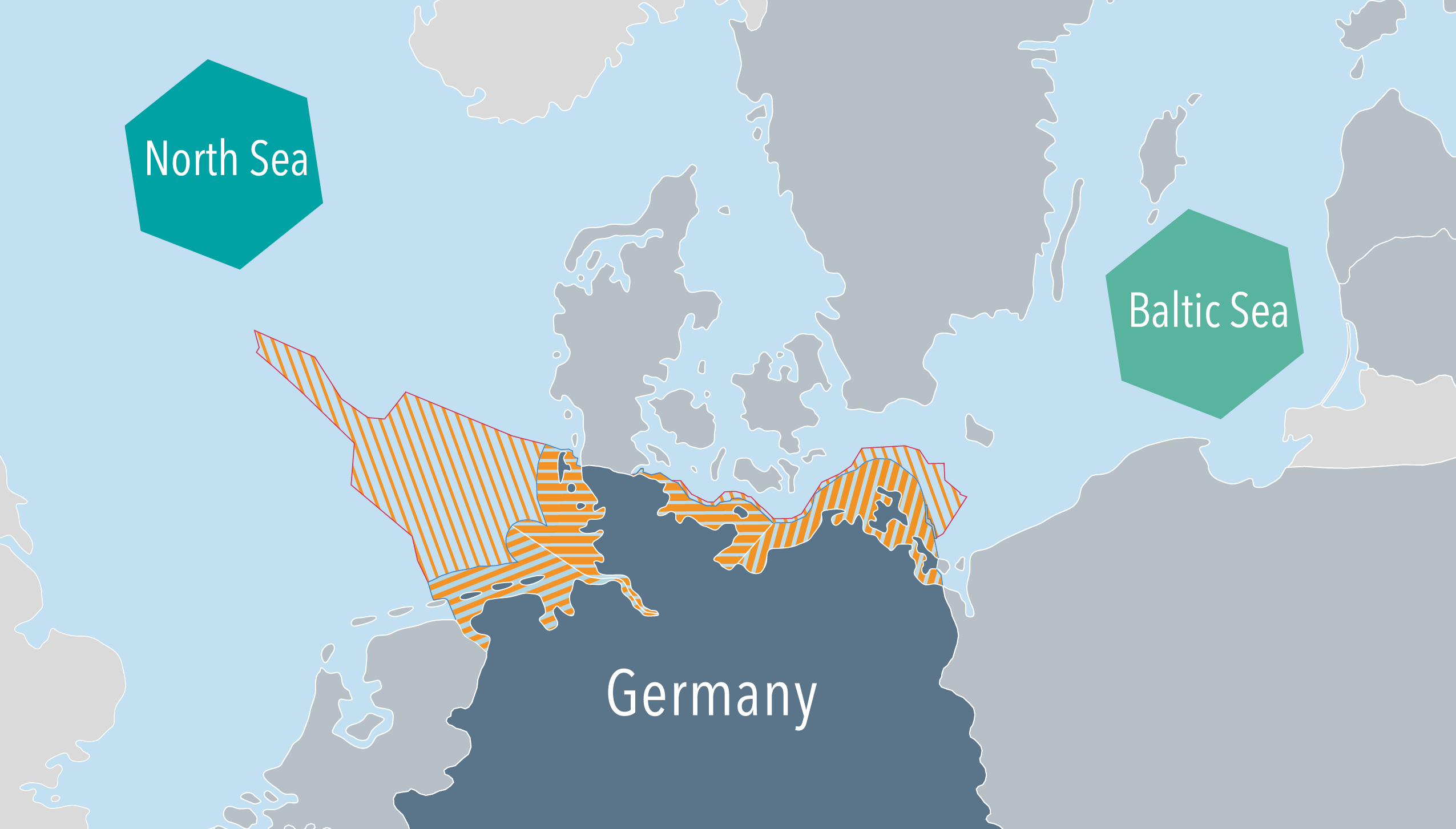 Maritime spatial plans exist for the German North Sea and Baltic Sea EEZs (2) and for the territorial sea areas under jurisdiction of the three coastal federal states (Lower Saxony, Schleswig-Holstein, and Mecklenburg-Vorpommern) (3).

The process of revising the MSP has been completed after two rounds of national and international consultations. Changes were made based on the feedback received and the revised MSP for the German EEZ in the North Sea and Baltic Sea entered into force on 1 September 2021.

The State Development Plan for Schleswig-Holstein regulates conclusively the spatial objectives and principles for terrestrial as well as marine areas. The guiding principle is sustainable spatial development, which brings the social and economic demands regarding space in line with its ecological functions and leads to a permanent, large-scale balanced order. The different uses in the coastal zone should be balanced and adjusted to each other. Integrated coastal zone management should play an important role in this. The plan came into effect in 2010 and was last amended on 5 May 2019.

The plan takes coastal and flood defence into account.

The Spatial Development Programme Mecklenburg-Vorpommern aims to implement the principles of sustainable spatial development which may bring social and economic requirements to be met by the territory into harmony with its ecological functions, and which leads to a long-term, large-scale and balanced spatial development. The plan was extended to the 12-nm zone between 2003-2005 and adopted in 2005. Between 2013-2015 it was revised and adopted. Accordingly, it became a legally binding act in 2016.

According to the LPIG M-V, an evaluation of the planning should be carried out after 5 years. A monitoring system is under preparation.

The Spatial Planning Programme of Lower Saxony includes provisions concerning wind power production and nature conservation, offshore electricity transmission, and shipping. Objectives that apply to both the territorial sea and coastal zones include sustainable development, consideration of stakeholder perspectives from multiple groups and geographies, and reversible measures. The programme of Lower Saxony was revised and amended in 2008 and 2012. There are currently three drafts in existence due to an amendment process for the years 2014, 2015 and 2016. The plan takes water management as well as coastal and flood defence into account.

German Federal Ministry of the Interior, Building and Community

Internal Waters and the Territorial Sea:

The amendment of the ROG in 2004 extended the scope of spatial planning according to the guidelines of the UN Convention on the Law of the Sea to include EEZ and allocated planning powers to the Federal Government for the EEZ in the North and Baltic Seas (beyond the 12-nautical mile zone (territorial waters) outward to up to 200 nautical miles). This was the first time the Federal Government was assigned a concrete task in overall spatial planning.