Story 5: Zoning as a means of conflict prevention in the Zadar County Spatial Plan

The Spatial Plan of Zadar County is an integrated land and sea use plan that uses spatial policy to strategically guide aquaculture development. The plan’s zoning scheme either prioritises aquaculture over other maritime uses, or defines it as supplementary, in other words secondary to other uses including tourism. The purpose of the zoning scheme is to ensure licensing decisions fit with long-term sustainable and optimal use of existing resources.

The zoning scheme was developed in response to the findings of a Study on the use and protection of the sea and seabed in Zadar County (see story 1). In the study, tourism was described as strongly seasonal and dependent on world market changes; as such, the authors concluded it should not impede the development of all other sectors. Aquaculture provided employment throughout the year, and ultimately enriched provisions that could be made by tourism. The study found that negative impacts of aquaculture on tourism were possible, but that higher overall benefits could be derived from multi-sector development. It also concluded that additional planning and spatial management would be necessary to allow such development to take place.

Permits for individual farms within the defined zones can be obtained through compliance with special regulations including food safety, water quality standards, control of animal feed origin, regulations for environmental protection, etc. 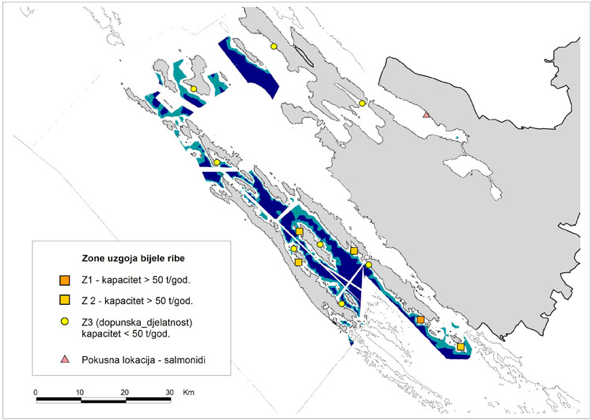 The zoning plan also establishes the obligation to relocate existing aquaculture farms which are not in accordance with the plan within 18 months of its date of adoption.

Aquaculture is expected to grow in Zadar in the coming years, which implies that new farms will likely be established and existing farms expand. The spatial plan stipulates that such expansion should be monitored, and that the most appropriate response to emerging problems should be given in accordance with integrated coastal zone management practice. For example, if it is shown that a particular location is not suitable for further growth, it is possible to relocate a farm within the permitted zones.