One of the busiest and shipping intensive areas in the world is the English Channel, which makes the area a major concern for choke points especially for OWF development. A case example is the Dunkirk OWF area proposed along the Flanders coast of France, which stretches out to the Belgian border (Figure 6). Due to the existence of Dover Strait/Pas-de-Calais traffic separation scheme (TSS) (the busiest in the world), and consideration of safety distances, the Maritime Prefecture (the competent authority for MSP and offshore wind in France) proposed an OWF zone (the 180-square-kilometer area) located only 5 km from the coast, instead of the required 10 km. The proposal also included  a 5 nm exclusion zone to the TSS but only 2.5 nm to the Dunkirk port access lanes (compared to the 3.5 nm recommended by the UK Offshore Renewable Energy Installations safety of navigation guidance requirements)

Although Dunkirk is the most profitable offshore wind farming area in the France, the demarcation of the proposed zone raised concerns from various stakeholders such as local residents, shippers and fishers in both France and Belgium who stated that the area is too close to the coast and encroaches on the access routes to the port. For example, the Maritime and Commercial Union stated that “the proposed surface of 180 km2 subject to consultation presented a series of "incompatibilities” with the coastal access and shipping lanes to the two ports of Dunkirk”. 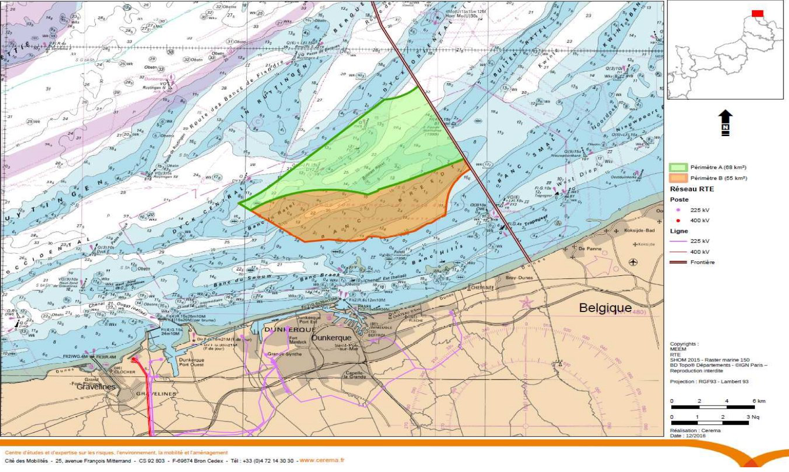 After the first regional consultation, the Maritime and Commercial Union worked on an alternative solution, and proposed a zone of 70 km2 usable area rather than the 180 km2 delimited by the Maritime Prefecture.

After these consultations two smaller areas (area A:68 km2 and area B: 55 km2) were selected for tender (both 10 and 6 kilometres from the coast respectively). Further and early consultation and studies will be needed especially for area B during the construction and operation stages of the offshore wind farm due to its proximity to the port entrance and shipping lanes. Such consultation and studies in Dunkirk must explore various local mitigation measures with the responsible agency such as the Maritime Prefecture and local stakeholders.

Back to page 'Transport and Offshore wind'