In the UK and Overseas Territories, the Ministry of Defence is responsible for providing military defence and security for the people. Defence makes a significant socio-economic contribution and, in some coastal locations, the Ministry of Defence is the major employer in the region. Any area of United Kingdom waters can be used for military defence activities, although the nature of these activities differs in different locations.

In 2011, the UK adopted the Marine Policy Statement which is the framework for preparing Marine Plans and taking decisions affecting the marine environment. It firstly recognises that ‘the construction and operation of offshore marine infrastructure, installations and activities, as well as policies on conservation designations and the health of the wider environment may impact on defence interests in certain areas. In a clear explanation of national priority, it subsequently states that ‘Marine activities should not prejudice the interests of defence and national security and the Ministry of Defence should be consulted accordingly (Marine Policy Statement 3.2.2 and 3.2.9). The consultation requirement is an important one which has subsequently been included in the actual MSP plan.

The East inshore and offshore marine plan areas are specifically significant for practice of air to air combat manoeuvres, bombing, and submarine exercises. There are also a number of air bases located along the coast with associated air traffic radars. As a result, there are specific issues for consideration, which the plan states as Danger and Exercise Areas, other training facilities primarily within the East Inshore Marine Plan Area, and potential interference from wind turbines on defence radars and some training facilities within the East Offshore Marine Plan Area. A supporting map is provided that indicates the location of the relevant military areas.

The actual plan policy states that “Proposals in or affecting Ministry of Defence Danger and Exercise Areas should not be authorised without agreement from the Ministry of Defence.” This policy supports the need for defence activities to take place within the East marine plan areas for the purpose of national security. Priorities are made very clear by stating that if the Ministry of Defence objects to a proposal then the development or activity will not be authorised. The aim of this policy is to avoid conflict between existing defence activities directly using the marine environment, and potential new licensable marine activities within the East marine plan areas. The policy is implemented at the project level, i.e. by issuing licenses. This policy has been included to ensure that defence interests are not impeded given their role in the delivery of national security. 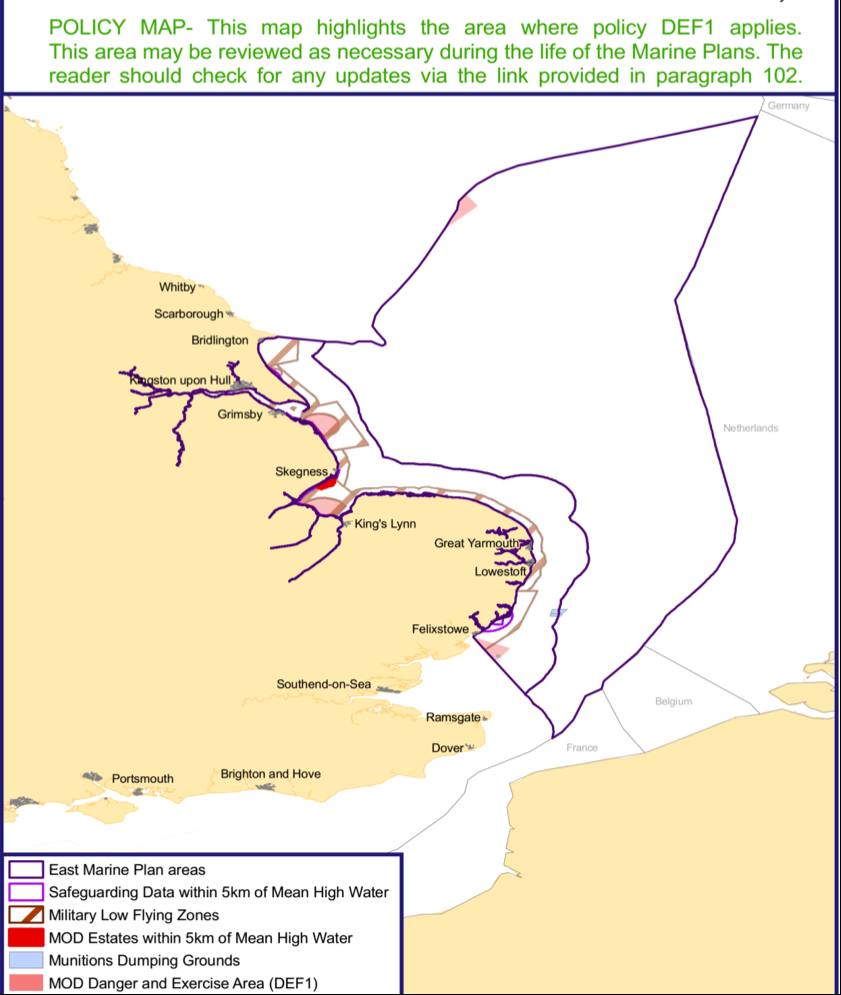 Back to page 'Military and other uses'