Story 2: How conflicts between recreation and oyster farming were resolved by means of risk control measures in Whitstable, England

Whitstable on the north-east Kent coast (England) is a popular seaside resort with a high density of holiday makers and recreational water space users. It is also a world-famous area for traditional oyster farming. Commonly adopted methods of oyster farming in the area have involved trestles placed intertidally (to provide periodic wetting and drying) that are used to hold mesh bags in which the oysters are grown. The Whitstable Oyster Fishery Company (WOFC) owns the oyster farm under an historic Royal Charter allowing them to conduct shellfish cultivation on the foreshore at Whitstable. Shellfish cultivation is one of the activities exempted from marine licensing and statutory consultation with relevant stakeholders. This allows the owner or user to self-declare that the proposed activity does not cause an obstruction or risk to navigation. However, the exemption only applies if “the deposit does not cause or is likely to cause obstruction or risk to navigation”. Where this qualifying criterion is not met, a licence is required.

In the past couple of years members of the public in Whitstable had become concerned that oyster farm activities posed risks to recreational users; they also questioned the legality of the oyster farm activities. Their main concern was that the number of trestles and metal racks – which are submerged during high tide - posed a hazard to water space users navigating nearby as they “could trap an unsuspecting capsized sailor, windsurfer or kayaker by their clothing under the water.”

In July 2017 the Maritime and Coastguard Agency commissioned independent experts to produce a report on the navigational risks arising from oyster farm activity in the Whitstable area. The report recommended mitigation measures to reduce the risk, acknowledging that some of these measures had already been adopted. It also concluded that the farm’s operations were acceptable as a low risk to recreational activities and marine navigation. The following solutions and recommendations were proposed:

Solution 1: Trestle Design Modification. Trestles were adapted by removing vertical steel rods that could have endangered human life and posed a risk to vessels. 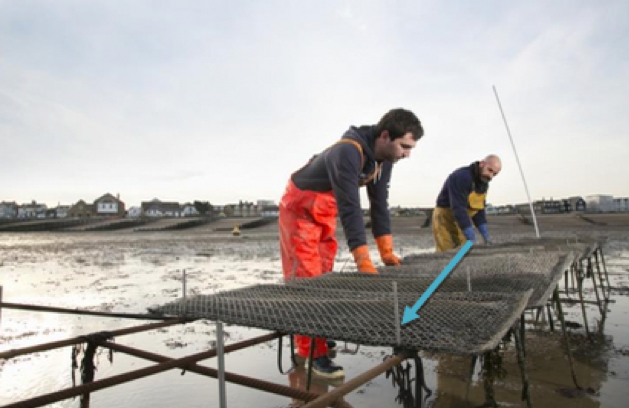 Solution 2: Inform Local Users. Information signs were installed on the foreshore at Whitstable on all groynes and public notice boards. A periodic (annual) stakeholder meeting was recommended to ensure a regular review of the risk assessment, and to enable stakeholders to discuss the placement of the trestles, their marking and other risk control measures as identified. 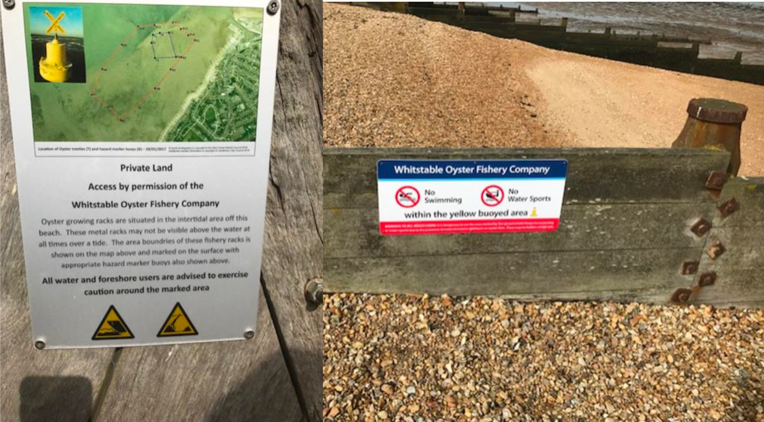 Solution 3: Increasing the height of the withy navigation markers. The trestle array is currently well marked by withy navigation markers (vertical sticks) which are placed at the corner of each trestle block. However, the withies are submerged at high tide and therefore not always visible. The report recommended that the WOFC increase the height of these withies such that they are visible at all states of tide.

Solution 4: Buoyage layout to reflect trestle location in a broadly repeating pattern. It was recommended that buoyage layout is modified to clearly mark the relative location of the trestles and allow recreational users and navigation authorities enough space to carry out search and rescue.

The MMO provided a further update on its investigation in February 2018 clarifying that after careful consideration it had concluded there was insufficient evidence to prove a criminal offence in relation to its remit under the Marine and Coastal Access Act 2009. The MMO considered the oyster farm’s activities to meet the requirements of the exemption relating to shellfish propagation and cultivation under the Marine Licensing (Exempted Activities) Order 2011 as amended (Article 13).

In March 2018 the MMO received further contact from members of the public, alleging that additional oyster trestles had been placed on the beach. This, they felt, increased the risk to swimmers, sailors and navigators. The official estimate of the number of trestles on Whitstable beach in 2010 was 250; this had risen to approximately 2,400 in 2016. Additional concerns were related to the propagation of non-native oysters.

Canterbury City Council conducted an independent investigation and eventually decided that a planning permission and a certificate of lawful existing use or development (CLEUD) was needed after the 10-fold increase in the number of trestles. The firms’ CLEUD application was refused by the council who ruled that 300 WOFC trestles on the beach are unlawful. Currently, the firm has been ordered to remove all 300 trestles, bags and buoys from the land within two calendar months.