In 2014, four offshore wind farms were granted consent in the Forth and Tay region – Neart na Gaoithe (450MW), Inch Cape (784MW), Seagreen Alpha and Bravo (1,050MW). The decision by Scottish Ministers to grant the consents was legally challenged by RSPB Scotland, an environmental NGO, based on concerns regarding the cumulative risk to seabird populations from collision and displacement. Bird species of concern included kittiwake, gannets and puffins associated with Special Protection Areas (SPAs) in the region. The case was heard in Court of Session, Edinburgh in 2015, and the judge agreed with the case put forward by RSPB, concluding that the requirements of the environmental assessment processes were not met, including a failure to consult properly and misuse of appropriate assessment. His ruling noted that while there is dominant public interest in sustainable growth and renewable energy, wind farms must be consented “on the basis of defensible environmental decision-making”, which was deemed not to be the case here. He also concluded that Scottish Ministers were in breach of their EU law obligations by refusing or delaying to classify the Outer Firth of Forth and Tay Bay Complex as a marine special protection area (SPA), and which was therefore not properly considered in the consenting decision. However, the 2015 ruling was subsequently overturned on appeal by the Scottish Ministers and in 2016, the consents were reinstated. The Court ruled that there had been no procedural defect in the Scottish Ministers’ appropriate assessment process, nor was there any breach of relevant regulations. It also found that the earlier judge had acted outside of the capacity of the Court of Review in reaching his decision. A further attempt by RSPB to appeal was refused in 2017. Since the consents were reinstated, offshore wind technology has improved and the developers are progressing new applications to replace their existing consents, which would enable deployment of larger yet fewer offshore turbines. These new application processes are underway and while the number of turbines will be reduced, there are still concerns regarding the risk to seabirds, particularly considering the declining trends of some species. RSPB Scotland has submitted an objection to the first of these ‘new’ applications in 2018. 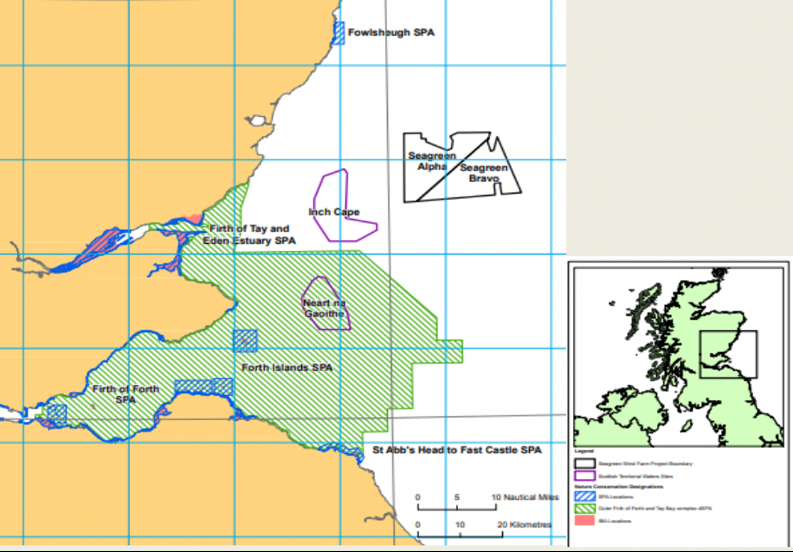 This case was (and continues to be) highly complex, with many elements interacting. They relate to at what scale conflicts should be addressed and our ability to predict risk (of negative impact), at different scales. At the policy level, there is a supporting policy environment for development of renewable energy, which in Scotland includes particular emphasis on expansion of offshore wind. This can conflict with environmental policy and conservation objectives in relation to birds. Since national policy is not fully integrated, at present these policy conflicts only come to the fore when specific proposals (based on detailed studies for EIA) are being considered. The higher resolution understanding (of conflicts) which is developed at site level can thus be contrary to that at the strategic level. This can lead to problems when projects are advanced based on the ‘certainty’ provided by government through policy and sectoral planning. At the project level, it is very challenging to predict the likely impacts arising from constructed wind farms and to understand the behaviour of seabird populations over time. Reaching judgements on where impacts are acceptable or not becomes highly subjective and debatable. While there is a tradition of aiming for ‘science-based’ decision-making, there is a limit to how science can inform in this regard. Greater emphasis should therefore be placed on the process by which the judgement is made. Uncertainty should reduce over time as monitoring of effects is undertaken at constructed sites, but such intensive monitoring to yield conclusive results is expensive and will take time.

Back to page 'Offshore wind and conservation'