Story 1: Poland (Military and other uses)

Story 1: How Poland analysed defence and security needs in its “Study of Conditions of Spatial Development of Polish Sea areas"

Poland is currently developing its first maritime spatial plan which is expected to be completed in 2019. A study (“Study of Conditions”) was carried out preceding the planning process with the intention of gathering all the necessary planning information. In this study, national defence, security and safety were given a prominent place. The analysis included:

With respect to the first, three key policy documents were analysed: (i) the National Spatial Development Concept 2030 (NSDC), which is Poland’s national spatial development strategy, (ii) the Act of 21 March 1991 on Sea Areas of the Republic of Poland and the Maritime Administration (JoL 2013, pos. 934 as amended) – which is concerned with spatial planning of Polish sea areas, and (iii) the Strategy of National Safety of Poland. The general conclusion was that national defence and security are overarching goals in Polish sea areas, which means they will impact on all other sea uses. At the same time, uses like shipping and port development may have equally strong if not stronger policy support and priority in some specific cases.

The policy analysis was followed by a stocktake of current activities. This covered (i) the locations of navy training areas, anchorages and fairways – most of which are temporarily or permanently closed to fishery and shipping (see Figure 1) and (ii) routes of military flights at low height. “Low height” in this case is defined as a height higher than the height of hedgehopping, but not higher than 900m (see Figure 4). 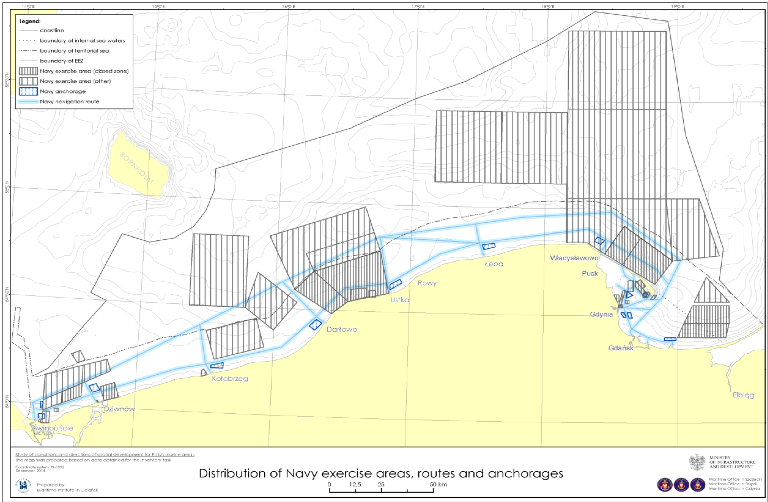 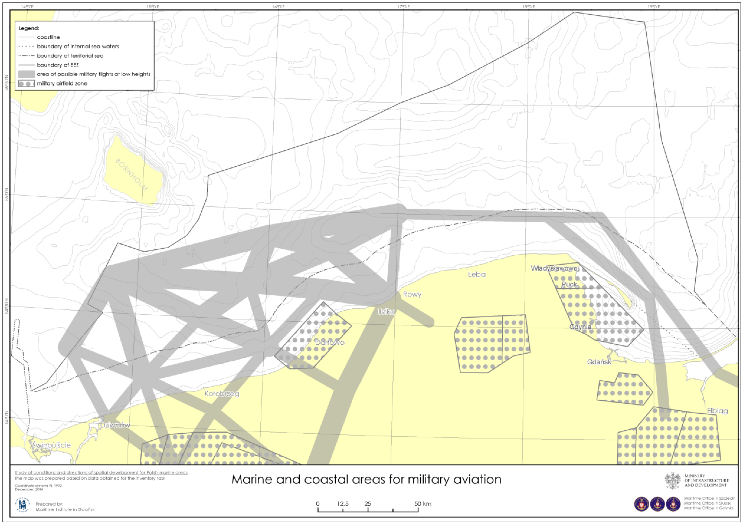 It became apparent that most military exercise areas are located in internal waters and the territorial sea. Some, but not all are permanently closed to shipping and fishery. Routes for military flights over sea at low height are represented as corridors with a width of 5 or 10 km and a height from sea level of up to 2,700 m. This is an interesting fact as it means the maritime plan also considers air space – representing a fourth dimension in addition to the sea bed, the water column and the water surface.

The stocktaking report detected some planned investments, e.g. mooring places for naval vessels in Kołobrzeg or the modernization of infrastructure in the naval harbour of Gdynia.

The next part of the exercise was the assessment of conflicts with other sectors. Conflicts were assessed by stakeholders during a round of consultation on the report, but also by the planning experts elaborating the study. For this purpose, national defence and security were divided into three subcategories: exercise grounds, naval fairways and anchorage sites, and military aviation.

Expert opinions on conflicts were complex and covered a wide range of uses. They were subdivided into strong and weak conflicts as follows:

Strong or weak conflicts were identified between naval fairways, anchorage sites and aggregate exploration depending on the situation. Conflicts were also identified related to the potential impact of military exercise areas on fish, birds, seals and harbour porpoises.

The Study was then put out to public consultation. This revealed a slightly different set of concerns mostly resulting from direct experience. Stakeholders perceived strong conflicts between military exercise areas and fishery as a result of military zones being closed to fishery – a conflict they considered very difficult if not impossible to resolve. Stakeholders also saw weaker conflicts – i.e. conflicts with potential solutions - between military exercise areas, naval fairways, anchorage sites and underwater cultural heritage.

The study concludes with the following recommendations for the forthcoming MSP process:

Back to page 'Military and other uses'