Story 1: Information to reduce ship strikes in the Pelagos Sanctuary for Marine Mammals

The Mediterranean Sea is one of the most navigated regions in the world with almost 222.000 vessels navigating through it yearly. The Mediterranean region is also a biodiversity hotspot and hosts diverse marine mammal species which are jeopardised by the negative pressures exerted by the shipping sector In particular, the Ligurian Sea in the north-west of the Mediterranean Sea hosts significant populations of fin whales and other cetaceans which were accidentally caught in the drift net fishery during the 1980s. Additionally, marine traffic such as high-speed passenger vessels, naval ships and expanding commercial whale watching were all increasing in the late 1980s, which posed increasing risks of collision and disturbance to marine mammals in the area.

As a result of the increasing anthropogenic risks for cetaceans and also due to the growing public awareness among civil society, the Pelagos Sanctuary - a transboundary Specially Protected Area of Mediterranean Importance (SPAMI) located in the North-western part of the Mediterranean Sea was proposed by an Italian NGO called the Tethys Research Institute in 1990 (Figure 7). It was established by France, Italy, and the Principality of Monaco in 1999 with the aim to protect marine mammals from anthropogenic activities occurring in the area. It is the largest MPA in the Mediterranean, accounting for 3.5% of its total surface. The sanctuary was added to the SPAMI list in 2001 and is consistent with the objectives of the EU Habitat Directive, which considers cetaceans and animals of community interest which need to be protected. 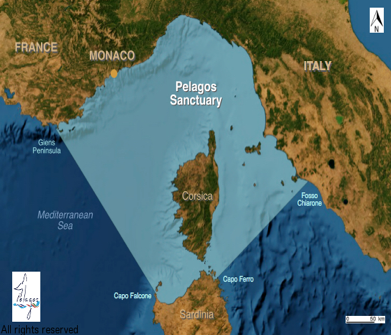 The Pelagos Sanctuary area contains important ports such as Genoa, Marseille, and Savona, which are visited daily by hundreds of vessels, from ferries to cargo ships and tankers (see Figure 8-10). Consequently, vessels within the sanctuary generate various forms of pollution, including noise, oil spills, ship strikes and air pollution. Many studies highlight how noise and ship strike are amongst the worst threats for marine mammals in the area. Among all ship types, passenger vessels appear to travel fastest, followed by cargo and tanker vessels; the latter tend to reduce speed in proximity of ports and coastal areas compared to passengers’ ferries. 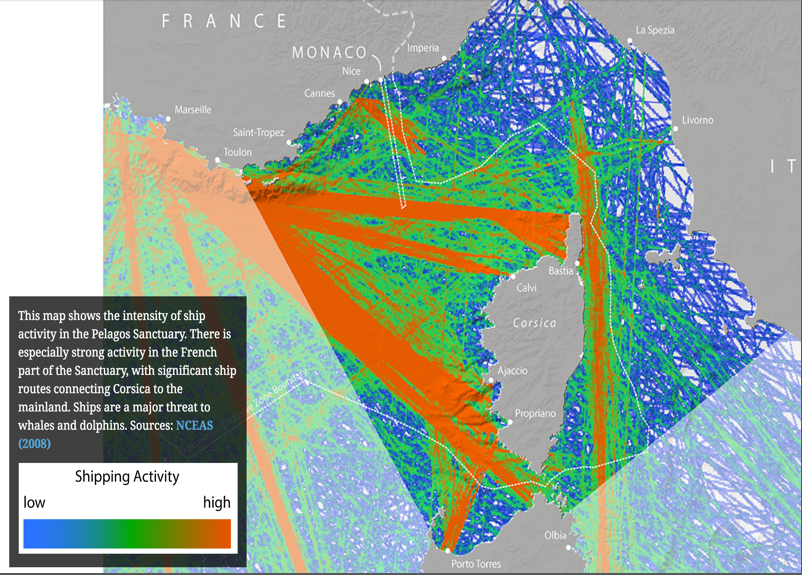 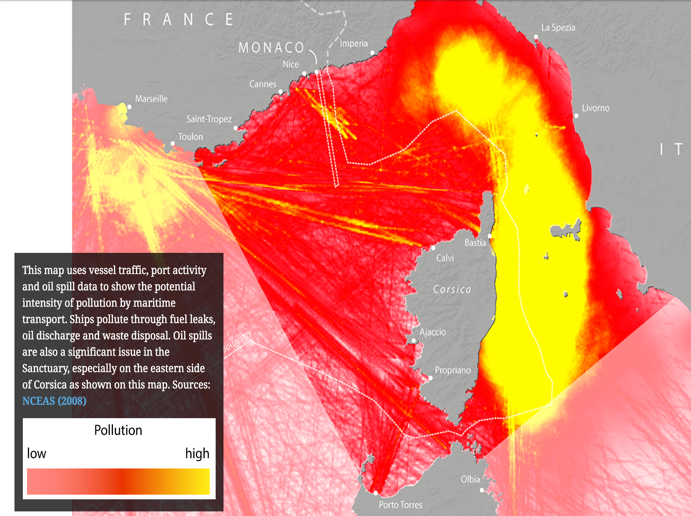 To limit possible negative impacts on cetaceans within the sanctuary, specific restrictions have been implemented such as the prohibition to intentionally disturb marine mammals, the regulation of research activities and whale watching, the prohibition of pelagic driftnets, and the limitation of speedboat racing activities within the Sanctuary, which are prohibited in the Italian waters and strictly limited in the Basque and French waters. Additionally, a code of good conduct is available on the Pelagos webpage, which provides guidelines for whale watching activities in order to reduce disturbances to the minimum.

Strategies to protect marine mammals from strikes are not limited to command and control instruments but they are also based on technology. For instance, the REPCET project created a software system (REPCET tool) which has the aim to reduce the risk of collision between cetaceans and vessels within the Pelagos sanctuary. It is a software that with the use of a computer network, it allows commercial vessels in real-time regarding the position of whales. Information on the location of whales are sent to the server by whale watchers and watch keeping personnel on board of vessels. The location of whales is displayed cartographically on a dedicated screen on board of the vessels in order to allow the captain to reduce speed and change. REPCET is also available as a mobile app and professionals at sea can use it to communicate to the server the position of sighted cetaceans, which increase the efficiency of the system. 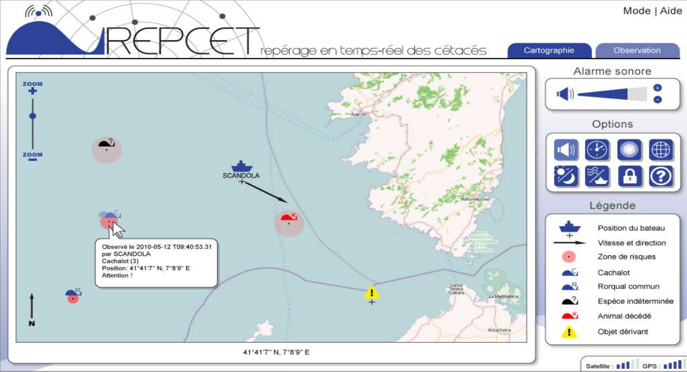 Although the Pelagos sanctuary also raises public awareness regarding marine mammals and introduced the mentioned measures, strikes between marine mammals and vessels still occur and noise pollution is still present in the sanctuary. Fin whales and sperm whales are particularly affected by vessels strikes and it has been estimated that 6% of all the marine mammals sighted within the Pelagos Sanctuary showed traces of collisions. Because of the numerous important ports within the sanctuary and industrialised coasts, it is not possible to prohibit navigation to ships and boats. However, the implementation of traffic impact mitigation measures such as speed limits in certain areas, new routes far from marine mammals’ populations, and a better implementation of software for the communication of whales’ sight could reduce some of the negative impacts that the shipping sector has on marine animals and ecosystems within the Pelagos Sanctuary.

Go back to page 'Transport and Conservation'