Story 1: How a conflict between aquaculture and tourism was tackled with the help of multi-criteria analysis

Aquaculture and tourism are both important industries in Zadar County in Croatia. Fish farming has a long history in the county, but shellfish aquaculture is still a comparatively recent activity. Coastal tourism continues to be the major blue sector in term of employment in Croatia, and has been identified as a strategic growth sector by the national authorities in the 2020 strategy for tourism development.

In Zadar County, the relationship between aquaculture and tourism had become problematic. Negative attitudes to aquaculture had grown among local communities and tourists on account of several incidents including:

Numerous citizens wrote to the authorities to complain; newspapers also picked up the issue. After a few months of intermittent odour, the Environmental Inspectorate ordered the company to deal with the irregularities in waste storage that had been established as a cause of the problem. But local people had other concerns regarding the impact of aquaculture installations, mostly related to the landscape and water quality. Local communities and tourists were represented in their concerns by local NGOs; local media also had an important role.

Because of the strong growth of aquaculture and unclear legislation, Zadar County decided to develop a scientific basis for the definition of aquaculture areas within the County’s Spatial Plan. In 2003 a “Study on the use and protection of the sea and offshore waters in Zadar County” was prepared. The aim of the study was to initiate the process of integrated coastal zone management in the County, while creating a clearly defined framework zoning the coastal area.

Zadar County then began to develop a detailed zoning plan for marine space for different types of aquaculture. A “Study on the use and protection of the sea and seabed in Zadar County” was carried out in order to determine suitable zones for aquaculture. The method of choice was multi-criteria analysis, where criteria for selecting suitable areas included the impact of aquaculture on the environment, the existence and interests of other actors and their interrelation with aquaculture.

The assessment consisted of three phases. In the first phase, so-called elimination criteria were drawn up that would exclude all those areas from further consideration that were definitely unsuitable for aquaculture (Table 1) 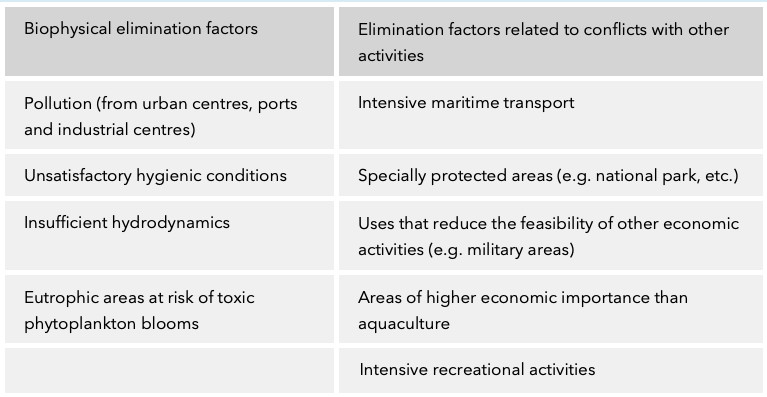 In the second phase, criteria relating to biophysical conditions were applied. Understandably, the set of criteria and what constituted optimal values ​​depended on the species to be farmed and the breeding technology to be used. Therefore, this phase of spatial analysis was done separately for each potential type of aquaculture.

The last, third phase of spatial analysis examined aquaculture conflicts with other sectors. As conflicts between sectors competing for the use of the same resources are solved primarily through negotiation, the multi-criteria study could only inform this process by pointing to the advantages and disadvantages of certain development options and possible complementary relationships.

Tourism is intensive in the narrow coastal area; large marinas and the majority of accommodation are located there. Figure 6 shows potential aquaculture zones (in yellow) that had not been excluded by any previous criteria but that were subsequently excluded due to conflicts with the tourism sector (areas of intense tourist activity). 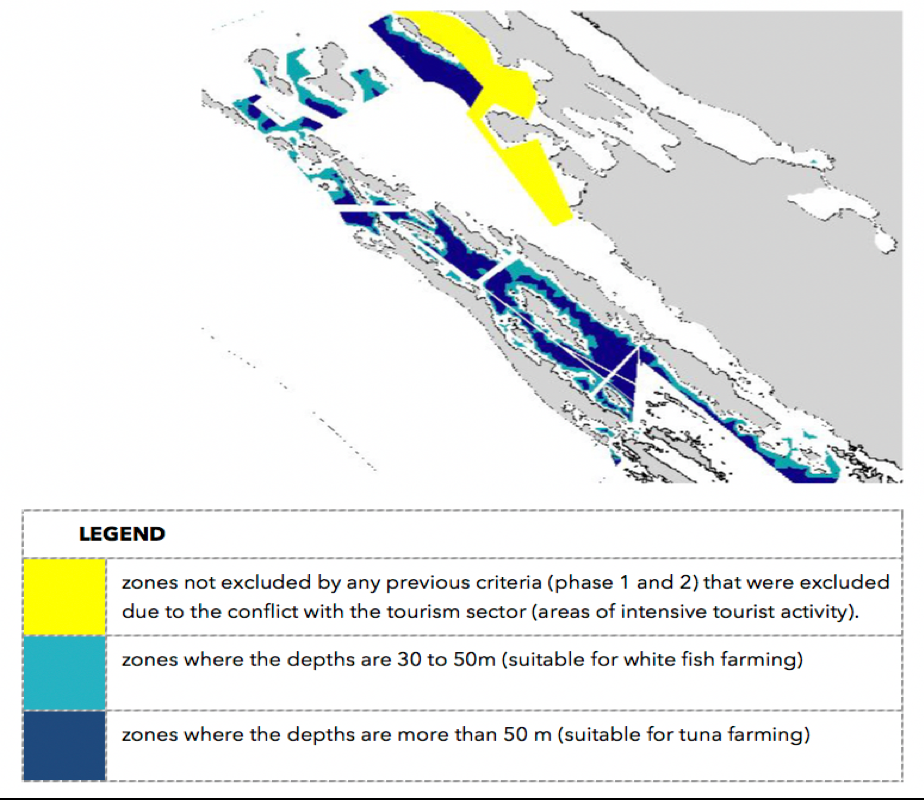 Apart from defining general aquaculture zones, the study also made recommendations to: