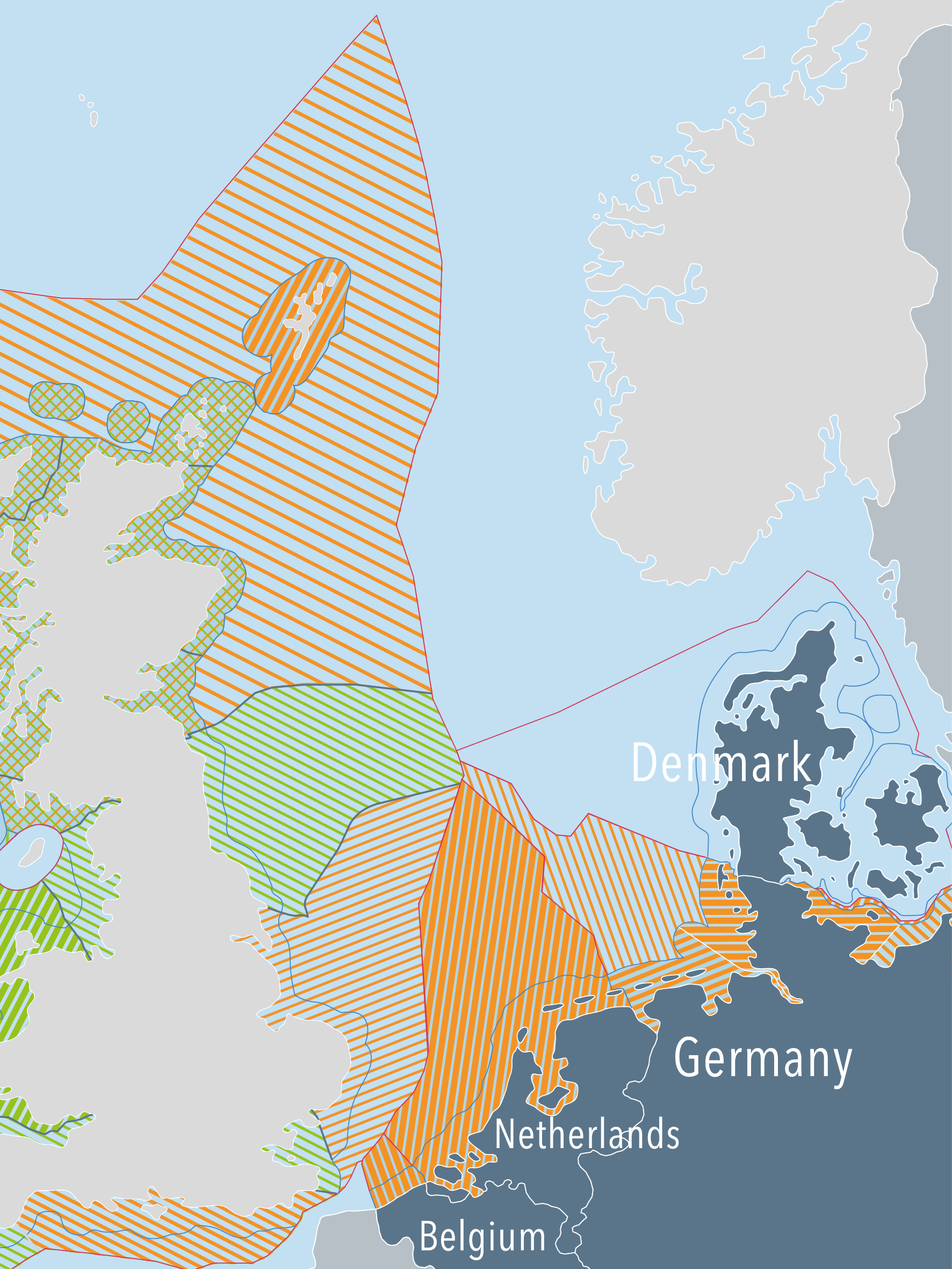 General Introduction to the North Sea

The North Sea region is bordered by a number of strong economies: France, Belgium, Netherlands, Germany, Denmark, Sweden, Norway (non-EU member but a member of the European Economic Area) and the United Kingdom (England and Scotland) (non-EU member), and is one of the most heavily used seas with extensive shipping, fishing, energy (hydrocarbon and offshore wind), aggregate extraction, defence, recreation and it also includes 2 of the world’s largest ports (Rotterdam and Hamburg).

The Blue Growth potential of the North Sea area was analysed in a 2014 report (“Blue Growth Scenarios and Drivers for Sustainable Growth” (Ecorys, et al., 2012) which estimated that the North Sea’s maritime (blue) economy represented at least €150 billion (or approximately 30% of the EU total) and employed at least 850,000 people. The following key sectors are considered the most important in the North Sea: offshore wind, offshore oil & gas, aquaculture, shipping, shipbuilding, cruise tourism and coastal protection.

The North Sea is relatively shallow, with an average depth of 90m and a maximum depth of 700m. The seabed is mainly composed of mud, sandy mud, sand and gravel with an important variety of marine landscapes, including fjords, estuaries, sandbanks, bays and intertidal mudflats. The North Sea is situated in temperate latitudes with a climate that is strongly influenced by the inflow of oceanic water from the Atlantic Ocean and by the large-scale westerly air circulation which frequently contains low pressure systems. Extreme weather conditions have a direct impact on hydrography, which is characterised by water exchange with surrounding ocean areas, and strong tides.

Biological systems in the North Sea are rich and complex with significant areas of importance for birds, fish and marine mammals. Approximately 230 species of fish are known to inhabit the area, with important spawning grounds for a number of commercial species and prey for birds and marine mammals. Some 10 million seabirds are present at most times of the year with extensive migration of protected species across the region. Marine mammals appear regularly over large parts of the North Sea including the long-finned pilot whale, harbour porpoise, common dolphin, white-sided dolphin, Risso's dolphin, killer whale, grey seal, harbour seal, hooded seal (OSPAR, 2015).

A number of areas are highly important for nature conservation, including the Dogger Bank in the southern North Sea, which is protected under the EC Habitats and Birds Directive (with different approaches) by the countries which include this area within their EEZ (UK, Netherlands, Germany and Denmark). The whole of the North Sea has been declared a special area under Annex V of the MARPOL Convention (the International Convention for the Prevention of Pollution from Ships) which prohibits release and disposal of garbage and other domestic wastes from ships.

MSP in the North Sea

The nations bordering the North Sea are developing MSP to fulfil their requirements under the EU Directive for MSP, to deliver maritime spatial planning by March 2021. The following MSP activity is under way in the North Sea.

The first MSP for the Belgian part of the North Sea was adopted in 2014 and the second Belgian MSP was signed into law by the King on 22 May 2019 and published in the Belgian Official Gazette on 2 July 2019. It entered into force on 20 March 2020.

Maritime spatial plans exist for the German North Sea and Baltic Sea EEZs and for the territorial sea areas under jurisdiction of the three coastal federal states (Lower Saxony, Schleswig-Holstein, and Mecklenburg-Vorpommern). The process of revising the MSP has been completed after two rounds of national and international consultations. Changes were made based on the feedback received and the revised MSP for the German EEZ in the North Sea and Baltic Sea entered into force on 1 September 2021.

Denmark has a range of sectorial plans that will provide key inputs to the MSP planning process. These plans have provided key contributions to the MSP planning process in Denmark. The Danish maritime spatial plan for the sea was finalised and launched in March 2021. A public consultation on the Maritime Spatial Plan and the Environmental Assessment started on 31 March 2021 for a period of six month and ended on 30 September 2021.

National initiatives include developing arrangements for planning across jurisdictional boundaries, however there is currently no MSP at a North Sea scale. A need for strategic action has been noted, but a lack of overarching authority with a broad enough remit to facilitate the political co-operation required presents a key challenge. There is international co-operation on a regional basis; the Wadden Sea Forum provides a mechanism for Dutch-German-Danish trilateral co-operation including on Integrated Coastal Zone Management (ICZM) and provides a basis for co-ordination with regard to MSP.

The North Sea Commission is a politically-led cooperation platform for regions around the North Sea, bringing together the Presidents and delegates appointed by the Regional Authorities immediately below the level of Government which border the North Sea. Through dialogue and formal partnerships, they aim to promote common interests, especially in relation to European Union institutions, national governments and other organizations dealing with issues that are relevant to the North Sea. The focus for the North Sea Commission's work is the North Sea Region 2020 strategy document. It defines the following focus areas under the priority 'Managing Maritime Space'; maritime spatial planning, exploitation of marine resources and the North Sea Maritime Stakeholder Forum.

The Commission has a thematic working group called Marine Resources, which includes a number of measures related to MSP in the North Sea, including exchange of best practice on MSP and ICZM across the North Sea and promoting dialogue between all users of the North Sea to facilitate policy integration.

NSMC is a not-for-profit collaboration between business, scientific and academic expertise for the benefit of the regional marine sector, developing new avenues for marine science and service, and fostering collaboration across the marine-related sectors in the North Sea.

A web-based forum for sharing information relevant to maritime affairs across Member States.

This MSEG meets on a regular basis and with the objective of developing the guidance supporting the implementation of the MSP Directive, on aspects such as co-operation across borders and the use of data.

OSPAR monitors MSP developments as these relate to implementation of the Marine Strategy Framework Directive but no longer has an active MSP working group.

MASPNOSE was a study carried out for the European Commission, focussing on the issue of cross-border maritime spatial planning. The project undertook two case studies in the North Sea, engaging governmental parties and stakeholders (fisheries, NGOs and other industry bodies). One focussed on developing an international fisheries management plan for the Dogger Bank in the central North Sea, and the second looked at potential areas of collaboration for wind energy and the harmonisation of marine planning on Thornton Bank in the southern part of the North Sea. The project concluded that cross-border co-operation efforts often lacked commitment and did not lead to a unified marine spatial plan for the area, and that a pre-agreed process with a clear mandate and responsibilities was necessary.

European Commission Strategy for an Energy Union on 25 February 2015