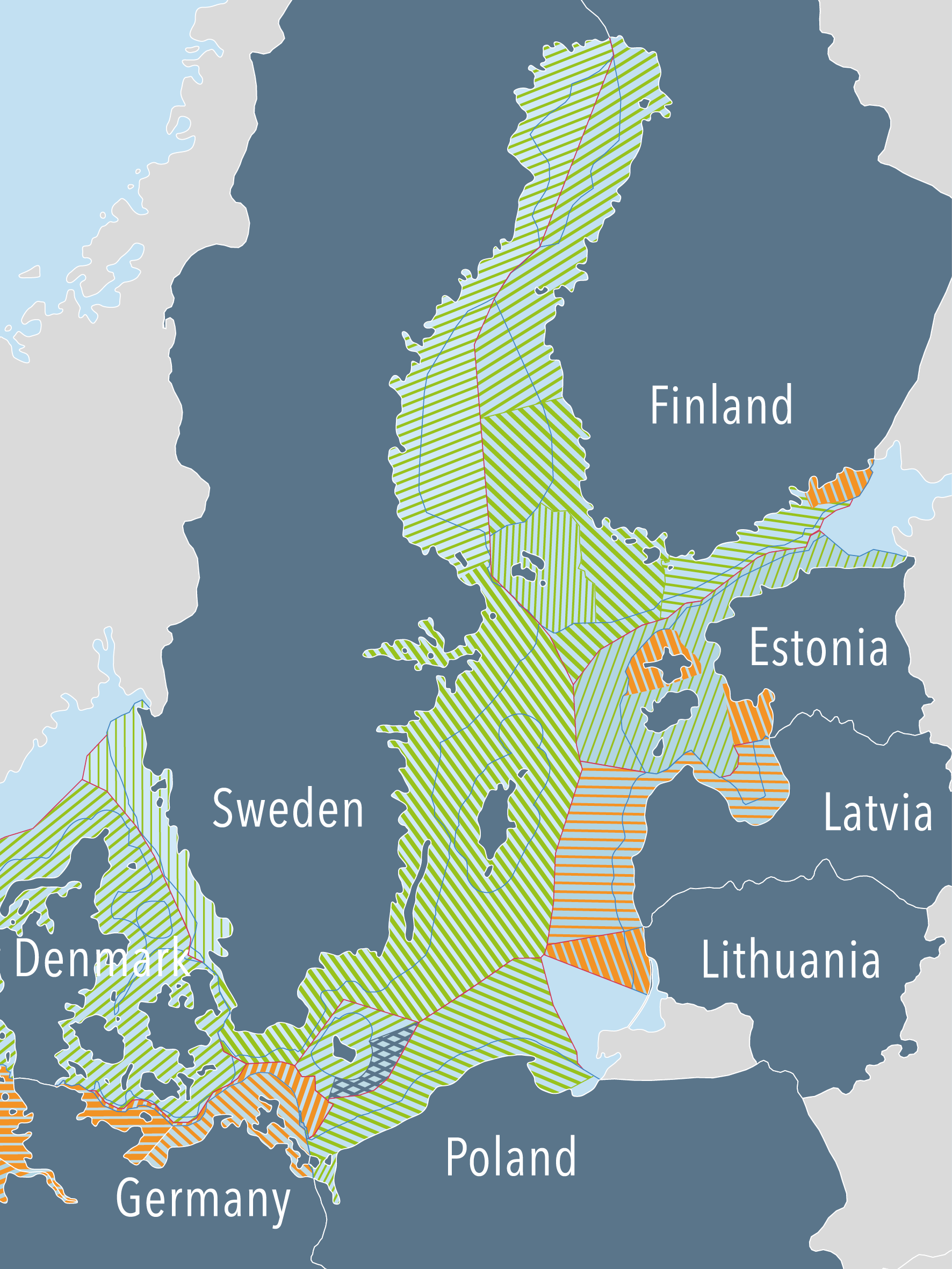 Become a Maritime Spatialist in 10 minutes

Towards a Pilot MSP for the Lithuanian Sea

A transboundary MSP pilot in the Bothnian Sea

Best practice in consultation for MSP

The Baltic Sea is a semi-enclosed sea basin with a total area of 397,978 km². It is bordered by nine EU member states (Denmark, Germany, Poland, Lithuania, Latvia, Estonia, Finland, Sweden) and Russia. The Baltic Sea can be divided into the following sub-regions: the Gulf of Finland, the Gulf of Bothnia, the Gulf of Riga, Baltic Proper (which includes the Gulf of Gdansk), the Danish Straits and the Kattegat.

The Baltic Sea is a relatively shallow body of water with an average depth of only 54m. It is a brackish water ecosystem characterised by high biological production. The coastal ecosystem operates as a breeding and nursery ground for many fish and invertebrates, and deeper waters provide habitat for pelagic fish, such as herring and sprat.

The different functions possessed by the Sea,  such as shipping, fisheries, wind farms or mineral extraction, are increasingly competing for the limited sea space. On top of this, the fragile Baltic ecosystem and the threats of climate change call for a balanced multi-sectorial approach.

MSP in the Baltic Sea

The nations bordering the Baltic Sea are developing MSP to fulfil their requirements under the EU Directive for MSP, to deliver maritime spatial planning by March 2021. The following MSP activities are under way in the Baltic Sea:

A public consultation on the Maritime Spatial Plan and the Environmental Assessment started on 31 March 2021 for a period of six month and ended on 30 September 2021.

Estonia does not yet have an adopted national MSP, but they are in the final stages of developing one. Estonian MSP has been submitted to the government for adoption in February 2022.

An MSP Plan for the Åland Island is developed according to its own maritime spatial planning legislation as Åland Island is an autonomous region of Finland.

Maritime spatial plans exist for the German North Sea and Baltic Sea EEZs (2) and for the territorial sea areas under jurisdiction of the three coastal federal states (Lower Saxony, Schleswig-Holstein, and Mecklenburg-Vorpommern) (3).

The process of revising the MSP has been completed after two rounds of national and international consultations. Changes were made based on the feedback received and the revised MSP for the German EEZ in the North Sea and Baltic Sea entered into force on 1 September 2021.

The Maritime Spatial Plan for Internal Waters, Territorial Waters and Exclusive Economic Zone of the Republic of Latvia (MSP 2030) was adopted by the Latvian Government in May 2019, under the Order of the Cabinet of Ministers No. 232 (21 May 2019). Two years since its adoption, the work to revise the plan is ongoing.

Lithuania has adopted its new Comprehensive Plan (2nd) that includes MSP on 29 September 2021. The plan is now under translation. The Lithuanian version is available at the portal of spatial planning documents: https://www.tpdris.lt/lt_LT/web/guest/sarasas by entering plan number: K-NC-00-17-288, choosing “Rengimo etapas“ and then “TPD sprendiniai (aiškinamasis raštas ir brėžiniai)“. Drawings ant explanatory part of the plan can be downloaded there. The strategic section called the Concept of Comprehensive Plan for the territory of the Republic of Lithuania (CPRL) was approved by the Parliament on 4 June 2020.

On 14 April 2021, the Polish Government (council of Ministers) adopted a regulation on the Polish spatial development plan for internal sea waters, the territorial sea and the exclusive economic zone on a scale of 1: 200,000.  The plan has been in force since 22 May when it was published in the official Journal of Law.

Three national plans covering the territorial sea and the EEZ are in preparation: Skagerrak/Kattegat, Baltic Sea and Gulf of Bothnia. In Autumn 2019, the Swedish Agency for Marine and Water Management was in the process of finalising the country’s marine spatial plan proposals and on 17 December 2019, they delivered the final version to the Government. The Government is now preparing the marine spatial plans for adoption.

The MSP plan was adopted by the Government of Sweden on 10 February, 2022. National MSP data is available on the Swedish Agency for Marine and Water Management website at: www.havochvatten.se

The joint Baltic Sea MSP Working Group, established by HELCOM and VASAB, is a forum for intergovernmental discussions on MSP. The Working Group hosts dialogues on recent and future developments in the field of MSP in the Baltic Sea Region.

Visions and Strategies Around the Baltic Sea (VASAB)

VASAB is an intergovernmental multilateral co-operation of 11 countries of the Baltic Sea Region (BSR) on spatial planning and development. Its current work is guided by the 2009 “VASAB Long-Term Perspective for the Territorial Development of the Baltic Sea Region” strategic document, which considers MSP as a key instrument for the alleviation of potential sea use conflicts.

HELCOM is the governing body of the Convention on the Protection of the Marine Environment of the Baltic Sea Area (Helsinki Convention). In 2007, HELCOM developed the new Baltic Sea Action Plan (BSAP), which introduced MSP as a process aiming at more coherent management of human activities in the Baltic Sea.

The EU Strategy for the Baltic Sea Region (EUSBSR) is organised according to three overall objectives: saving the sea, connecting the region and increasing prosperity. The 2013 Action Plan comprises 17 thematic Priority Areas and 5 cross-sectional Horizontal Actions. Leaders of the Horizontal Action “Spatial Planning” are HELCOM and VASAB.

The Baltic model of MSP development is based on a political framework through ministerial cooperation (VASAB). It acknowledges, as the Baltic Sea has no physical barriers, that it should be used and protected within a wider, supranational perspective. With the publication of 2010+ Spatial Development Action Programme in 2001 and the adoption of the Gdansk Declaration in 2005, VASAB was the first organisation to call for the introduction of MSP in the Baltic Sea region.

In 2007 the EU Blue Book on Integrated Maritime Policy introduced MSP as tool for the sustainable development of marine areas and coastal regions. In the same year the HELCOM Baltic Sea Action Plan (BSAP) referring to broad-scale MSP principles based on the ecosystem approach was adopted.

In parallel to political developments – starting in 2002 -, methodology was tested and practical planning experience was gained through cross-border pilot projects such as BaltCoast, PlanCoast, BaltSeaPlan, PlanBothnia and PartiSEApate. Lessons learnt were implemented in strategic documents at the political level. In turn, new cooperation projects were initiated to find organisational and institutional solutions for MSP. Within these projects, or using experience of them, formal maritime spatial plans were developed in Germany. Poland, Latvia, Lithuania and Estonia developed pilot maritime spatial plans with transnational elements. Currently, in the light of the new EU Directive for MSP from 2014, which is also calling for cross-border cooperation in MSP, all EU Baltic Sea States are in the phase of planning, establishing or evaluating national MSPs. They have to be in place by March 2021.

The Council of the Baltic Sea States (CBSS) is a political forum for regional intergovernmental cooperation. The CBSS addresses MSP-related issues through its Expert Group on Maritime Policy, which comprises experts from all Baltic States’ maritime authorities with a focus on maritime traffic management and surveillance.

The Baltic Sea States Sub-regional Co-operation (BSSSC) is a political network consisting of regional authorities from the 10 littoral states of the Baltic Sea.

Steering Committee for the EUSBSR Priority Area on Clean Shipping

(i) Text adapted from the following sources: