The WestMed Strategy project was commissioned by the Executive Agency for Small and Medium-sized Enterprises (EASME) and the Directorate General for Maritime Affairs and Fisheries (DG MARE). Its main objective was to prepare a Maritime Initiative for the Western Mediterranean and the development of an action plan to implement this.

The key objective was to find practical areas of cooperation which could help all countries involved to bring sustainable maritime economic development (the Blue Growth concept).The vision was also to address the major environmental challenges of the sea-basin, transform existing economic activities into less polluting and resourceful activities, and to promote opportunities for green growth. Safety and security were also considered a prerequisite for such development, as well as for the continuation of the democratic, modernisation and peace process.

Next to extensive desk research, active engagement with stakeholders formed the heart of the approach - not only to validate findings and ensure that interests and concerns were properly taken into account, but also to gauge and generate support for the course of action that would ultimately be proposed. These consultations were both on- and offline and were aimed at the whole maritime community situated around and using the Western Mediterranean.

The first phase was meant to obtain a good understanding of high potential areas for cross-national and cross-sectoral cooperation. It was the basis to assess the possible added value for the EU and (political) readiness for this initiative. A review of the existing literature regarding economic, social and environmental contexts and challenges was conducted in order to set the scene. In addition, existing governance and cooperation agreements which could support the development of a maritime strategy in the Western Mediterranean were identified and reviewed. Findings were be tested more in-depth through four Focus Group meetings with stakeholders in order to ascertain and obtain their ownership for endorsement.

The second phase of the project focused on drafting the Initiative and its Action Plan in much more detail. It built further on the cooperation options with broad stakeholder engagement, both offline and online. Offline, with the celebration of a number of events to reach stakeholders who were potentially interested and affected by such a strategy. And online, by inviting people  to read the Newsletters and some join web-based discussions on specific topics that were set up. 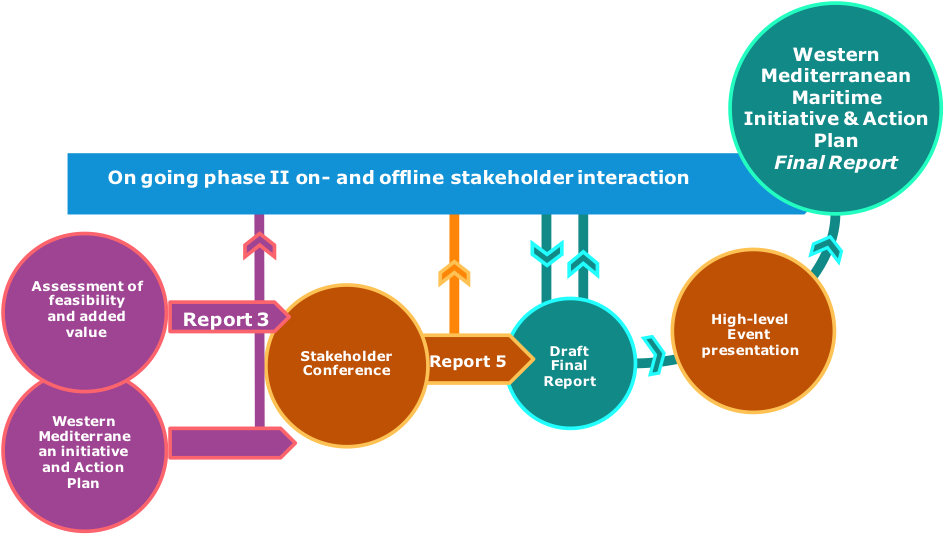 The WestMed Strategy project was carried out from December 2015 to August 2017 by a consortium that consisted of three highly qualified organisations. These three organisations combined their networks, skills and experience to ensure a solid outcome. Their extensive know-how included working with a wide variety of maritime stakeholders from countries bordering the Western-Mediterranean sea-basin. As a result, they were fully aware of and experienced with its complexity when it comes to political governance and socio-economic and environmental data-gathering.