1. Delimitation of the smaller planning areas through application of a rigorous set of environmental and transport/shipping criteria (so sectors prioritised in UNCLOS) 2. Four dimensional zoning whereas sea maps have only two dimensions, 3. Zoning under maritime spatial plans of a large resolution (scale 1:25000).

The maritime spatial plan of the western part of the maritime internal waters of the Gulf of Gdańsk is of a pilot nature. It has been drawn up at the order of the Maritime Office in Gdynia that had acquired funds to that end under the “PlanCoast” EU project. The development of a draft of the pilot plan was considered as a practical attempt at testing the possibility of drawing up maritime spatial plans in ecologically valuable sea areas under pressure from numerous anthropogenic conflicts (the coastal areas of Gulf of Gdańsk are home to more than 1 million inhabitants of the Gdańsk-Gdynia-Sopot metropolitan region- the biggest coastal metropolises in Poland and its two largest harbours: Gdynia and Gdańsk). The plan was also supposed to improve the awareness of Polish decision-makers and stakeholders of the necessity for the implementation of spatial planning in Poland’s maritime areas. In addition, it was expected to provide conclusions regarding the further directions of developmend for  the spatial planning system in Poland.

The plan was worked out by an interdisciplinary team from the Maritime Institute in Gdańsk, representing the following scientific disciplines: macro-spatial planning, information technology (GIS), oceanography, physical/biological ecology and economics. The team gained support from experts of the Voivodship (Province) Spatial Planning Office (local spatial planning), ichthyologists and specialists on sea mammals. The process of elaboration for the plan was extremely short, owing to financial terms of the PlanCoast project and lasted from September 2007 until March 2008. The initial version of the plan was produced in April 2008 and it was discussed with Maritime Office staff, amended  and  then presented to stakeholders in June 2009 for further amendments.

The area subject to planning had a surface of about  40 550 ha, situated to the West of the line connecting the head of the Hel Peninsula with the Gdynia/Sopot boundary, with the exclusion of the harbour areas of Gdynia, Puck, Jastarnia and Hel. The area adjacent to Gdańsk city was also excluded. The screening of existing users at the start of plan preparation allowed for the identification of the following spatial structures with corresponding water  areas: fairways, roadsteads and anchor grounds  (5316.97 ha), dumping areas (591.80 ha), sand extraction areas, as well as water areas excluded from common use (4061.75 ha). As regards the remaining part of the area covered by the plan (i.e. 31171.28 ha), the functions were mixed with a prelevance of fishery and water sports. In terms of transport, the area serves the harbours of Gdynia, Puck, Jastarnia and Hel. Environmental functions were of key importance there, reflected in the protection regime for Natura 2000 areas. These include a Natura 2000 bird protection site  (PLB220005, 40576 ha), Natura 2000 habitat protection site (PLH220032, 21479 ha) and areas protected under the Coastal Landscape Park scheme (10534 ha). 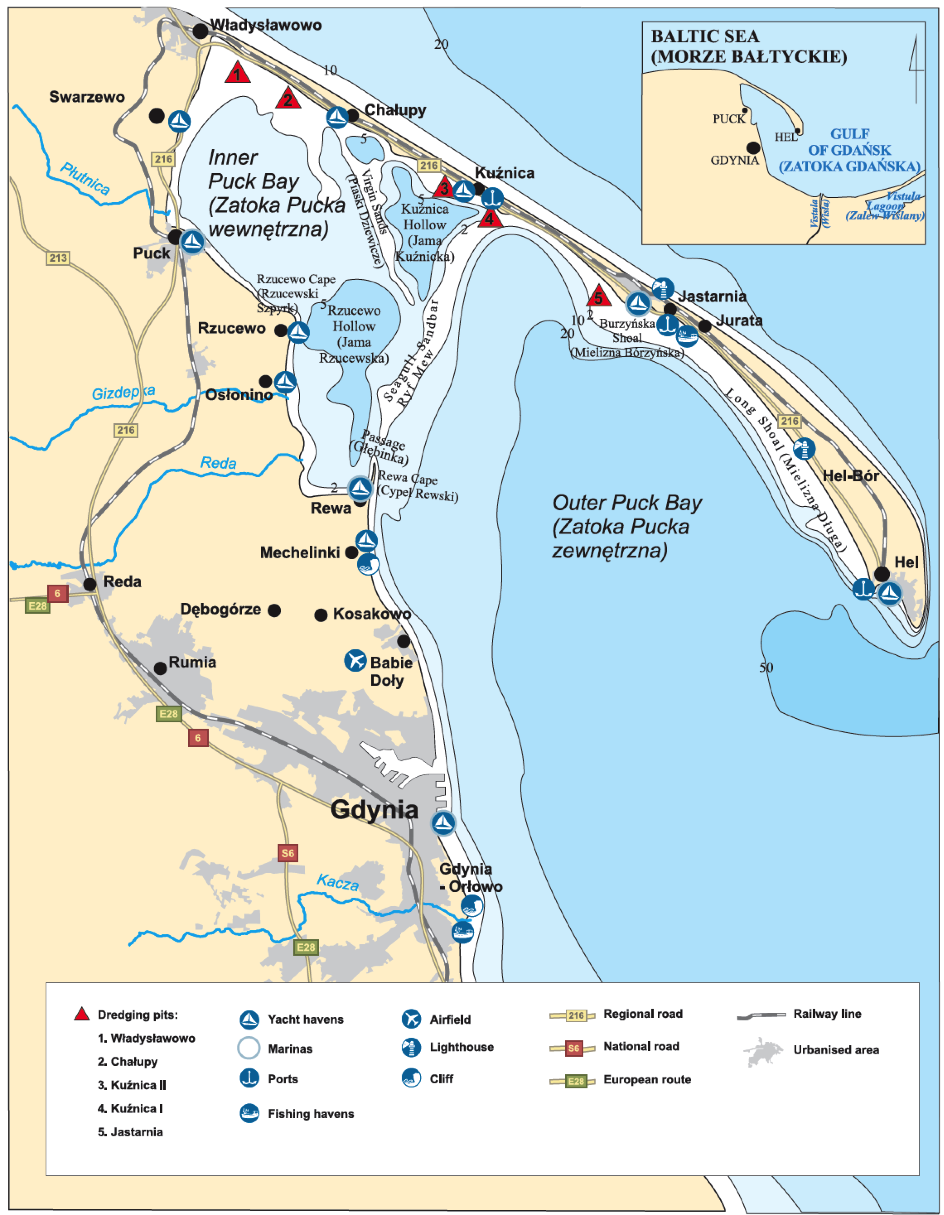 The draft plan for spatial management of part of the internal sea waters of the Gulf of Gdańsk has been developed with regard to the objectives indicated by the Maritime Office of Gdynia, as follows:

The draft plan provides for:

The plan was regarded as an instrument of reconciliation of the various interests attached to the use of sea space: it united national planning (the National Spatial Development Concept) with the local/detailed one (on the sea), and brought together land and maritime spatial planning. On the one hand, the plan was a structural one, as it provided a diagnosis of spatial conditions of development, specified components of the spatial system and their mutual relationships and pointed out their desired form of development of a vast sea area (equal to the territory of 2-3 rural communes). On the other hand, it acted like a local plan in settling certain specific limitations in the utilization of space.

Since the plan covered environmentally valuable areas subject to many economic pressures, it was decided that the whole planned area should be divided into smaller sea areas (basins) in order to properly reflect their specificities. Thus the plan is of a comprehensive nature and is similar to the terrestrial master plans on land. In terrestrial spatial planning, the spatial grid is based on a network of already existing plots of land, determined by the right of ownership. The sea space must be divided using different criteria. However, the marine space (being a common property from a legal point of view) can be treated as divided by a whole range of functional processes providing internal coherence of its discrete parts. Thus in the pilot plan an attempt was made to divide sea space in line with functional links.

For the area in question it was acknowledged that transport and ecological processes are of key importance in that respect. The starting point for delimitation of the water areas was a natural valuation of the region.  It was assumed that the spatial grid within the planned area will be composed of areas of valuable habitats and transport corridors of a high traffic density or requiring dredging to allow maintenance of the existing port functions. The fairways that required dredging were recognised as independent functional water areas. Thus while  observing international conventions on maritime transport, the plan tried to minimise environmental threats on the part of the maritime transport to the sea (water) environment. The aforementioned plan also provided an opportunity for smaller settlements to develop – considering recreational navigation in particular – while limiting harm to ecologically valuable areas, which was important due to the existence of Natura 2000 sites.

The area covered by the plan was divided into 30 water bodies marked using digit and letter codes, making use of the aforementioned functional approach:

The following numbers of specific types of water areas (sea basins), were distinguished for their dominating function: 12O, 6RS, 4K, 4A, 2BP, 2L (tab.1). For each water area, detailed requirements concerning the ways of its utilization have been set up, entered into a water area chart. An example of such a chart is given in the output section. In addition, some general provisions applicable to the whole area covered by the plan were also formulated with regard to:

The draft spatial management plan includes a graphic and a text part. The draft text of the plan comprises, in particular, provisions concerning principles of management and use for specific water areas determined in the plan.  The draft drawing of the plan has been made in a    1:25 000 scale. The graphic part is presented below. 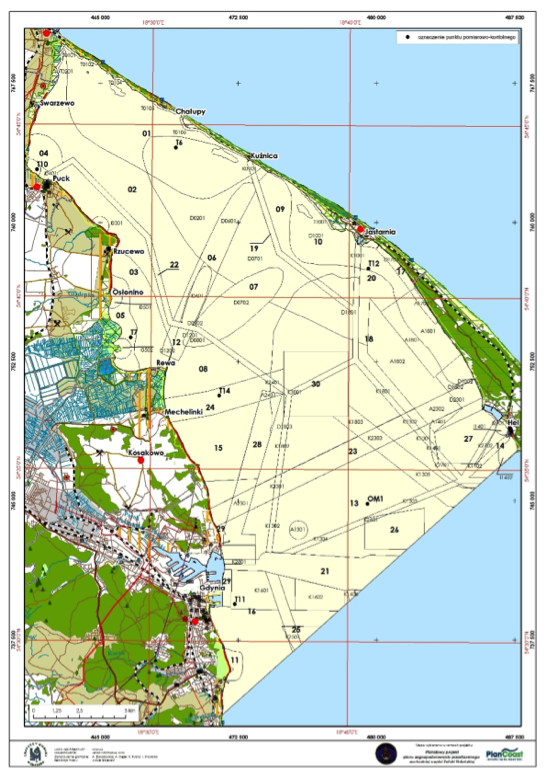 An important element of the plan are the water area charts, in which all provisions are presented in detail. An example for sea basin area no.14 is given in the figure below: 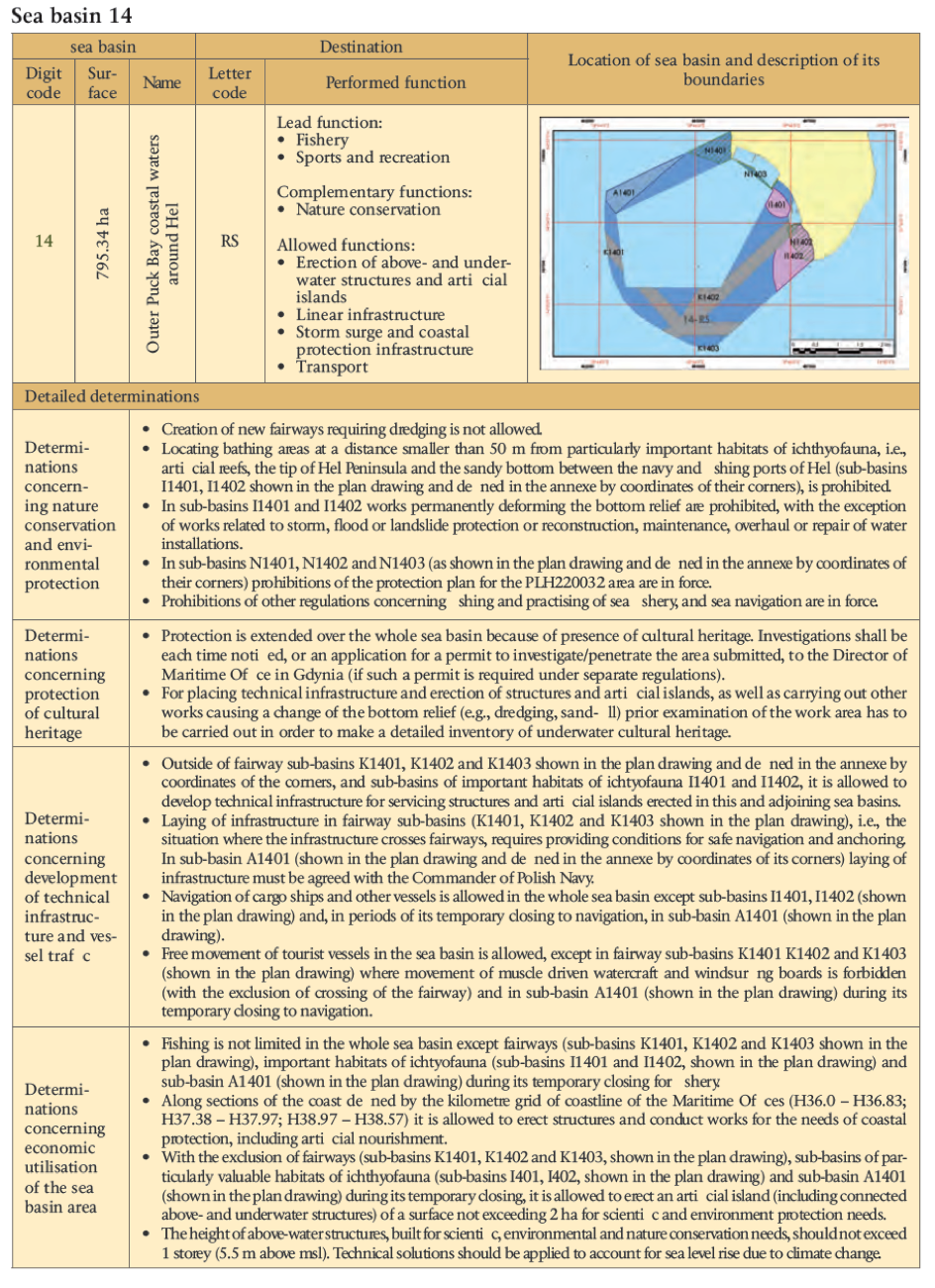 This practice is applicable in any sea area of similar conditions: high ecological value, intensive socio-economic pressures, and occurrence of different types of spatial conflicts. In other circumstances it should not be used to avoid the impression of over-planning.