Spatial planning for fisheries in the Northern Adriatic Sea

In the framework of ECOAST Project the DISPLACE fish and fishery model was applied to the Northern Adriatic Sea, an area characterized by intense and conflicting fishing activities, calling for science-based management actions. In this context, DISPLACE enabled assessing the effects of a suite of five spatial management scenarios (also called mitigation plans) suggested by practitioners, aiming to reduce conflicts between different fishery activities (trawling vs small-scale fishery) and the pressure on four demersal fish stocks of high commercial interest. Specifically, the effects of such scenarios on the sustainability of fish stock exploitation as well as the economic profitability of fishery were evaluated. A summary comparison among the investigated alternative spatial management scenarios was finally provided for policy makers in order to support a science-based effective management of fishery and fish stocks.

The study was supported by the EU funded projects ECOSEA (IPA Adriatic CBC Programme 2007–2013) and ECOAST (FP7 ERA-net COFASP). ECOAST aims to identify, develop and test new methodologies for spatial and temporal management of fisheries and aquaculture in coastal areas, taking into consideration their impacts on coastal and marine ecosystems, as well as synergies and conflicts with other uses.

The DISPLACE model was applied in the area of the Northern Adriatic Sea, specifically in the Geographical Subarea – GSA 17. The great overfishing of demersal resources in this area, with conflicts among different fishing activities, call for a proper management of the fish stock exploitation, in order to achieve the targets set by EU Common Fisheries Policy.

The study applied to the Northern Adriatic Sea the DISPLACE model, an agent-based simulation model developed to support marine spatial planning and management issues, especially from the perspective of fisheries. Spatial resolution (2x2 Km) and time resolution (hourly time steps) are adequate to catch the spatial and time dynamics of fish population and of human decision making process. The model is designed to capture the fishing fleet dynamics at the scale of the individual fishing vessel and to handle the population dynamics of fish species. In the case of the study on the Northern Adriatic Sea four important commercial species were taken in consideration: hake (Merluccius merluccius), common sole (Solea solea), red mullet (Mullus barbatus) and the spottail mantis shrimp (Squilla mantis).

Simulations of five different spatial management scenarios for fishery were performed over a 5-years horizon with the purpose of evaluating the benefits that would arise in the case of modifications of fishing grounds. The five tested scenarios were: 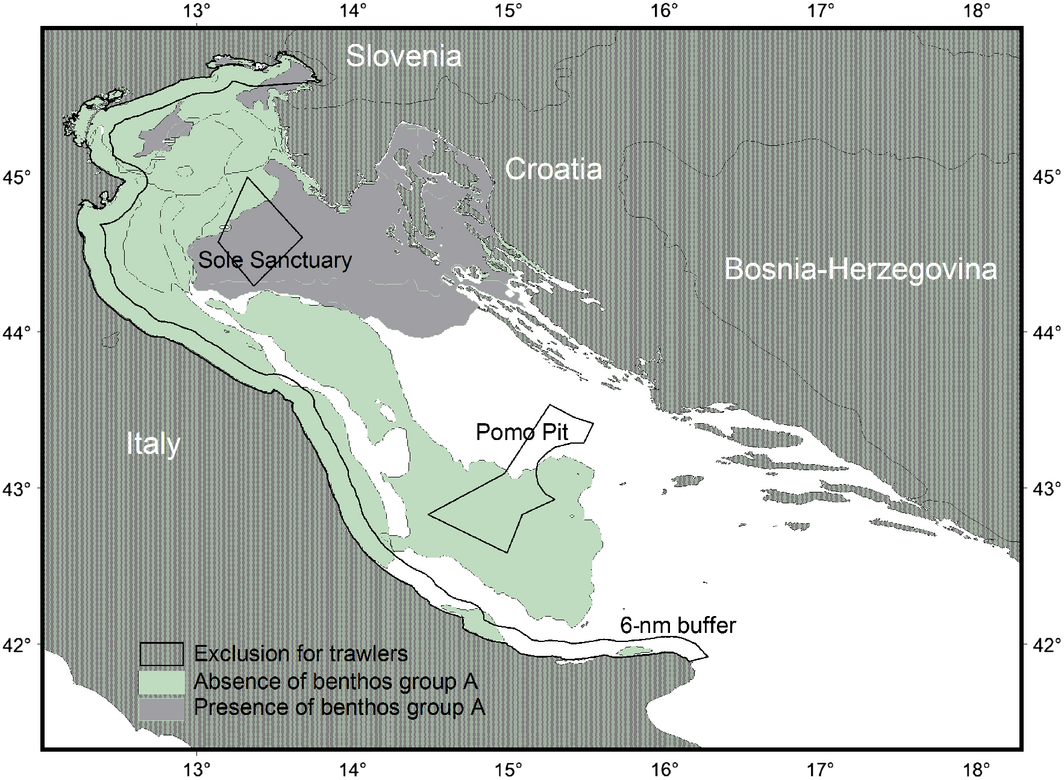 The study contributed to the assessment of the effects of various spatial management scenarios for fishery, in term of mitigation of conflicts among different fishing activities (e.g. trawling vs small–scale fishery) and evaluating whether these changes would make exploitation of fish resources more sustainable. The results can constitute a science-based input to facilitate policy improvement and a better governance of fish stocks and fishery management in the Northern Adriatic sea. An operational summary of the results of the scenario modelling and analysis (compared to the baseline) is provided by the study to help policy makers to choose the best policy option. In this summary table the foreseen change of each key element (stock status for the four considers species, fleet status and benthos status) is reported with the main associated uncertainties, offering clear policy guidelines.

Among the main findings of the study, the authors highlighted the fact that fishery activities still remain profitable for all tested spatial management scenarios. Their implementation would also slightly improve the sustainability of the harvesting by reducing the fishing pressure, especially on the coastal components of the harvested populations or at vulnerable times in the species’ life histories. However, the tested mitigation plans were considered helpful but not sufficient to ensure real sustainable fishing in the area, requiring additional measures to be taken to reach the management targets set by the EU Common Fisheries Policy.

The DISPLACE model was specifically applied to the Northern Adriatic Sea, using data available for this area (Italian fishing efforts and typologies, population distribution and dynamics, benthic habitats). However, the used methodology could be applied everywhere. Results of the study aims to provide science-based input to a more sustainable management of fishery activities and fish stocks.

For the study on DISPLACE application in the Northern Sea

Funding for this study was provided by the ECOSEA Project Code. 236—IPA Adriatic CBC Programme 2007–2013—and the EU FP7 ERA-net COFASP ECOAST Project under Grant Agreement No. 321553.