Spatial Demands and Scenarios for Maritime Sectors and Marine Conservation

To achieve this objective, research has involved:

• An analysis of existing spatial constraints, demands and expectations for growth of key sectors

As outlined in the Overview Report on the Current State and Potential Future Spatial Requirements of Key Maritime Activities, the first initial step was examine what is meant by scenarios and how they are used in planning (including MSP). They key lessons that were drawn out from previous studies and other lessons learnt were then applied and used to develop a methodology for scenario building within the Celtic Seas.

A series of 5 maritime sector briefing notes were developed in order to consider the current spatial patterns of development for a limited number of key maritime sectors. Due to the time constraints of the project the number of sectors selected were limited and based on the following main criteria:

The sectors which met this criteria were Aquaculture, Cables & Pipelines, Offshore Wind Energy, Ports and Shipping and Wave and Tidal Energy. Following the selection the notes were developed between January 2017 and February 2018 and circulated to a wide audience of stakeholders for feedback ranging from government departments and agencies, industry and private sector organisations, NGOs and academics.

The briefing notes are structured as follows:

In order to develop the SIMCelt scenarios information from the sector briefing notes, feedback from stakeholders, additional material from other reports and articles were brought together to form the basis of a set of maritime scenarios designed to prompt future discussion with regards to future development of different sectors within the Celtic Seas and the effect this have on transnational cooperation.

The scenarios were  developed using the four quadrant or ‘possibility space’ approach with two main variables used to construct the horizontal and vertical axis respectively and focused on:

These two dimensions or characteristics of future sectoral activities were then used as the basis for the two axes in a possibility space. Along the horizontal axis, changing spatial footprint is measured with spatial effusion vs efficiency. Along the vertical axis, degree of cooperation between administrations were considered examining a highly cooperative scenario vs one where a high degree of autonomy exists between different countries. These dimensions were used to create the SIMCelt possibility space. 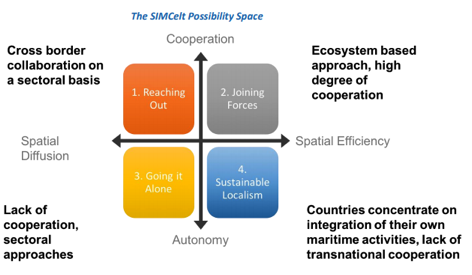 Following defining the key dimensions of the possibility space each of the four scenarios listed in the diagram above a set of four more detailed storylines were created for each one details descriptions for each can be found in the Overview Report listed below. The impacts on sectoral drivers and planning issues across all the sectors in the Briefing Notes and drawing on drivers identified from the comparative study of Marine Protected Areas, were then mapped on to the possibility space in order to create storylines for each scenario.

This was done by:

The diagram below shows an example of how the ‘Possibility Space’ was populated. 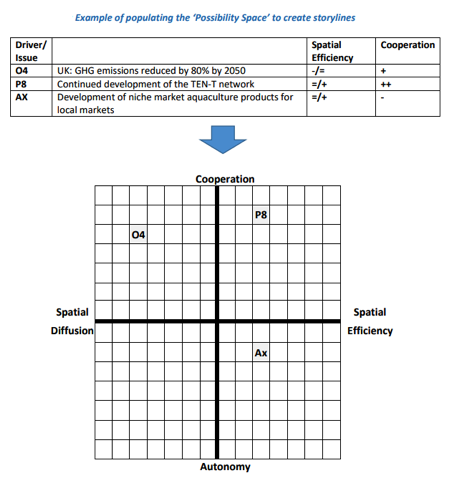 Each of the fours scenarios were tested and stakeholder views obtained at a workshop held at the University of Liverpool London campus in September 2017. Participants were divided into four sectoral groups best representing their interests and then contributed to three interactive sessions examining Sectoral Ambitions, Sectoral Interactions and Promoting Cross-Border cooperation. The full results of the Workshop can be found in the Overview report mentioned below.

This set of briefing notes provide information on the current status and trends of each sector within the Celtic Seas, associated marine planning policies and the drivers of change that may affect how each sector develops in the future. Finally, a Comparative Analysis of National Strategies for Marine Conservation in the Celtic Seas Region (de Magalhaes et al, 2017) was undertaken. This report provides insights into the governance of Marine Protected Areas (of numerous types) at international, European and national levels and identifies key similarities and differences between management approaches, recognising that different types of protected area can prohibit human activity, but also through an ecosystem-based approach allow for certain types of activity within limits.