The South Inshore and Offshore Marine Plan Offshore Plans were combined into the second English marine plan to be adopted in England, UK. The practice outlines the contents and objectives of the plan along with providing details regarding available supporting documentation including Sustainability Appraisals.

The Marine and Coastal Access Act 2009 established the legal basis for marine planning in England. The Marine Management Organisation (MMO) is the responsible authority for delivering marine planning in England. England’s marine area was divided into 11 marine regions, with inshore and offshore components which will total up to 10 plans. The South Inshore and Offshore combined Marine Plan is the second to be published in England. The South Marine Plan conforms to the Marine and Coastal Access Act (2009) and UK Marine Policy Statement requirements. The South Marine Plan has been prepared in accordance with, and gives consideration to, the EU Maritime Spatial Planning Directive (2014/89/EU) which supports the Integrated Maritime Policy for the European Union.

The overall vision for the south marine plan area states the area’s iconic and unique qualities, and that its characteristics and culture will be conserved, promoted and where needed enhanced, through good management of its marine space, looking forward to 2038. The vision for the plan will be achieved through a series of 12 high level objectives which have associated policies (53 in total) which have been specifically drafted if legislation doesn’t already exist to meet a particular objective. Each policy is situated within the objective it is most related to. Policies can be applied to the whole of the plan area, or just the inshore or offshore or to defined areas. Further detail can be found in the Technical Annex or via the Marine Information System. The objectives take into account the findings of the South Plan Analytical Report (SPAR) consultation with government, local authorities and other stakeholders and local and national planning documents. Unlike the East Marine Plans, the objectives of the South Marine Plans are cross cutting rather than specific to individual topics and sectors.

The table below summarises the high level objectives of the South Inshore and South Offshore Marine Plan: 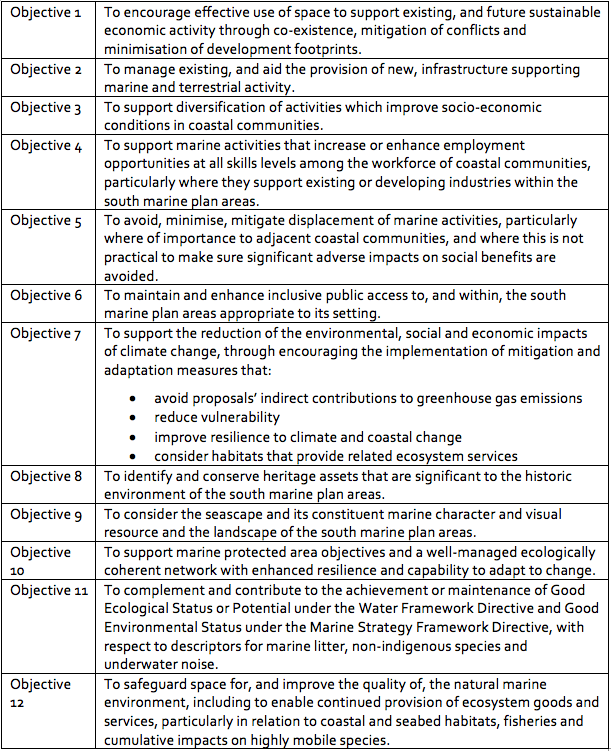 Involvement of stakeholders, government officials across all relevant departments including those relating to retained functions e.g. defence, local and other authorities and representatives of bordering nations has been central to the development of the plan. All stages of preparing the South Marine Plan have been supported by ongoing formal and informal public consultation and engagement. Details of the engagement approach and activities are set out in the Statement of Public Participation.

The following assessments were undertaken as part of the South Marine Plan’s preparation:

Reports produced during the different planning stages highlighted in Figure 1 above can provide more detail and technical information. All of these reports are available below:

The South Inshore and Offshore Plans were combined into the second English marine plan to be adopted. It covers an area of around 20,000 square kilometres of inshore and offshore waters across 1,000 kilometres of coastline from Folkestone to the river Dart. The South Inshore Marine plan area cover the area from the mean high water spring tide out to 12 nautical miles. The area includes the UNESCO world heritage Jurassic coast and contains a diverse range of habitats and species.  The South Offshore Plan area covers the area from 12 nautical miles to the maritime borders with France and the Channel Islands, totalling approximately 10,000sq km. 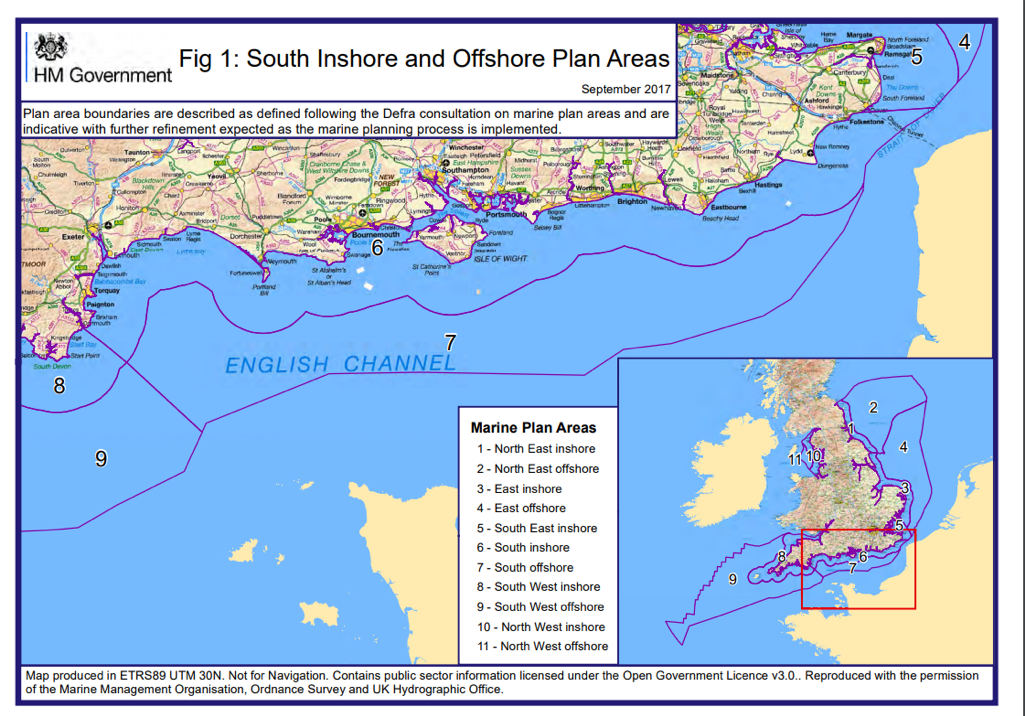 All reports are available online at:

There are lessons to be learnt from the process undertaken by the MMO which will be relevant in other contexts, noting the differences (e.g. governance, resources, primary issues, etc.).

The South Offshore Plan shares a border with France and the Channel Islands and therefore will be relevant to the management of transboundary issues.