Reviewing and mapping fisheries restricted areas in the Aegean Sea

In the framework of Protomedea and Marisca projects, a study aiming to map and categorize Fisheries Restricted Areas (FRAs) in the Aegean Sea was conducted. Results of the study were published in Mediterranean Marine Science. FRAs were identified through the analysis of national legislation on fisheries, environmental protection, preservation of underwater archaeological sites and maritime activities, implying different types of spatial-temporal restrictions of fishing activities. Moreover, spatial-temporal restrictions established by the EU and the General Fisheries Commission for the Mediterranean (GFCM) were also reviewed. Collected information was organised in a database, including both spatial and non-spatial information on the identified FRAs.

Fisheries Restricted Areas (FRAs) are geographically-defined areas in which all or certain fishing activities are temporally or permanently banned or restricted, in order to improve the conservation and sustainable exploitation of living aquatic resources and the protection of marine ecosystems. This practice is extracted from a study whose results have been published in the Mediterranean Marine Science journal, focusing on FRAs in place in the Aegean Sea (Greece), taking into account their spatial allocation and specific characteristics (type of restrictions, legal instruments to support their regulation and management framework). The study results contributed to the projects: (i) “PROTOMEDEA - Towards the establishment of marine protected area networks in the Eastern Mediterranean”, and (ii) “MARISCA – Maritime spatial planning for the protection and conservation of the biodiversity in the Aegean sea”.

The overall objective of this study was to identify and map the current distribution of spatial-temporal restrictions of fishing activities in the Aegean Sea (Greece), and to provide science-based documentation for fisheries policy research, decision making, as well as monitoring, control and enforcement. In addition, the national fisheries legal framework concerning these restrictions was critically examined, and its weaknesses were identified and discussed.

The study focuses on the GFCM (General Fisheries Commission for the Mediterranean) Geographic Sub-Areas (GSAs) “22-Aegean Sea” and “23-Crete” as well as on a part (2,336 km2) of GSA “24-North Levantine”. Both Greek territorial and international waters are included in the study area.

Identification of nationally established FRAs (nFRAs) was performed through a systematic review of the national fisheries legal framework concerning spatial-temporal restrictions of fishing activities in territorial and international waters. Greek national legislations imposing fishery restrictions were also analysed in relation to designated archaeological sites, areas for nature protection (MPAs) and areas with special regulation under maritime legislation (i.e. ports, beaches, underwater cable/pipe areas, etc.). The FRAs established by the European Union (eu-FRAs) were identified by reviewing EU fisheries legislation. Identification of the FRAs established by international fisheries organizations (intFRAs) and specifically by the Regional Fisheries Management Organization (RFMO) GFCM was based on the information provided by the Compendium of Decisions of the GFCM (GFCM Decision Compendium, 2016). Only provisions in force (as determined by competent authorities) were included in the analysis.

A database of identified FRAs was then created in Excel, containing detailed information for each area. FRAs were classified according to:

The spatial information for each FRA was structured in a GIS. Polygons in shapefile format for each FRA were created using the information obtained from the relevant legal acts. Insufficient information on FRAs delimitation was supplemented from other sources, as: contribution of the competent authorities, grey literature, supplementary material (e.g. navigation maps or travel maps, etc.).

A wide legal framework concerning the establishment of spatial-temporal restrictions of fishing activities for various purposes was collected and analysed in the study area:

The review of the spatial-temporal restrictions of fishing activities in the study area, revealed a total of 521 FRAs: 511 nFRAs (253 nfFRAs, 1 nifFRA, 21 neFRAs, 85 naFRAs and 151 nmFRAs), 6 euFRAs and 4 intFRAs. For each FRA, a wealth of detailed information was compiled and summarized in a table. 516 out of the 521 identified FRAs were mapped as polygons in shapefile format; due to lack of accurate spatial information it was not possible to map remaining 5 FRAs. 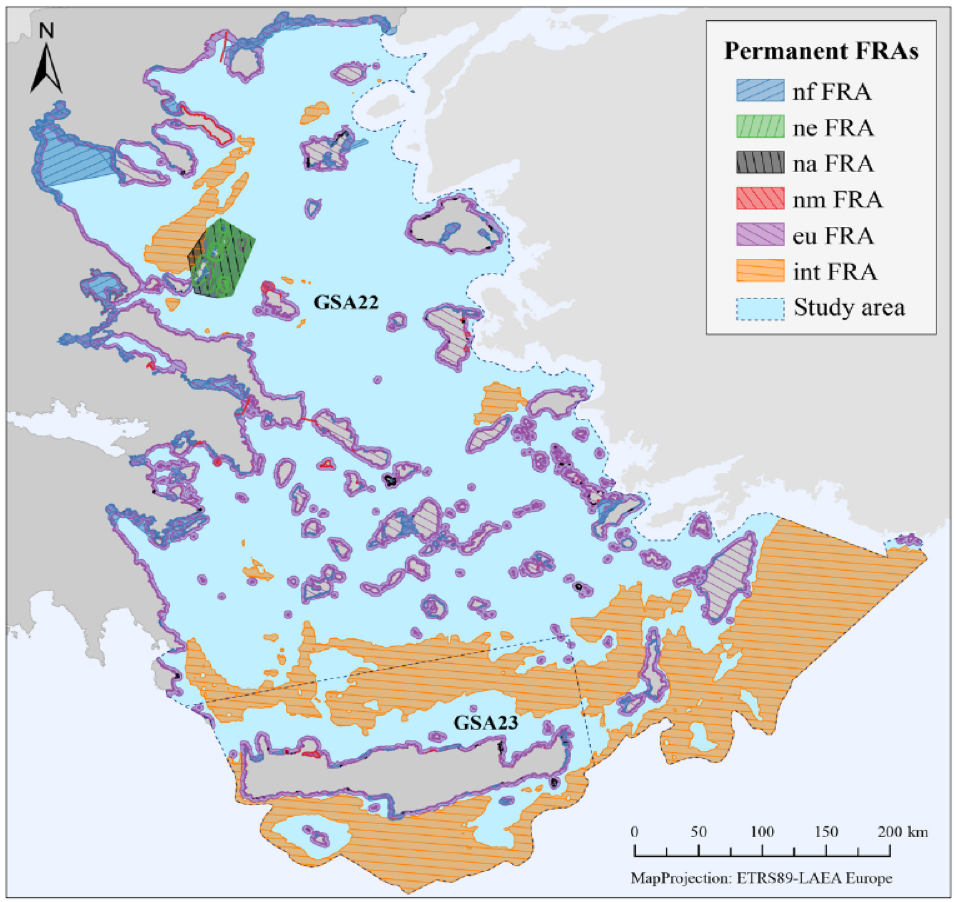 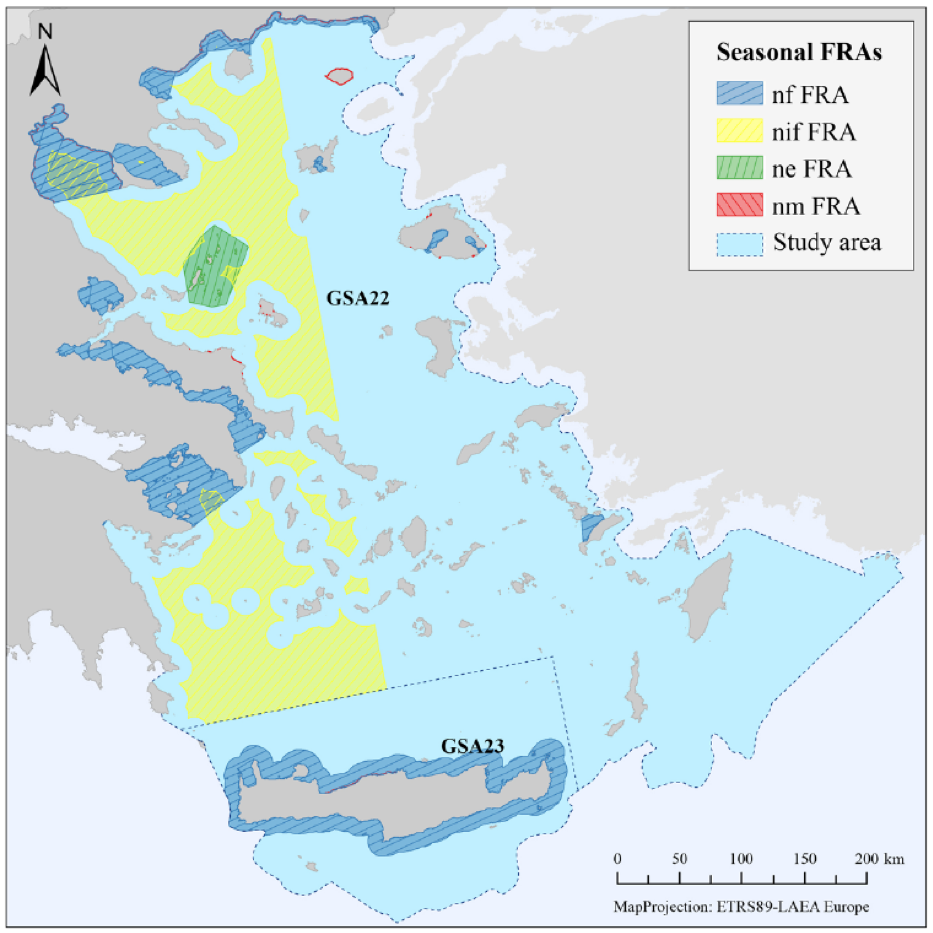 The analysis of collected information showed that:

Following remarks are discussed in the paper on FRAs in the Aegean Sea:

The methodology used to categorize the different FRAs typology according to a number of attributes can be transferred to other marine areas. The database created through this study can be further expanded with new information and can contribute to populating databases covering a larger scale (e.g. the entire Mediterranean basin scale).

The study represents a contribution to the Greek national evaluation of the effectiveness of spatial-temporal restrictions in the Aegean Sea necessary to support the framework of the Common Fisheries Policy, and for an efficient management of marine space, in accordance with the principles of Maritime Spatial Planning and adaptive management.

Department of Marine Sciences, University of the Aegean

Department of Marine Sciences, University of the Aegean

The study is a contribution to the Research Projects “PROTOMEDEA- Towards the establishment of Marine Protected Area Networks in the Eastern Mediterranean”, supported by DG for Maritime Affairs and Fisheries of the European Commission, under Grant Agreement SI2.721917 and “MARISCA -ΜΑRItime Spatial planning for the protection and Conservation of the biodiversity in the Aegean sea”, co-funded by the European Environmental Area Financial Mechanism, (EEA FM 2009-2014) and the Public Investments Program (PIP).

Direct costs of this practice elaboration are unknown.