The Alboran Sea is characterized by its rich biodiversity and the need to establish effective conservation measures and define and put in place marine protected areas.

The need to establish a network of marine protected areas in the Alboran Sea, with an integrated and focused on cooperation perspective, comes from "Meetings around the Alboran Sea" held in 2007 and 2009 in Malaga (Spain) and Oujda (Morocco).From this very first experience of cross-border cooperation in the marine and coastal environment emerged the Declaration of Oujda on Conservation and Sustainable Development of the region Alboran Sea and its coastal zone (Oujda, April 18, 2009), which states, among others, a well-defined objective to consolidate the existing network in the marine and coastal protected areas domain; identify and create new protected areas; and restore habitats in order to protect the integrity of the Alboran region and to ensure the sustainability of human activities that take place in it.

As a result of this, in 2011 the Project ALBORAN was launched under the framework of the ETC Programme POCTEFEX.

Among other components, the project focussed on promoting marine protected areas and produced a Report on Marine Protected Areas with the aim to improve the better governance in the Alboran Sea in this field and adapt the Roadmap 2020 for Mediterranean MPA to the specific characteristics and needs of the Alboran Sea.

In the current Mediterranean context, the Alboran Sea is the perfect place to be a pioneer in the implementation of the identified actions and proposals of the Roadmap 2020 for MPAs in the Mediterranean area. One of the added values of the initiative is its participatory approach and integrated scope build on the cooperation between Andalusia / Spain and Morocco (as a starting point that could be added in the future Algeria), the support from international organizations; national institutions from the two shores; and the engagement of local actors in the cities and in the field.

As a document that is prepared under the POCTEFEX-Alboran project, the report contains the contributions made by participants in the working group on MPAs held in Malaga from 19 to 21 June with the participation of more than 50 technicians and experts in the conservation of the Alboran Sea from both sides to analyze the current situation of marine protected areas , cetaceans and sea turtles, integrated coastal zone management and global change in the Alboran Sea.

The output is a Report on the Marine Protected Areas in the Alboran Sea. 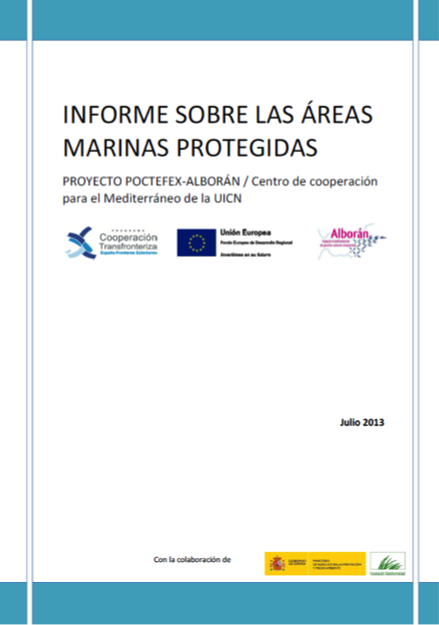 The document includes an extensive description about the existing governance mechanisms and other EU and international instruments and how they could be used to contribute to promote and protect a MPA in the Alboran Sea. It also contains an analysis of the cooperation initiatives in place in the Alboran Sea. Finally, and based on the analysis and conclusions extracted from the Working Group, the document set a series of premises and actions which lays the foundation of the 2020 MPA Roadmap for the Alboran Sea as well as a first identification of the actors and institutions which might need to play a role in the definition and implementation of such a Roadmap.

This initiative could turn be of great interest for the European Union, as it would advance the implementation of the subregional marine strategy in this area of the Mediterranean in cooperation with third countries, so that this will ensure the continuity of actions after 2020, avoiding the classic development projects once completed remain as mere anecdotes, to return back to the starting position soon. An initiative of this kind also would be able to advance very significantly in the CBD objectives and the Barcelona Convention and propose a model extrapolated to other subregions operation and even other Mediterranean seas.

Funding Source: the initiative was developed within the ALBORAN project, funded by POCTEFEX program (ERDF funds) which has a total budget of 1.425.240,68 euros.