This set of practical information describes the experience of the Baltic Environmental Forum in testing how maritime spatial planning could be carried out in Latvia and thus developing a basis for the process and potential structure of a national maritime spatial plan in future. The pilot plan was developed with substantial stakeholder involvement and inputs from all relevant actors. It does not only set a sample for the national maritime spatial planning process to be launched in 2014 in Latvia, but should also be seen as a good practice for an MSP process to be launched elsewhere.

The Pilot MSP for the Western Coast of Latvia was developed within the context of BaltSeaPlan (2009-2012). The Baltic Environmental Forum –Latvia (BEF-LV), which represented Latvia in the BaltSeaPlan project, led the process that tested how MSP could be carried out in Latvia.

The official planning process in Latvia led by the Ministry of Environmental Protection and Regional Development (MoEPRD) was initiated in 2014. The approval of the national MSP is expected in 2017. As the Pilot MSP for the Western Coast of Latvia covers more than 70% of the Latvian territorial waters and Exclusive Economic Zone, it forms the basis for the national MSP in terms of both process and structure.

The pilot plan covers an an area of about 20.070 km2 that includes the territorial sea of Latvia from the Latvian ‐ Lithuanian border up to Cape Ovīšrags and the entire adjacent Exclusive Economic Zone of Latvia. It was selected as an area that represents all existing sea uses (fishery, shipping and ports, military, MPAs, etc.), as well as emerging ones (energy, water tourism, etc.). 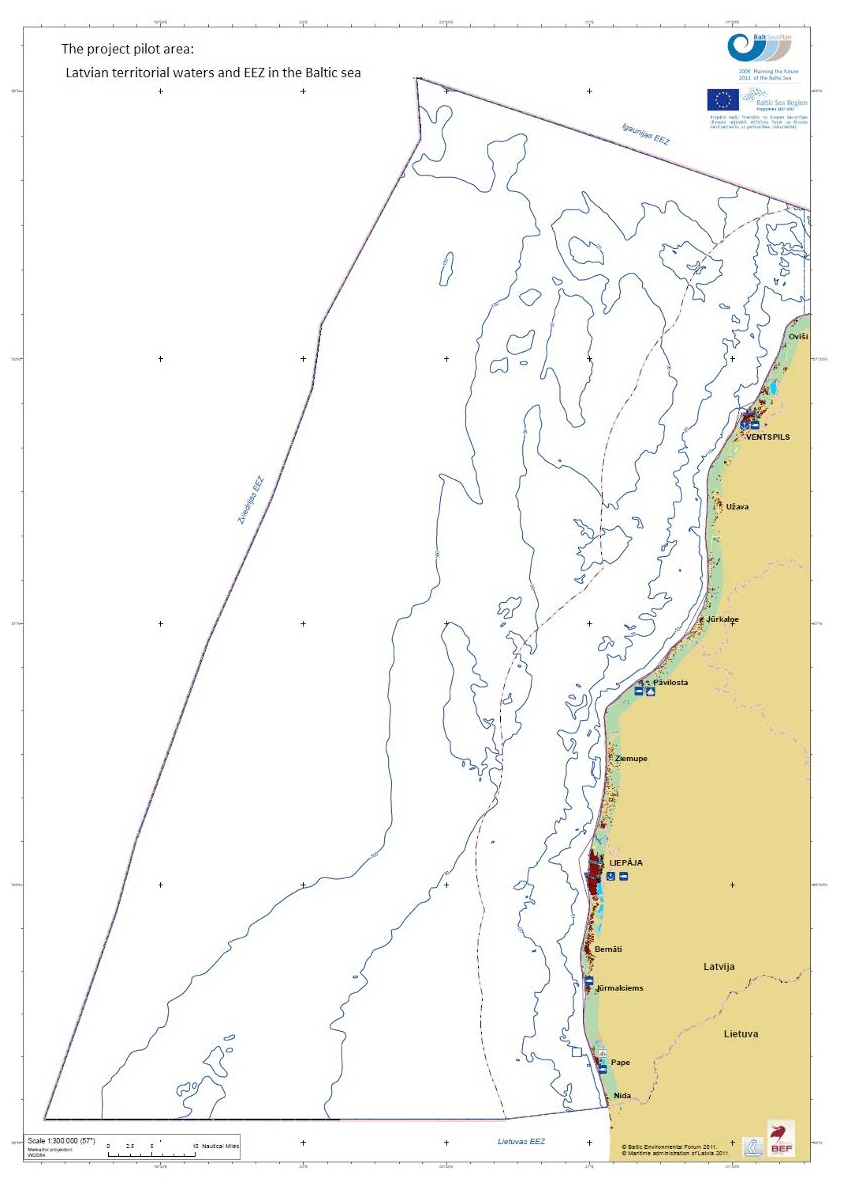 The pilot MSP was built on the experience of previous international projects and on the project partner’s knowledge and recommendations, adjusted to meet local conditions and needs. The pilot area was selected in co-operation with the competent authorities and the process was organised in accordance with the scheme used in all BaltSeaPlan pilot plans. Senior BEF-LV experts on marine and water management issues led the development of the plan and prepared the zoning map. The Hydropgraphic Service of the Maritime Administration of Latvia provided most of the maritime data and developed the GIS database and maps for the pilot plan. External experts and stakeholders had significant input in stocktaking and by commenting on the draft plan.

The pilot MSP for the Western coast of Latvia is a strategic planning document, which aims at defining directions for balanced use of marine space by setting priorities for certain uses within certain areas. The specific objectives for the pilot plan are:

There are four different zoning categories determined in the plan: It was decided early on that the development of the pilot MSP would be organised as a participatory process with strong involvement of all stakeholders. In order to ensure transparency and that everyone has a chance to participate in the project, all relevant workshops and meetings were announced on the website of the Baltic Environmental Forum – Latvia and the Ministry of Environmental Protection and Regional Development.

Stakeholders were identified and invited to participate in the process based on their present as well as potential future role in MSP. The interest groups identified were: policy and decision makers on national, regional and local level, main sea users representing economy sectors (fisheries, ports and shipping, tourism, wind farms, oil extraction) through associations, potential sea users, local coastal municipalities and their union, environmental NGOs and scientists and scientific institutions working on marine issues.

No transboundary consultation took place during the development of the pilot MSP for the Western Coast of Latvia.