A new approach to assess marine opportunity costs and monetary values-in-use for spatial planning and conservation; the case study of Gulf of Naples, Mediterranean Sea, Italy

The methodology described in the paper published in 2018 in Ocean & Coastal Management allows for the estimation of the monetary value of marine space related to various maritime activities occurring in a specific area. Its results can help marine planners to recognize zones with higher socio-economic importance and consequently adapt the zonation process in order to fulfil conservation objectives. The methodology was tested in the Gulf of Naples.

This methodology was developed as part of a Ph.D. thesis carried out between 2013 and 2015 by the main author of the paper published in Ocean & Coastal Management.

The main objective of the proposed methodology is to estimate the monetary value of marine space in relation to the maritime activities occurring in a specific area. Specifically, the methodology provides an estimate of the profit gained in a selected study area by each single maritime activity as well as by the group of all maritime activities occurring in the area. The methodology calculates the monetary value of a marine space at a resolution of 10 hectares. The results are intended to support the implementation of a zoning process which could safeguard the socio-economic needs of local communities while achieving conservation priorities for the preservation of marine ecosystems integrity.

Algorithms to estimate the monetary values of the principal maritime activities (large-scale and small-scale fisheries, aquaculture, beach resorts, yachting, diving and commercial shipping) have been developed and applied in the Gulf of Naples (centre Tyrrhenian sea, Italy). These algorithms are based on different sources of data (questionnaires, monitoring activities, official local authority reports, web and scientific literature). They can be compared as their outputs are all expressed in the same measurement unit. The algorithms developed were integrated in a single new flexible approach, called “Systematic Costs Assessment” (SCA), to assess opportunity costs in systematic conservation planning which was applied in the study area. The SCA was applied through the following steps: 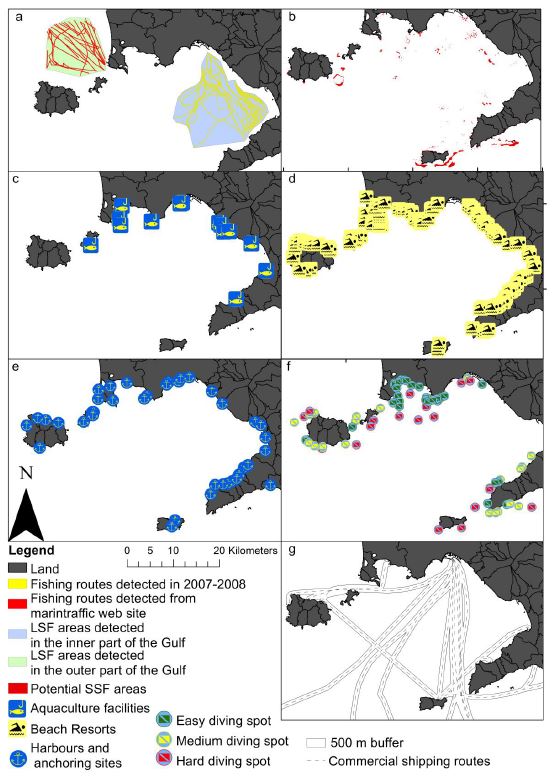 The main results obtained for the study area are:

The analysis also highlighted that small scale fishery is the most important activity in the study area in terms of monetary value generated. The integrated monetary values of all CUs (taking into account the contribution of all maritime activities occurring in the CU) were spatially illustrated on a map, highlighting areas of greater economic value. 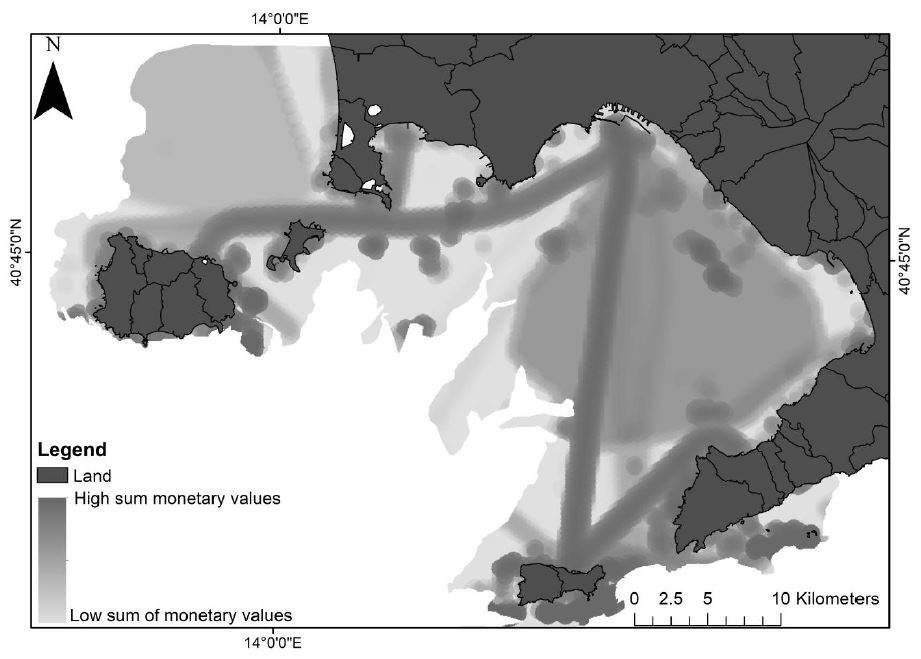 In principle, the methodology could be applied in other marine areas. However, as the study specifically dealt with the area of the Gulf of Naples, transfer of the methodology would require some adaptation to local socio-economic and environmental conditions.

The reliability of the application of the proposed methodology to other contexts is largely improved if the algorithm developers also have a clear knowledge of the main economic activities of the studied area and their specific problematics. Previous efforts on research and exchange of information with local stakeholders are considered highly relevant for the effective application of the methodology and the production of reliable results.

The results of the study could support MSP in the Gulf of Naples, highlighting areas of greater economic value.

The methodology described in the paper published in Ocean & Coastal Management, is based on the work carried out by the first author during his Ph.D., which was financially supported by the Italian Ministry of Education, University and Research (MIUR) and the National Inter-Universities Consortium for the Marine Science (CoNISMa).