The Marine Policy Statement (MSP, 2011) states that, when developing marine plans, visual, cultural, historical and archaeological impacts should be considered for all coastal areas and also that any wider social and econmoic aspects of developments or activity on coastal landscaprs of seascapes should be considered, taking into consideration existing character and quality. The National Seascape Character Assessment for England presented as 4 separate reports and a combined seascape Geographical Information System (GIS) data layer. These reports follow two previous assessments under taken for the south and east inshore and offshore marine plan areas undertaken in 2014 and 2015 respectively.

The objectives of this project were:

The first stage involved gathering and assimilating the range of datasets, literature, plans and strategies available to inform the work. The majority of the required spatial data was provided by the MMO, organised in a GIS database structured according to the key themes of the ‘seascape wheel’, (Natural England, 2012). See Figure 1. 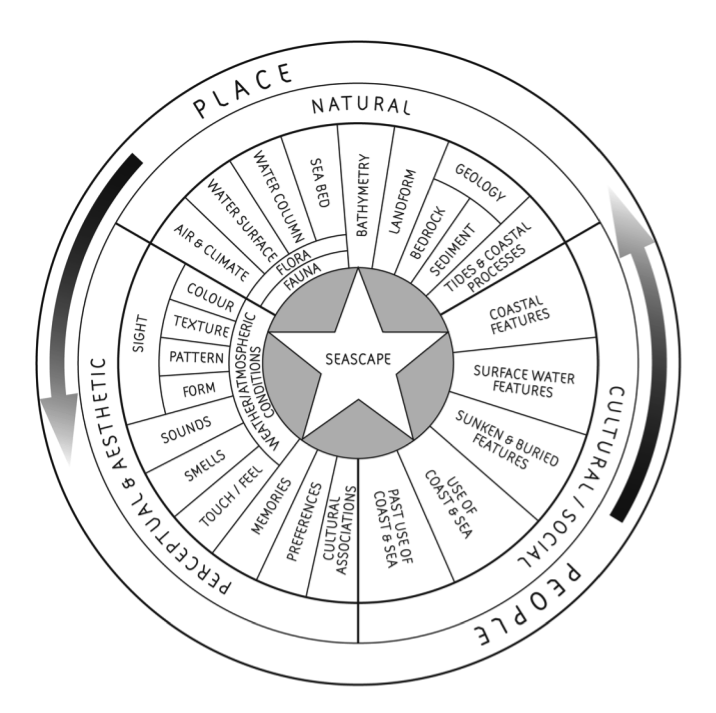 The second stage of the process was to interrogate the date relating to different aspects of the seascape wheel and identify patterns relevant to the character across each of the inshore and offshore areas being investigated. This process informed the identification of MCA’s (Marine Character Areas) as well as making spatial links with adjacent MCA’s in order to create seamless boundaries not constrained by the location of different marine plan areas or administrative jurisdictions. Descriptive profiles were developed for each identified MCA and links were made to more local scale seascape character assessments were appropriate in all four regions.

An approach to visual resource mapping (VRM) was developed as part of the 2014 Seascape Assessment for the South marine plan areas. This has subsequently been applied to all other marine plan areas in England including the 4 areas included in this project. Details of this methodology can be found in Section 3 of the above report.

Consultants LUC were commissioned in 2018 to undertake stakeholder verification on the draft seascape character assessments across all four marine plan areas. Two stakeholder workshops were held in the North West, North East and South West and one held in the South East. Workshop attendees were given introductory presentation from the MMO on how seascape evidence is feeding into the marine planning process followed by an overview of seascape work prepared to-date. Discussions were facilitated to verify the MCA names, boundaries and key characteristics for consideration. Participants were also invited to provide further comments via email.

The responses made at the workshops and submitted by email were considered as part of an update to the MCA profiles .Comments on MCA names and boundaries fed into the process of creating the national seascape character map and combined GIS layer produced for all marine plan areas in England

The final step was the creation of a single combined GIS layer and map of MCAs covering all of England’s inshore and offshore waters, replacing previously available separate datasets for individual marine plan areas. This is the first time character has been mapped across all areas. Using GIS, the National Marine Character Area layer for England was created by merging the individual datasets produced for the north west, north east, east, south east, south and south west marine plan areas. Areas which overlap at either end of these individual datasets were merged or amended to reflect stakeholder comments on names and boundaries, and desk-based interpretation of characteristics and features from available data and information.

A national seascape character map for England. This map is available via the MMO’s online Marine Information System (MIS)

The methodology for the National Seascape Assessment could be used as a template to conduct a similar SCA in other areas.