This MSP exercise in the Southern Adriatic - Northern Ionian area was implemented in the context of the ADRIPLAN project (ADRiatic Ionian maritime spatial PLANning). ADRIPLAN has the overall objective to analyse and promote transboundary MSP in the Adriatic and Ionian region, a Mediterranean area bordered by many states and crowded by multiple uses of the sea and valuable ecosystems to protect. Other studies and projects already showed the great potential for MSP in the area (e.g. Plancoast; SHAPE; Policy Research Corporation’s study, 2011). The ADRIPLAN project developed proposals and recommendations for an operational cross-border MSP process in the region. In addition, ADRIPLAN aimed at promoting the harmonized implementation of the EU Strategy for the Adriatic and Ionian region (EUSAIR). The ADRIPLAN project was implemented by 17 Partners from 4 EU countries of the Adriatic and Ionian region, including: 8 scientific partners and 9 institutional partners. 17 observers also contributed to the project.

This is a MSP exercise, not legally binding.

The ADRIPLAN project aimed at improving the on-going process to develop MSP in the Adriatic and Ionian region, to overcoming barriers of full participation of all neighbouring countries in the process and promoting sound technically/scientifically based political decisions in order to achieve a coherent transnational approach to the spatial planning of the marine seas

ADRIPLAN study area is the Adriatic and Ionian region considered as a whole, zooming into two focus areas, one in the Northern Adriatic Sea and the other in Southern Adriatic - Northern Ionian area (referring to the present practice). 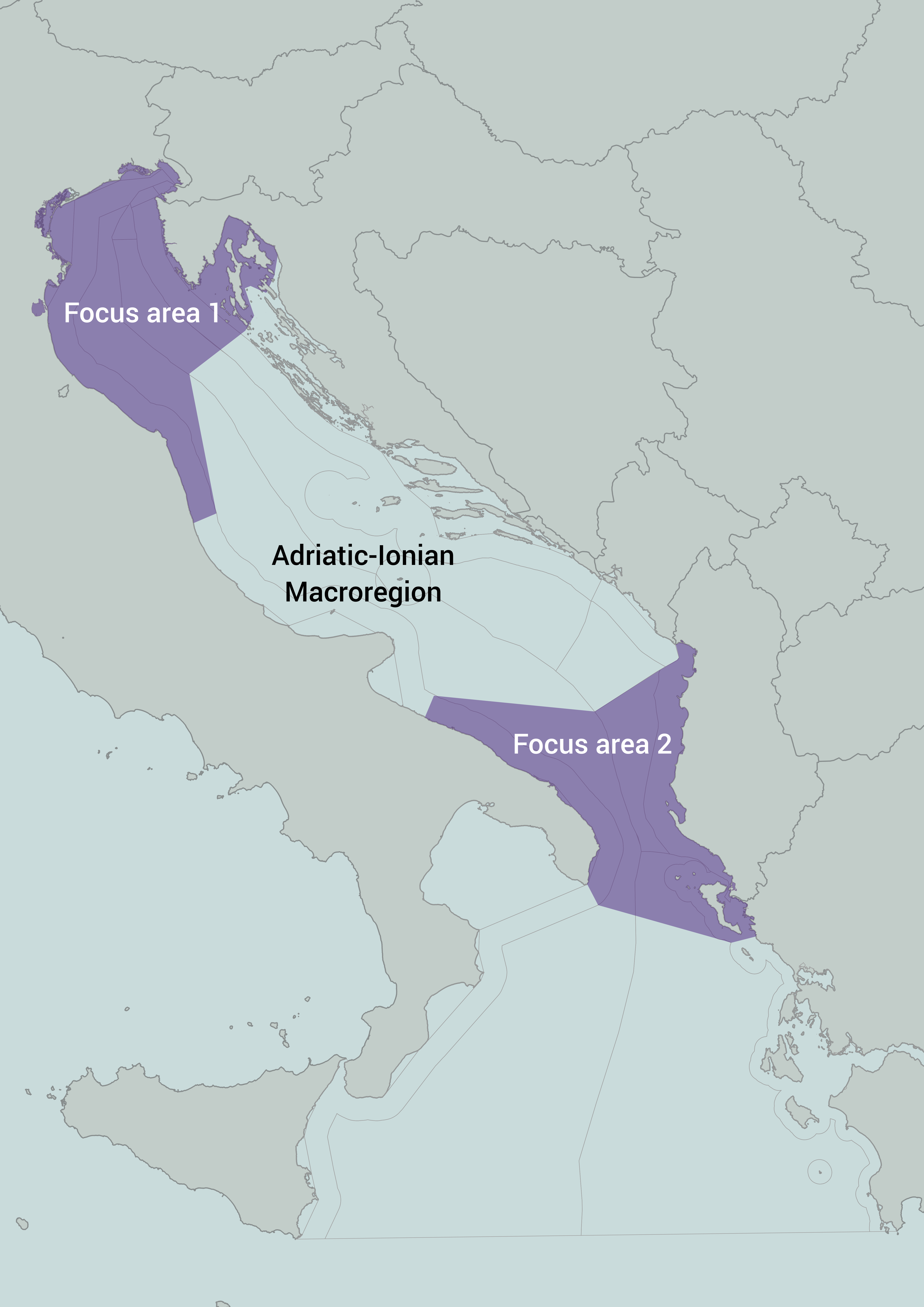 The MSP exercise was developed as part of the ADRIPLAN project, funded by DG MARE. The project ran from December 2013 to July 2015.

For the purposes of MSP exercise in Focus Area 2, four relevant planning issues were selected:

Relating to this issue, the following targets were considered in the MSP exercise: 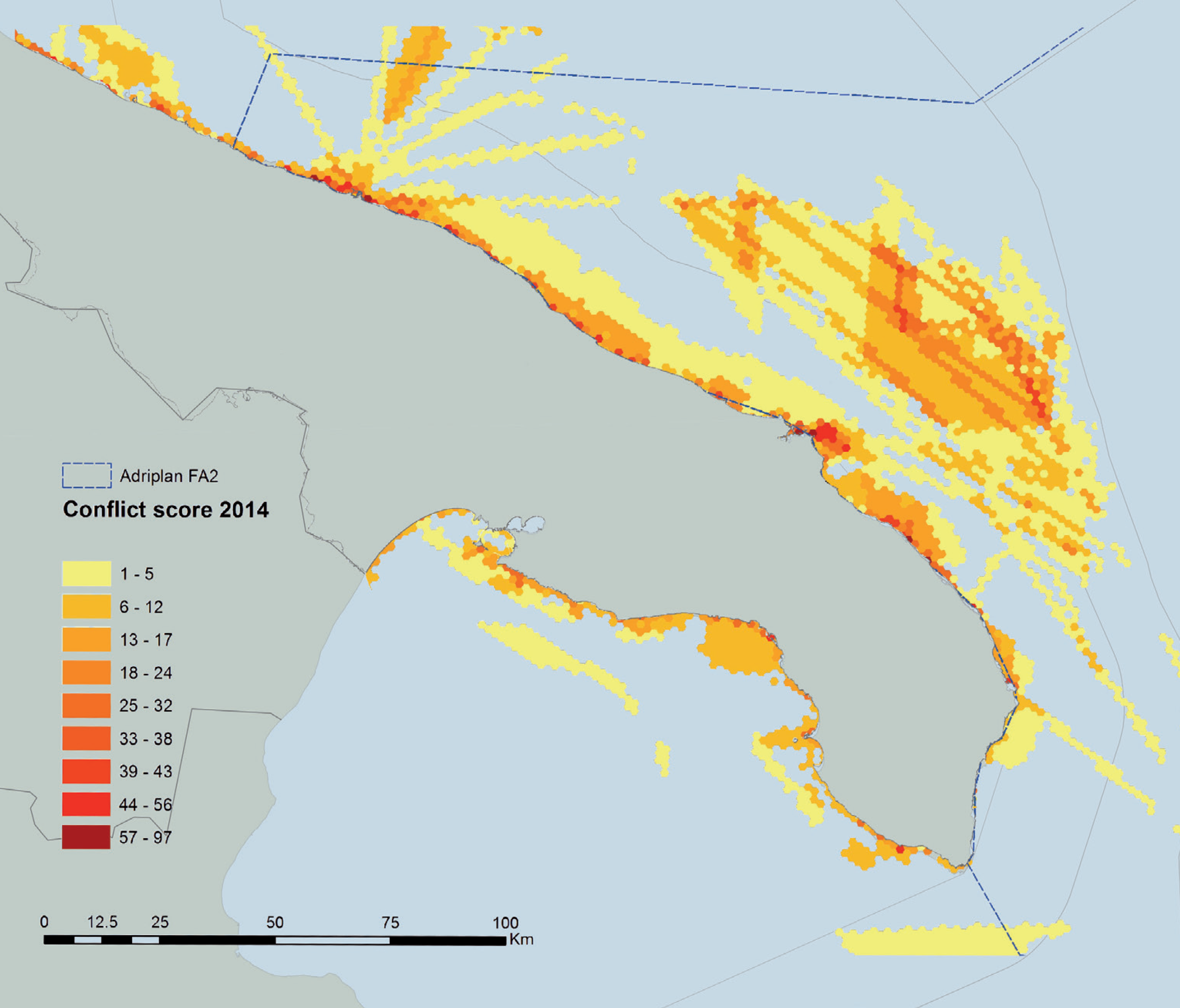 In the Apulian part of Focus Area 2, apart from the existing activities, conflicts with energy infrastructures can be boosted in the next years. The new area of conflict emerging is due to the planned Trans Adriatic Pipeline reaching the Apulian coast slightly north of the city of Otranto. Moreover, hydrocarbon exploration authorisations are heavily increasing along the whole Apulian coast. Conflicts with energy infrastructures can be merely spatial (e.g. spatial limitations for trawling due to pipelines) or can have greater implications. In fact, recent pressure for surveys for oil and gas using acoustic technologies is considered an area of heavy conflict with fisheries, since technologies such as air guns may have serious impacts on different ecosystem components, especially on fish stocks. Specific measures were not identified by the MSP excercise ran within ADRIPLAN. 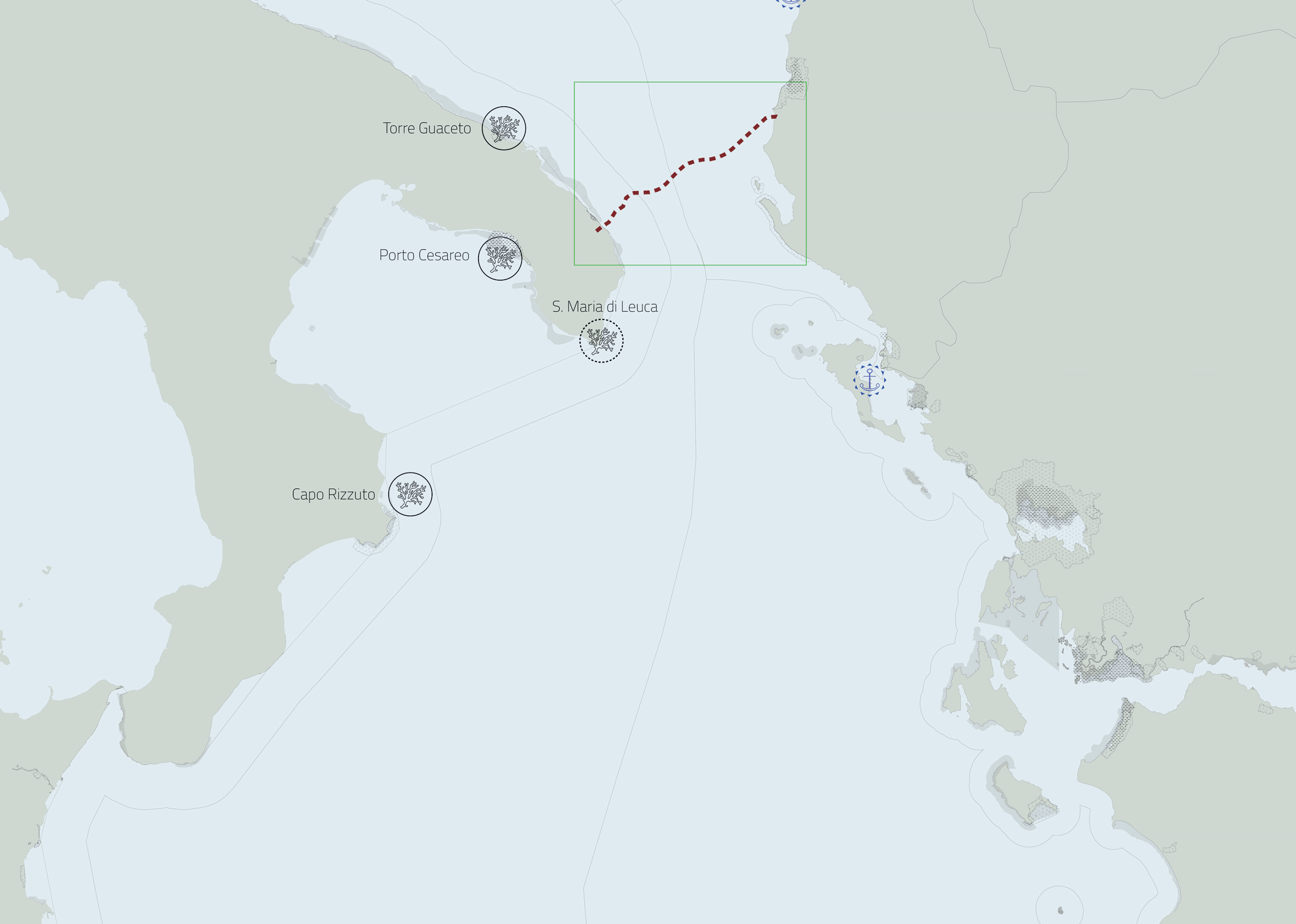 Cumulative impact assessment pointed out a great overlapping between activities and ecosystem components, with a rather high impact, particularly in coastal areas. In the scenario of future developments the entire area is exposed to heavier pressure on ecosystem components

It was concluded that the entire area and especially the Diapontia islands complex need an effective spatial management plan not only to minimize the possibilities of further deterioration of the status of the ecosystem but even to improve existing conditions. Specific measures were not identified by the MSP excercise ran within ADRIPLAN. 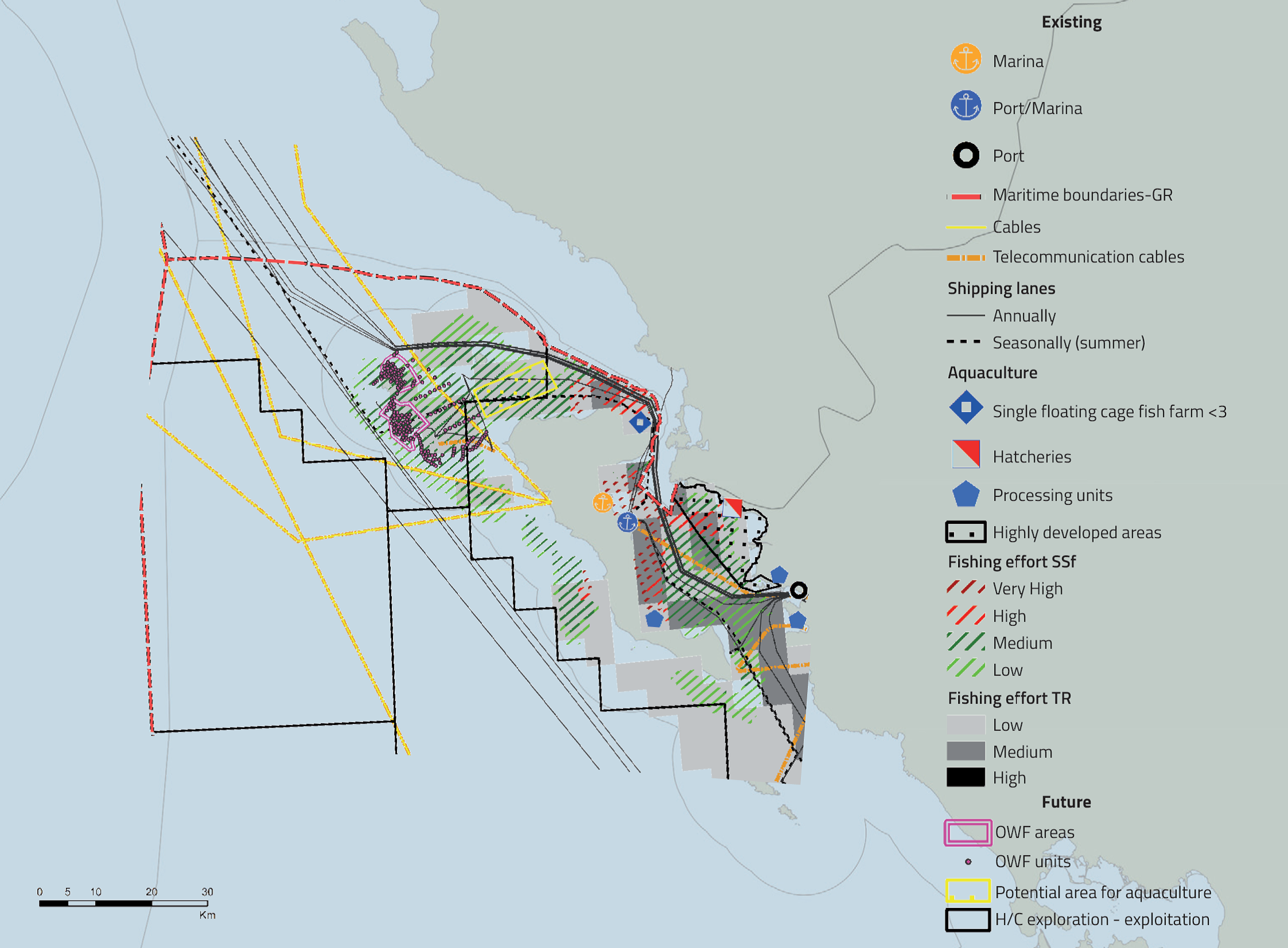 Issue 4- Cross-border cooperation measures between Greece, Albania and Italy for fishery and aquaculture in the south-eastern part of Focus Area 2

Greece has already a well-developed aquaculture activity and the highest production in the Adriatic and Ionian region. A number of units are placed in the Greek Ionian Sea, few of which are close to the transnational waters with Albania. This latter country has a rather limited development of aquaculture, but substantial progress has been made in recent years, particularly in the southern part, close to the Greek border. A precise designation of the cross-border AZA (allocation zone for aquaculture) between Greece and Albania is needed and development of cross-border collaboration urges for bi­lateral policy agreements between the two countries.

As far as fishery is concerned, specific areas lying in international waters or within Greek waters where cross-border management of fishing is needed have been identified through workshops held in Greece and in Italy. Need to stop illegal fishing activities in Greek waters was pointed out.

As pilot MSP exercise, Strategic Environmental Assessment was not applied.

Within ADRIPLAN the measures related with Focus Area 2 were discussed in an informal context. This project organized stakeholder participation to MSP exercises. Stakeholders’ workshops were hold in Corfu (Greece) on 27 June 2014 and Lecce (Italy) on 11 March 2015. Details on workshops results are available on ADRIPLAN web site (http://adriplan.eu/index.php/stakeholders/stakeholder-workshops).

Some transboundary issues were considered in ADRIPLAN project in a separate analysis focused on fishery, that was addressed by stakeholder workshops held in Corfu (Greece) and Lecce (Italy). Moreover, existing conflicts among Greek, Italian and Albanian fleets in international and Greek waters emerged as elements to be solved (see issue 4 under “Designated uses” section).

The practice was elaborated under the Project Adriplan (http://adriplan.eu/) co-financed by the European Union (DG MARE). Direct costs of ist elaboration are unknown.