Maritime Spatial Plan for the German EEZ in the Baltic Sea

In order to coordinate the growing conflict of maritime uses, in particular between developing and space intensive offshore wind farms and marine environmental protection goals as well as traditional maritime uses such as shipping and fisheries, an integrative and sustainable approach is needed for the development of the German Exclusive Economic Zone (EEZ). The plan is based on time targets and principles of spatial planning in the EEZ regarding economic and scientific uses, ensuring the safety and efficiency of navigation, as well as protection of the marine environment.

The Spatial Plan formulates guidelines for spatial development, sets targets and principles, especially areas, for functions and uses. For the German EEZ in the Baltic Sea the Spatial Plan contains provisions aimed at coordinating the individual uses and functions of shipping, the exploitation of resources, laying of pipelines and submarine cables, scientific marine research, wind power production, fisheries and mariculture, as well as protection of the marine environment.

The legal ordinance on Spatial Planning in the German Exclusive Economic Zone in the Baltic Sea(AWZ Baltic Sea-ROV).

of December 10st 2009 allowed BSH to work on the targets and principles of spatial planning for the German Exclusive Economic Zone in the Baltic Sea, with regard to its economic and scientific use, with regard to safety and efficiency of maritime traffic as well as for the protection of the marine environment, are being determined as a Spatial Plan, comprising text and map.

The German part of the EEZ in the Baltic Sea.

The Spatial Plan itself is the written result of the process as described. Concrete spatial results can be found in chapter 6 of the plan. It contains the coordinates concerning the regulations for shipping, windmill parks, scientific research and cables, and includes maps with transnational pipelines and cables in the Baltic Sea region.

A map has been developed providing an overview of the main designations. 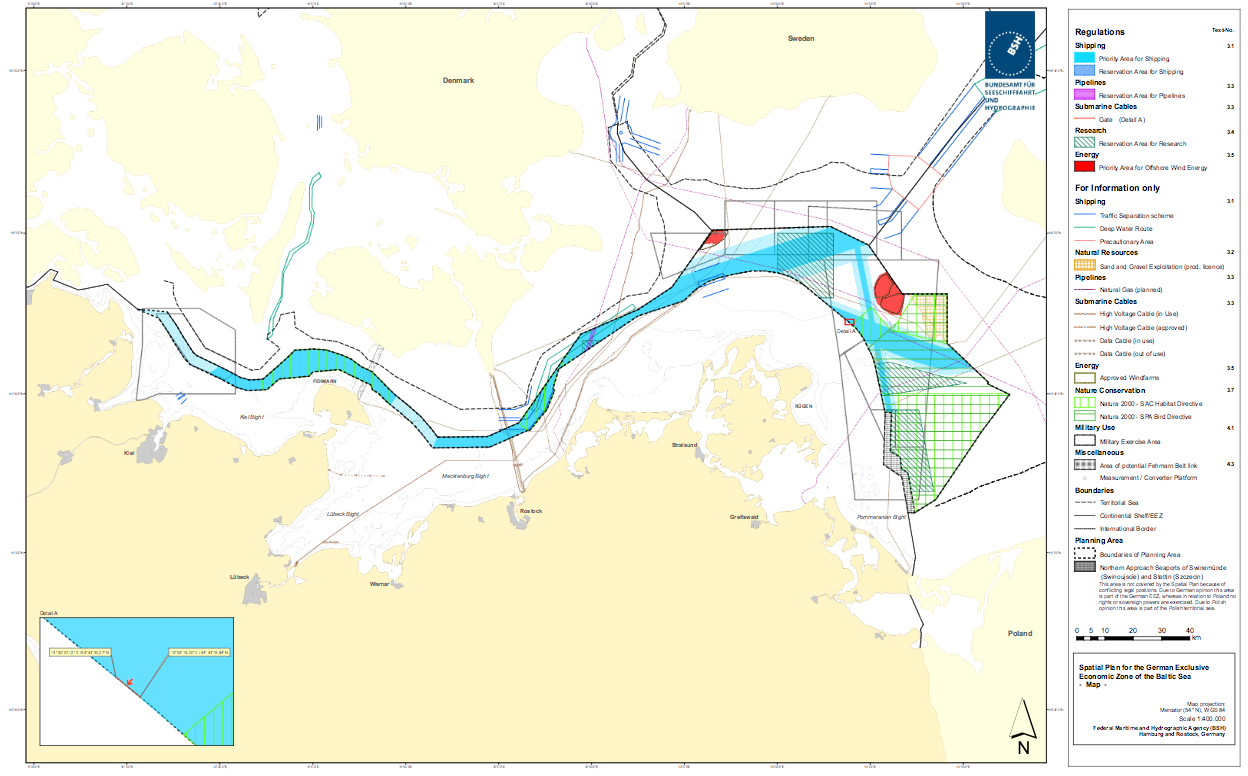 The plan sets binding rules and regulations for authorities, mainly with regard to licensing procedures and approval of projects.

A public hearing on the draft plan with ca. 80 stakeholders attending -mainly from other planning authorities, industry and NGOs – was held in Rostock in late 2008.

Consultations with neighbouring countries were conducted by