The study analyses the national regulatory frameworks for MPAs in the Celtic Seas. It investigated the existing frameworks for marine conservation present in the Celtic Seas countries (France, Ireland and United Kingdom) and the differences between them. This report identifies the main categories of MPA deriving from international conventions, EU law and national legislation in the SIMCelt partner countries. An analysis of the links between MPAs and MSP was also covered in of this report.

This study was developed as a part of a series of case studies under the SIMCelt project, which sought to explore how transboundary management for MSP is being undertaken in the Celtic Sea.

The objective of this study was to identify the main categories of MPAs according to international conventions, EU law and national legislation in the SIMCelt partner countries and to describe how these definitions differ. This study also covered an analysis of the links between MPAs and MSP.

This study conducted a literature review which used information from official organisation websites (e.g. United Nations, European Commission and OSPAR), official publications (e.g. National Administrations’ Reports) and scientific literature to investigate the existing framework for marine conservation in the Celtic Seas and the differences between France, Ireland and the United Kingdom.

The structure of the study was the following:
1. Identification of international legal frameworks for marine conservation in the Celtic Seas and International Categories of MPAs (Figure 1),
2. Analysis of national legal frameworks and national categories of MPAs (France, Ireland and UK)
3. Synthesis on the links between MSP and MPAs
4. Conclusions 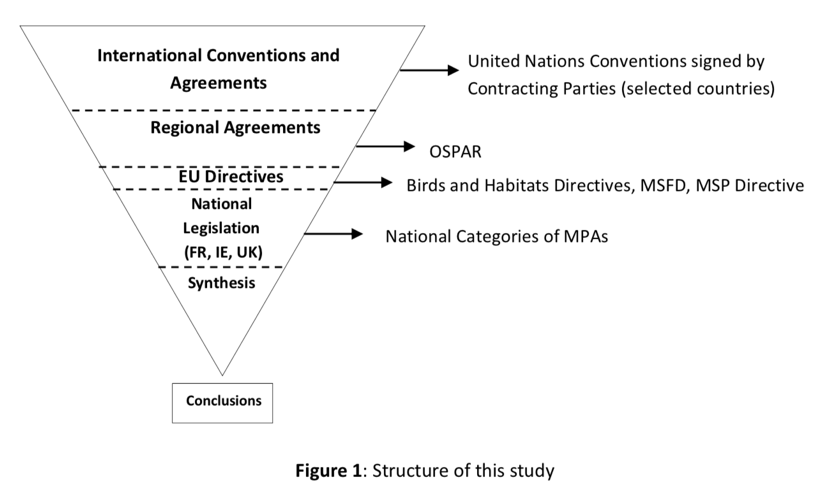 This study gave an overview of the legal basis at an international and national level of analysis for the definition of MPAs. The categories covered by this analysis are the following: 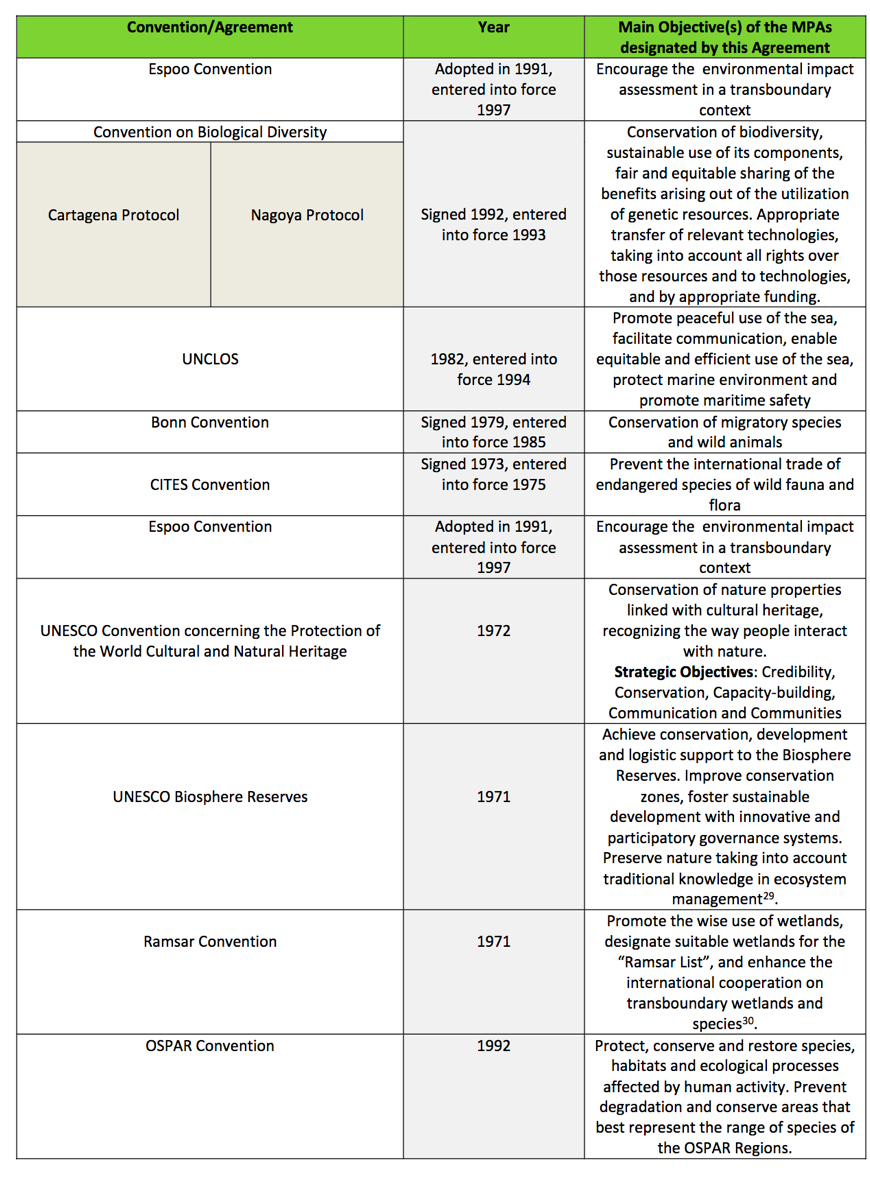 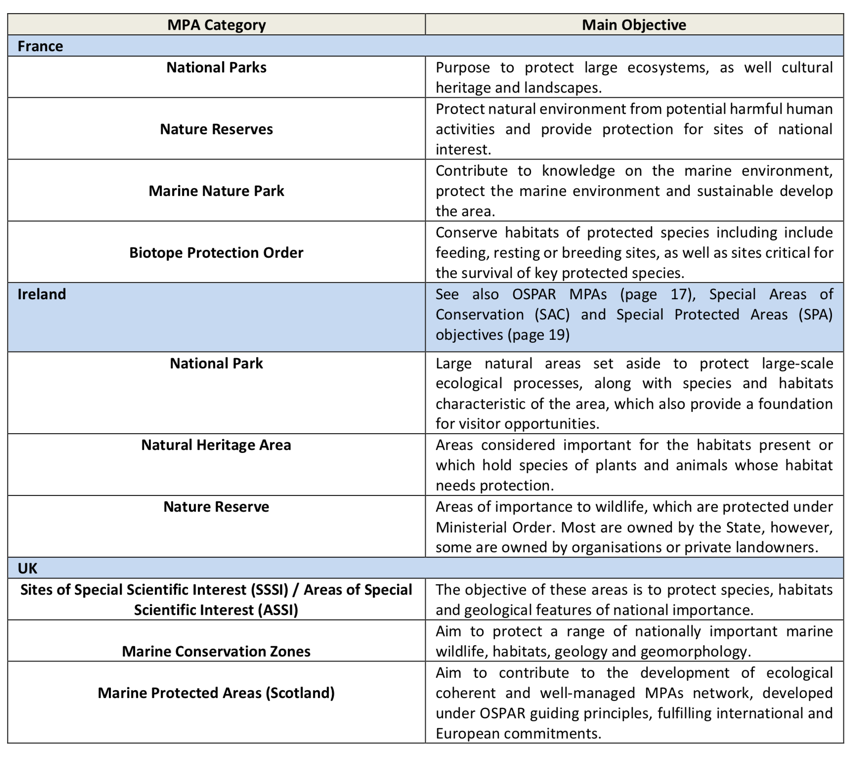 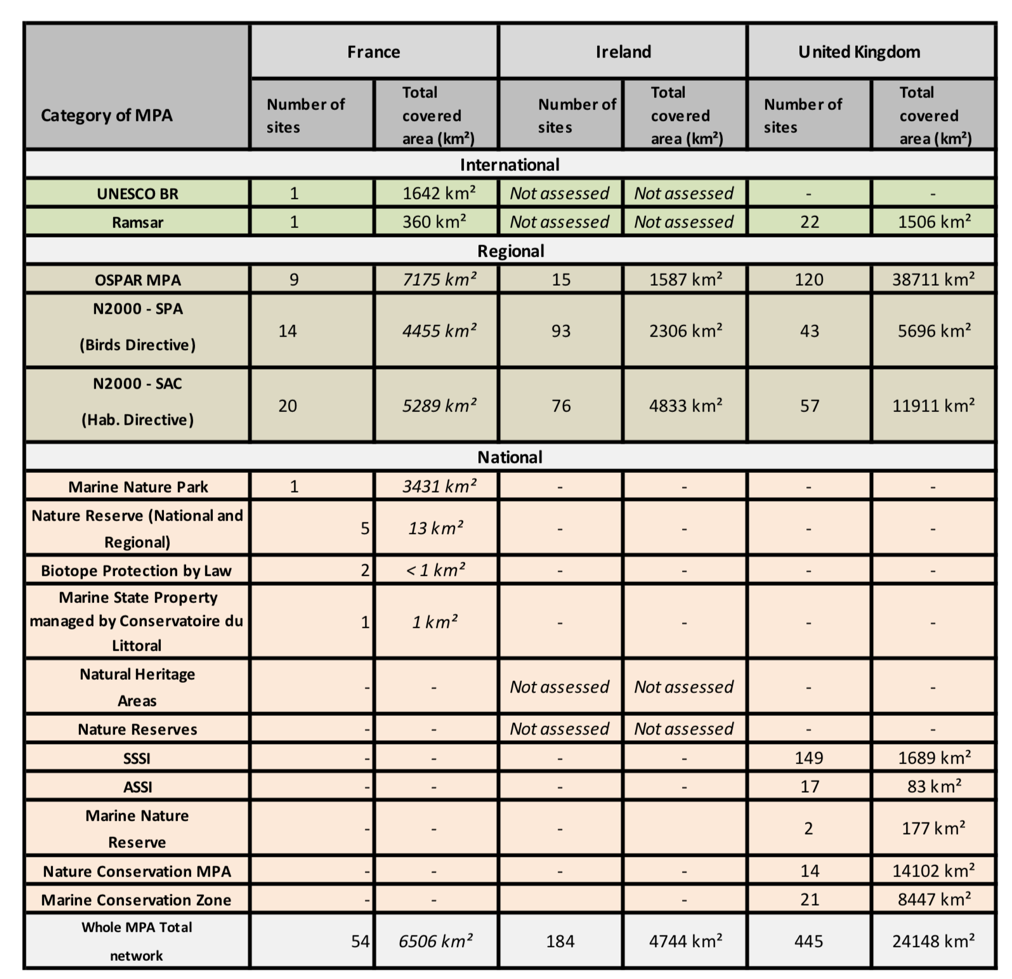 Connection between MSP and marine conservation

The study suggests that MSP can present an opportunity for Member States to address MPA effectiveness. MSP could support the creation of new MPAs by aiding in the identification of network gaps in species or habitat protection and could also support the enforcement of regulations on uses in existing MPAs. Examples are found throughout the study, such as France’s National Strategy for the creation and management of MPAs which is integrated with the National Strategy for the Seas and Coasts. In the UK, a “network oriented” MPA category approach is present.

The findings of the study suggest that MPAs can serve as a spatial measuring tool for the regulation of uses. This is due to the fact that MPAs encompass various conservation methods which can sustain the coexistence of activities and multiple uses of the sea, thereby serving as a spatial management measure which sets rules for maritime sectors.

This approach of looking at MPA designations across multiple levels could be used by other sea basins to understand neighbouring countries’ MPAs and their objectives. This would promote cross-border cooperation in MPA management and MSP.