This orientation plan sets out the broad goals and objectives for the MedPAN network and it intends to build support and coordination with other related regional and local partners to assist MPAs for invasive species management.

It aims at giving answers to “actions on all non‐native marine species”, at several scales: 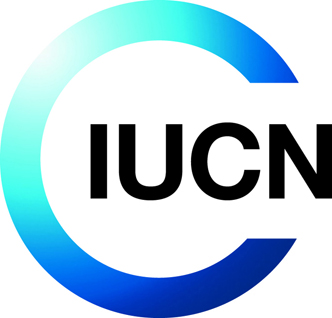 IUCN is a membership Union composed of both government and civil society organisations. It harnesses the experience, resources and reach of its 1,300 Member organisations and the input of some 15,000 experts. IUCN is the global authority on the status of the natural world and the measures needed to safeguard it. The IUCN Centre for Mediterranean Cooperation works with MEDPAN, the Network of Marine Protected Area Managers to achieve the network’s strategic objectives including those related to marine invasive species through the MedMIS platform (http://www.iucn-medmis.org/).
The MEDPAN- Network of Marine Protected Area Managers in the Mediterranean is an organization composed by around 100 institutions and NGOs that either have direct responsibility for managing Marine Protected Areas (MPA) or are involved in the development of MPAs in the Mediterranean. The network's mission is to promote, through a partnership approach, the sustainability and operation of a network of Marine Protected Areas in the Mediterranean which are ecologically representative, connected and effectively managed to help reduce the current rate of marine biodiversity loss.
One of the publications and tools of the MedPAN network is the Strategy for Marine Alien Invasive Species which sets out the broad goals and objectives for the MedPAN network on related issues as well as key actions for each of its goals. It is addressed to actions on all non‐native marine species of plants and animals with a primary focus on those species that are potentially invasive. The strategy intends to build support and coordination with other related regional and local partners to assist MPAs for invasive species management.
It is aligned with the CBD Guiding principles for action to prevent or minimize invasive impacts to biodiversity following the three‐stage recommended hierarchy of interventions (prevention; early detection and rapid response; long‐term control and containment). Further, it also takes into account the Barcelona Convention, the Marine Strategy Framework Directive (2008/56/EC) and the European Strategy on Alien Invasive Species (2003) that provides the framework for the regional approach for all the governments of Contracting Parties to the Bern Convention and of other European States.
As part of the strategy, MedMIS initiative is an online information system designed to keep track of invasive alien species in different Marine Protected Areas (MPAs) in the Mediterranean, since they are one of the biggest threats to the biodiversity of this unique ecosystem.

The overall aim of the strategy on invasive species and MedMIS platform is “To establish a common framework for the MedPAN members to develop action on marine invasive species”. The recommended key actions thus lay the groundwork for cooperative activities between MPAs and their associated partners as well as within local MPAs themselves, to reduce the impacts of IAS and preventing, if possible, further introductions and spreading into these environments.

The method of the strategy is based on MedMIS platform which has five axes of action: prevention, detection, rapid response, control/mitigation and cross-cutting activities.

Each of the axes has specific goals and all of them are accompanied by monitoring, reporting and information exchange tools:

To conduct monitoring, a priority list of the highest potentially impacting species (The Black List) has been developed with the assistance of different taxonomic and invasive experts from the Mediterranean following an evaluation ranking exercise. Revision of the priority species and additions on new species arriving in the region is conducted every 2‐3 years (last revision 2016).

The development of MedMIS Information Portal for invasive species management also facilitate the goals at the MedPAN network level and will provide a framework to support the work of MPA managers and others with a variety of tools and resources.

By a collaborative partnership with other institution/s, an online database that records, tracks and maps alien species in the Mediterranean, MedMIS platform assist managers to improve the knowledge of invasives and collect the information on the results of their monitoring activities. 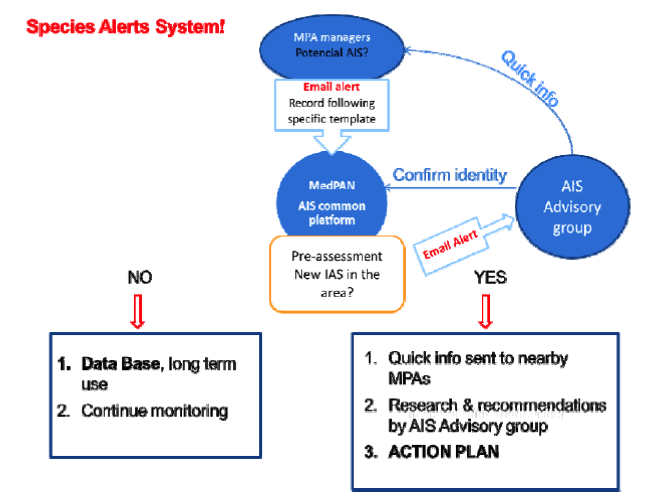 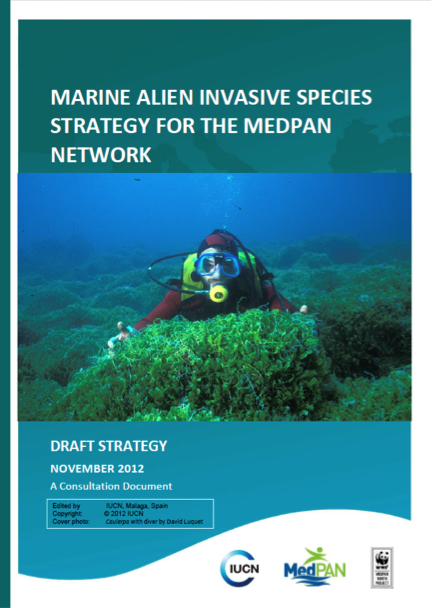 The practice has the potential of transferability to other areas and even to other contexts since its essence is based on the exchange of information and collaboration. In fact, it has a comprehensive nature and the interesting thing about the strategy and the MedMIS initiative is the collaboration of the most agents and areas as possible.

The project has been developed by IUCN Centre for Mediterranean Cooperation. The publication of the strategy has been funded by the European Regional Development Fund (MedPan North Project), the Mava Foundation and the Spanish Agency for International Cooperation and Development (AECID). At present, the project is partly funded by Mava Foundation.