Large scale development of wind energy in the Netherlands, far offshore and after 2023

Offshore wind energy is one of the renewable energy sources for the Netherlands with large potential. Currently the Levelized Cost of Energy (LCoE) of offshore wind energy is much higher than the market price of energy. In order to develop (part of) this large potential in offshore wind, identifying the optimal way to generate further reduction of the LCoE is key. That requires vision and setting policies for developing larger scale offshore wind for the period 2023-2030/50. In this setting, the Netherlands Enterprise Agency (RVO-Ministry of Economic Affairs) and TKI Wind op Zee have commissioned Royal HaskoningDHV and Ecofys Consultancy to conduct an Offshore Wind Sector Consultation. With the use of this research The Dutch government is able to ensure a stable roll-out program both in capacity (MW) as in planning (years). This is needed to increase competition in the market and to ensure scale and growth effects. A stable roll-out program will eventually reduce the day-rates and the risk premium, which will accordingly reduce the LCoE.

This practice investigates the potential for large scale implementation of offshore wind in locations further offshore and its impact on the LCoE in the Dutch part of the North Sea. The basic assumptions of this consultation are summarized in Table 1.

basic assumptions of this consultation

Under the current Energy Agreement a cost reduction of 40% is foreseen. After 2023 autonomous innovation in technology and learning effects are expected to continue to bring costs down. Figure 2 presents the LCoE of an wind farm with a Financial Investment Decision (FID) in 2010. 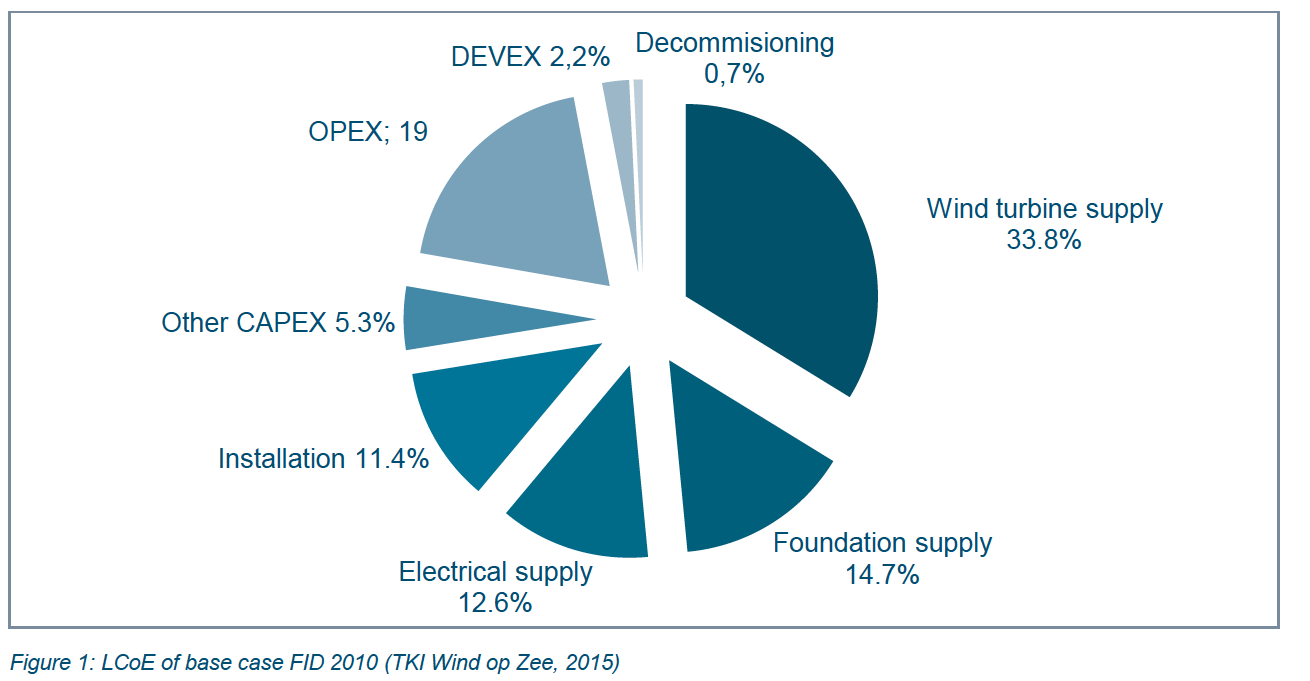 This sector consultation is looking for the differentiators in cost reduction as a result of large scale roll-out of wind energy far offshore. In the consultation three scenarios were compared:

The options for cost reduction could materialise due to

The report summarizes the main conclusions, which form the input for the policy agenda.

Two scenarios for roll-out are suggested:

It is expected that a potential LCoE reduction of 6% can be realised when a roll-out of 1250MW annually for a period of four years is applied in future large scale development of offshore wind energy. The cost reduction potential of the WTG and foundation costs have the largest impact, since these are relatively large contributors to the LCoE.

A detailed long term vision should be developed on the most cost efficient way to integrate large scale additional production of offshore wind energy into a high voltage grid on the North Sea connected to the surrounding countries and the required means (including interconnection) to ensure grid stability.

Collaboration with neighbouring countries is essential to achieve large scale implementation of offshore wind and the required cost reduction. Collaboration related to e.g. the electrical grid (interconnectors), the construction of a work island or the harmonization of the subsidy regime could result in a substantial cost reduction which may not be possible when each country acts on its own.

There is an urgent need to formulate a broader and stable policy on the Dutch energy transition beyond the horizon of the current Energy Agreement, on two levels:

The scenarios used and the changes in technology, market and supply chain and financing of wind farms are relevant for many countries. The information collected in this practice can therefore be used as input for other countries or regions. However, this practices focuses on The Netherlands specifically, with a Dutch institutional background. This means that the recommendations can only be applied for in The Netherlands.

This practice was commissioned by RVO (Netherlands Enterprise Agency) on request of the TKI Wind op Zee (TKI Offshore Wind).