Land-Sea Interactions (LSI) and how they should be addressed play a key part in the successful delivery of the Maritime Spatial Planning Directive (2014/89/EU). Articles  4, 6 and 7 explicitly require that LSI be taken into consideration either via formal or informal processes, for example ICZM and these should be reflected in member states maritime spatial plans. In order to planners DG Environment commissioned a study which led to the production of a brochure entitled “Land Sea Interactions in Maritime Spatial Planning” designed to give an understanding of how LSI can be addressed when developing maritime spatial plans. The brochure examines the LSI of eight key marine development sectors and how these can be considered in the context of MSP development.

Many activities which take place on land can have a significant impact on the health and status of our seas and oceans and vice versa.  Marine and coastal activities are often closely interrelated as is noted in Recital 16 of the Maritime Spatial Planning Directive (2014/89/EU). The specific requirement to take this into consideration is further stated in Articles 4, 6 and 7. The MSP Directive does not state that LSI should form part of the MSP process directly, rather that Member States should address them via formal or informal processes for example Integrated Coastal Management (ICM).

MSP forms one part of the European Union’s Integrated Maritime Policy and in order to operate effectively and successfully due consideration needs to be given to the interface between land and sea. In order to assist planners and authorities the Directorate General for the Environment of the European Commission funded a study to analyse LSI through the planning process and the brochure "Land Sea interactions in Maritime Spatial Planning" summarises its findings.

The brochure “Land Sea Interactions in Maritime Spatial Planning” explore the relationship between LSI and the MSP Directive specifically providing key messages which need to be considered in the MSP process in relation to eight of the most typical marine development sectors.

Key LSI’s for each of the sectors above were then identified and described taking into consideration, a) the category of LSI being examined (environmental, socio-economic or technical) b) Sources of information to be considered c) existing policies and guidance d) assessment tool available e) potential mitigation measure that can be applied f) identify which stakeholders should be involved in discussions and g) management options which may be used to address a particular LSI throughout a 4 step process as in the diagram below.

In the brochure for each of the eight marine development sectors, case examples are used to demonstrate good practice in addressing LSI at different stages in the plan making process. Case studies have been drawn from marine plans, sectoral plans, terrestrial plans and other projects.

The issues identified, how evidence was collected, best practice assessment techniques are all described concisely. Best practice examples of how principles have been applied the development of plans are describes as well an in an implementation context.

For each of the key marine development sectors the issues and information to be considered by planners are set out in matrices (please see example below). 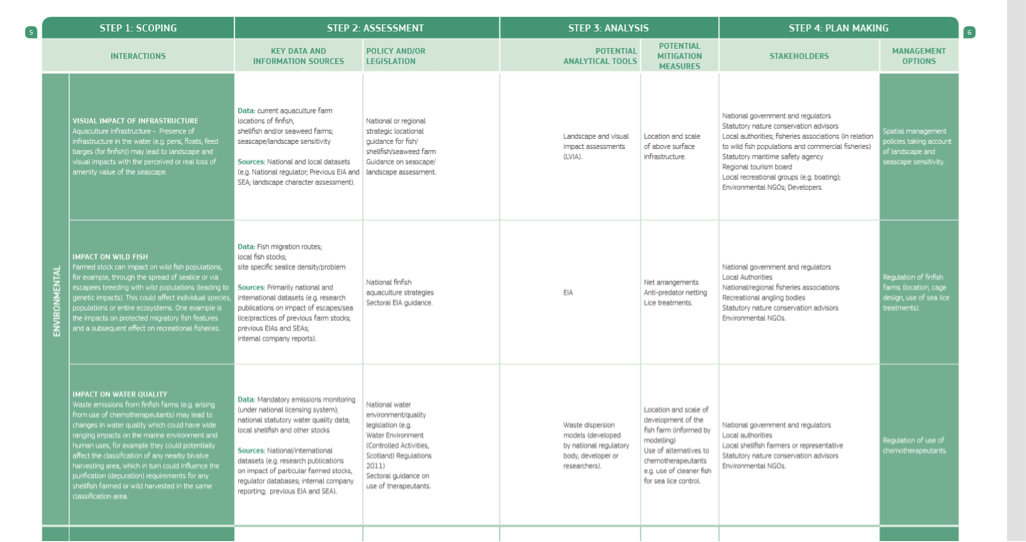 The guidance in the brochure is designed to be universally applied by marine planners when considering the eight sectors when developing and implementing maritime spatial plans.

Directorate General for the Environment of the European Commission

Directorate General for the Environment of the European Commission. Direct costs for the elaboration are unknown.