An often-discussed theme in Maritime Spatial planning is the relation between Offshore Wind Farms (OWF) and shipping and how to plan to reduce conflict/risk between the two sectors. There is consensus amongst stakeholders and researchers that OWFs can pose risks to maritime operations in terms of reduced navigational safety. This report, funded by the NorthSEE project, deals with this issue and focusses on the navigational risk assessments (NRA) conducted by navigational safety authorities in the North Sea countries. A NRA is commissioned by OWF developers to get approval for building a wind farm, and has the goal to improve safety for shippers (fishers, anglers, boaters) and offshore wind farm turbines. The report presents the current status of NRA processes in the countries and provides recommendations to improve and harmonize these NRAs. Harmonization can ensure coherence in transnational licensing of OFW and provides other more clearity for stakeholders and governmental organisations.

Perhaps the most widely explored topic under the broader thematic area of spatial Offshore Wind Farms (OWF) maritime interactions is the effect of OWFs on maritime navigational safety. There is consensus amongst stakeholders and research has proven that OWFs can pose risks to maritime operations in terms of reduced navigational safety, which can lead to accidents. Maritime accidents can be very expensive for all parties involved, and in the absolute worst cases, such accidents can lead to human casualties or serious environmental damage. This is the core reason why authorities who are involved in the consenting and approval of marine projects tend to pay special attention to the maritime risks associated with OWF. Traditionally, the focus on maritime risk assessment/management has been more pronounced during the licensing and approval stages of OWF projects, than during the planning or MSP process. While already in the MSP process the NRA could be of an added value, addressing potential conflicts and risks.

As the offshore renewables sector continues to grow and evolve, addressing the mutual risk between OWFs and maritime activities is becoming a pressing issue for stakeholders across the spectrum. Technological developments such as floating turbines further away from shore, as well as socio-political and economic developments such as the European Energy Grid, and transboundary MSP have now added a new hue of urgency to this quest for solutions. There is particular interest for solutions which can help to close the gap between planners and approval authorities, to ensure that limited marine space is effectively utilized and that disruptions to the different sectors are kept at a minimal level throughout project lifecycles. The NorthSEE project’s, aim is to further ensure that these solutions contribute to improved, coherent transboundary marine plans.

Concerning the second part, the authors surveyed stakeholders from 6 North Sea member states, as well as the US as a test-case. The participants were first asked to describe the NRA process in their countries (section II-2). Following this, they were asked to rate their agreement with 10 statements (section II-3); each statement was derived through a literature review exploring the shortcomings of existing NRA processes. By understanding why participants agree and/or disagree with each statement, the authors were able to produce a list of recommendations to improve NRA processes further (section II-4).

Spatial Conflict between OWF and shipping

The following figure provides an overview of the legal aspects of safety distances, as the international guidelines available are already quite comprehensive. Also, it deals with the technical, implementation, and enforcements aspects. 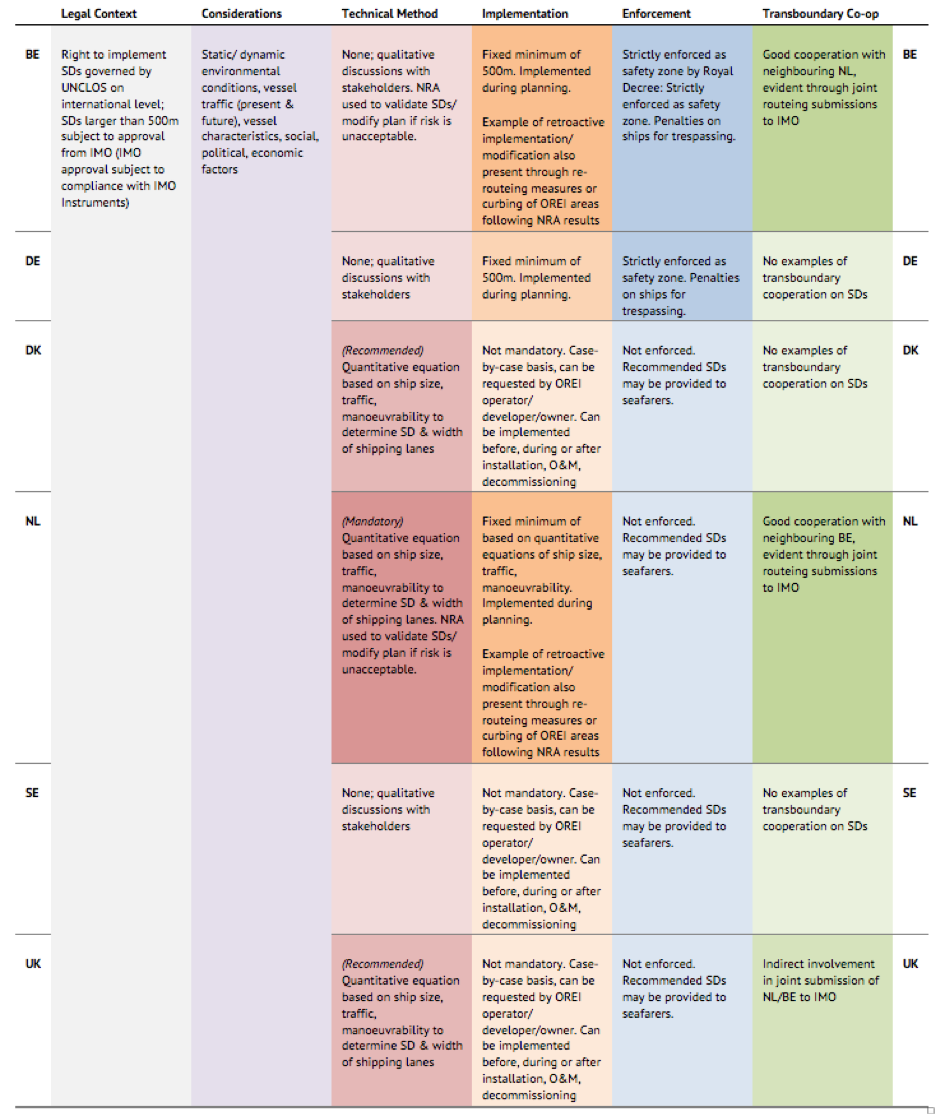 One way of resolving spatial conflict between OWF and shipping is by conducting navigational risk assessments (NRAs). These NRAs already exist in the North Sea countries, but each country uses their own methodology and approach. In general, a NRA is a process which is conducted by Offshore Wind Farm developers to get approval for their projects. Through this process, developers can demonstrate to marine licensing authorities that their projects do not pose unacceptable high risk to other maritime activities. Thus, licensing authorities tend to be more familiar with NRAs than planners. If NRAs were also adopted to be a part of the planning process, however, it could substantially help to close the gap between marine-areas-as-planned, marine-areas-as-approved, and operational scenarios. The report explains the specific NRA process per country and the shortcomings in conducting the NRAs.

In the study 10 statements related to NRAs in the different North Sea countries have been researched on the following themes:

The following pictures shows the outcome of the respondents per country. It shows that on some issues mainly on harmonization, the countries have a common position. However, when it comes to transparency and stakeholder communication, there is an increasing disagreement among Maritime Spatial Planners in these countries.

statements related to NRAs in the different North Sea countries 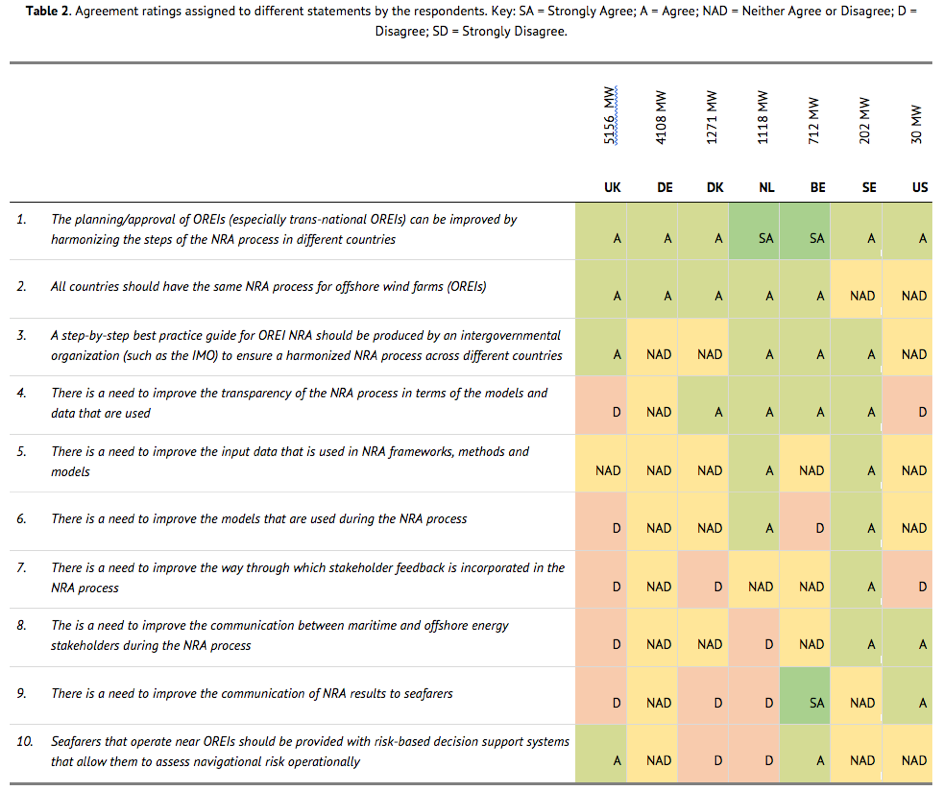 The findings from this report are important for all countries currently developing Offshore Wind Farms in their EEZs. Often countries already have NRA processes in place. However, the findings and recommendations for improving the NRAs concerning harmonization, methods and stakeholder communication are also relevant for all countries dealing with the similar issue. While the North Sea countries are already advanced in their processes, they provide a lot of information and best practices for countries in other sea basins.

The report was written under the NorthSEE project, funded by the North Sea Region Interreg VB Programme. The direct costs for writing the report are unknown.