Handbook on Territorial Democracy and Public Participation in Spatial Planning

The main objective of the Handbook is to contribute to improving knowledge of the basic theoretical and practical issues (including their legislative and institutional aspects) on public participation in spatial planning and spatial development in general.

The “Handbook on Territorial Democracy and Public Participation in Spatial Planning” was prepared in preparation of the 16th session of the Council of Europe Conference of Ministers responsible for Spatial/Regional Planning (CEMAT) held in Nafplion (Greece) on 17 June 2014 with the aim to contribute to existing knowledge of basic theoretical and practical issues concerning public participation in spatial planning and development (including legislative and institutional aspects). CEMAT is a pan-European platform for co-operation, exchange of best practices and definition of common principles on spatial development. The Handbook further contains the “Nafplion Declaration: promoting territorial democracy in spatial planning ” adopted by the Ministers on the occasion of the Conference.

The main objective of the Handbook is to contribute to improving knowledge of the basic theoretical and practical issues (including their legislative and institutional aspects) on public participation in spatial planning and spatial development in general. In view of the importance of the right of citizens to define their space of work and other activities in the hierarchy of the list of human rights, (the guarantor of which has always been the Council of Europe), such knowledge becomes a condition sine qua non for planning towards sustainable human development and quality of life.

The Handbook was jointly produced by the Committee of Senior Officials (CSO) of CEMAT, in charge of preparing the 16th session of the Council of Europe Conference of Ministers responsible for Spatial / Regional Planning and the Department of Spatial Planning and Regional Development of the University of Thessaly. The Committee of Senior Officials provided the information on individual Member States and the University of Thessaly contributed the scientific background and coordinated the entire publication.

In order to collect the necessary information regarding participation at the European level (from Council of Europe Member States), three types of documentation sources have been used: a) a questionnaire elaborated by the Secretariat and sent to Council of Europe Member States (i.e. to central administration authorities - mainly ministries - responsible for spatial planning), b) research through web sites / internet, and c) a library search through relevant bibliography. For the countries which did not respond to the questionnaire (the majority of them 32 out of 47) the other two kinds of sources (library and internet research) were used to collect information. 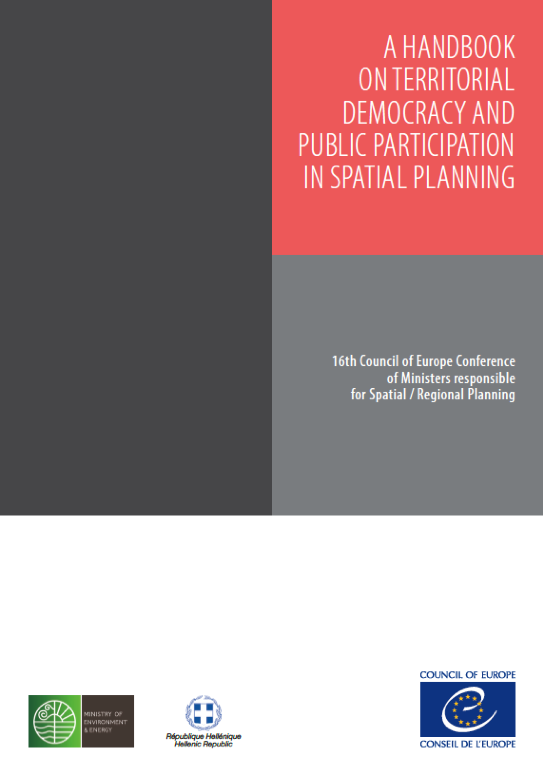 Cover of the “Handbook on Territorial Democracy and Public Participation in Spatial Planning” available online.

The right of citizens to define their space of home, of work and the surrounding environment, is high in the hierarchy of the list of human rights. This right is also expressed and implemented through participation processes in spatial planning. Basic definitions are given to support implementing this process in different context in Europe. Some basic definitions are as follows:

Public participation. Citizen participation is a community-based process, where citizens organize themselves and their goals at the grassroots level and work together through nongovernmental community organizations to influence the decision-making process. Citizens get most involved in this process when the issue at stake relates directly to them. Furthermore, citizen participation occurs when all the stakeholders cooperate to implement changes.
Public consultation. Consultation is the action / process of asking (by an institution, authority) the people’s / citizens’ advice or opinion on a certain planning matter (e.g. project, plan etc.) before its approval. Consultation is a rather restricted form of participation in which it is possible to express one’s opinion or advice, usually in writing.
Public participation in spatial planning. Public participation may take the form of constructive collaboration with planners and local authorities, thus enriching the scope of participation and the variety of spatial planning projects in which participation occurs, but can also take the form of violent reactions against planning proposals put forward by planners and local authorities. At the present time, planning authorities and planning theorists must try to develop new techniques and strategies to address competing interest groups and achieve consensus. Information and communication technologies can be of considerable help in the process of public participation and stakeholders’ consultation and engagement.
Spatial / territorial governance. Territorial governance is a global concept which characterizes the way how spatially-relevant policies, considered together, are applied. Territorial governance is assessed against its contribution to the achievement of the objectives of spatial development policies. It is the result of multi-level and cross-sectorial relationships in the field of public policies. It refers to horizontal and vertical cooperation in the shaping and implementation of these policies. In this respect, the principles of subsidiarity and reciprocity advocated in the Guiding Principles are of particular relevance.

Three main perspectives in spatial planning are identified by the Handbook:

Strategies and means of participation

Outcomes of public participation include not only the decisions regarding the issues being addressed but also a number of parallel consequences which may occur as a result of participation, such as development of a strong community organization, decentralization of power to a community or reaffirmation of democratic values. Outcomes may be of a quantitative or qualitative nature and may be expressed through indicators.

Results of the survey are provided for 47 countries on the following elements:

Finally, the full text of the Nafplion Declaration is included in the Handbook. The overall objective of this resolution is to provide some guidelines, based on best practices that can be adopted by Member States in order to leverage the potential of participatory democracy in spatial planning. The declaration sets a framework in which people can express informed opinions regarding spatial plans that affect them directly or indirectly and can influence, to varying degrees, the spatial plans of their territories.

This Declaration is intended to increase awareness among Member States of the topic. The very broad geographical coverage of the countries that participate in CEMAT adds value to the international dimension of this resolution. It was intended to become a source for facilitating cross-border cooperation and for establishing common ground to resolve international spatial planning issues. The declaration sets an example of the fruit that international cooperation in spatial planning can bear, even when sensitive topics such as public participation are concerned.

Experiences, strategies and methods of public participation can be capitalized when defining stakeholder involvement activities in the context of spatial planning in general, including MSP. The Nafplion Declaration support the need for a strong involvement of stakeholder and the public in spatial and territorial planning on land and at sea.

Cost of the Handbook elaboration is not known. The Handbook was prepared in preparation of the 16th session of the Council of Europe Conference of Ministers responsible for Spatial/Regional Planning (CEMAT) held in Nafplion (Greece) on 17 June 2014.