Review of the existing ship routing system and maritime transport facilities in the Bulgarian Black Sea coast. Development of a concept and a methodology for design and analysis of a new vessel traffic system. Development of a new ship routing system in compliance with the most recent maritime transport principles and standards. Analysis of the new systems in terms of its efficiency, safety, impact on the environment, on cabotage and passenger transport, and on the prohibited and restricted areas.

MARSPLAN Case Study 4: “Elaboration of Detailed Study on the Establishment of a New Ship Routing System in Territorial Sea of the Republic of Bulgaria” takes into account the provisions of Directive 2002/59/EC establishing a Community vessel traffic monitoring and information system[1]. This study is concerned with traffic intensity, the types of the transported goods, the risk of environmental pollution, the concentration of fishing vessels, specific conditions for sea transport and natural and anthropic hazards.

The main objective of the study is to develop a new ship routing system in compliance with the most recent maritime transport principles and standards.

The study also presents the relevant legal framework, including basic principles and legal norms, international treaties and conventions, secondary EU law and national provisions. The analysis of the existing system for movement of vessels in the territorial and internal waters of the Republic of Bulgariais based on six groups of criteria: 1. criteria arising from regulations of the International Maritime Organization, EU and national regulations; 2. criteria relevant to maritime safety; 3. criteria for maritime security; 4. criteria related to the prospects of development of national sea areas in the directions economy and tourism; 5. ecological criteria; and 6. criteria related to the technical requirements to the system for vessel traffic management.

A proposal for amending the existing vessel traffic system is developed on the basis of a preliminary outlined concept. The concept provides for less unnecessary turn circles and moves the Traffic Separation Scheme away from the coast so as to protect it from pollution in case of oil spills or of discharge of other dangerous for the environment loads. Furthermore, the new traffic system should not interfere with amateur diving at shipwrecks (which requires their location to be officially announced). Also, the development of the new system requires its boundaries in the territorial sea to be announced for avoiding complications. In practice, the concept guides the amendment of the existing and the establishment of the new ship routing system, including  traffic separation schemes (determine mandatory routes of the vessel traffic to and from the ports of Varna and Burgas), bidirectional routes, recommended routes, areas that shall be avoided (areas used by navy for military trainings), areas prohibited for anchoring (due to existing infrastructure, facilities, cultural and historical sites or in accordance with international agreements), coastal areas for vessel movement (e.g. vessels under 300 tons, fishing vessels with a length of up to 24 m, entertainment vessels, vessels involved in rescue, diving and underwater-technical activity, vessels for scientific research, passenger cruise ships with a local destination, etc.), roundabouts, protection zones and deep-water routes (the latter are not provided for in the new system).

The methodology for establishing the new ship routing system is described. This is followed by various types of analyses of the proposed system. First, the project is analysed in terms of its potential to improve shipping efficiency. Secondly, the study examines the probable impact of the new traffic system on navigation safety, on protection of biological resources and aquaculture and on protection of the marine environment from pollution. Thirdly, the impact of the proposed system might have on cabotage and passenger shipping during the tourist season is investigated. Fourthly, the impact of the temporarily prohibited and restricted areas on the traffic separation system is analysed. Finally, the existing and the proposed ship routing systems are compared and assessed in terms of their compatibility with the above-mentioned criteria.

The main outcome of MARSPLAN-BS case study 4 is the report “Elaboration of Detailed Study on the Establishment of a New Ship Routing System in Territorial Sea of the Republic of Bulgaria”.

The Fourth Section of the Report presents the concept and a proposal for a new vessels traffic system of Bulgaria, the methodology for its development and a comparative analysis between the existing and the new system. A map of the amended Traffic Separation Scheme showing the new ship routes near the Bulgarian Black sea coast is given as well (see fig. 1). 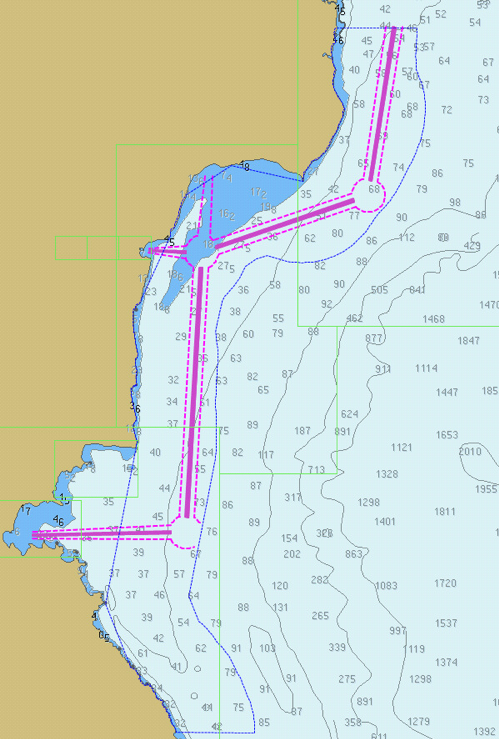 The practice is fully applicable in other contexts, as it provides a framework and methodology for development of a ship routing system. The practice can be transferred by a thorough overview and analysis of the coastal, marine and port characteristics, of the economic activities performed in the territorial sea, including vessel traffic, of the existing ship routing system, by taking into account relevant international, European and national law and by following the steps outlined in the Methodology.