The Draft Welsh National Marine Plan (WNMP) was published in December 2017. The draft Plan sets out Welsh Government’s policy for the next 20 years for the sustainable development of the Welsh marine planning area for both the inshore (from mean high water spring tides out to 12 nautical miles from shore) and offshore regions (beyond 12 nautical miles). The draft Plan sets out ambitions for future use of marine natural resources and outlines aims for positive interactions between different stakeholder groups.

The draft Welsh National Marine Plan (WNMP) sets out Welsh Government’s policy for the next 20 years for the sustainable development of the Welsh marine planning area for both the inshore (from mean high water spring tides out to 12 nautical miles from shore) and offshore regions (beyond 12 nautical miles). The development of the draft plan has taken into consideration relevant legislative considerations including the Marine and Coastal Access Act (2009) (MCAA) and the UK Marine Policy Statement. The draft plan represents the start of an ongoing, cyclical planning process. In the preparation of the draft WNMP an evidence base was collected. This information is summarised in the Wales’ Marine Evidence Report. The Marine Planning Evidence Portal has also been created to display spatial evidence within the marine planning area.

The WNMP has been developed in conformity with the UK Marine Policy Statement (MSP) in order to ensure commonality to UK plans whilst addressing issues specific to Welsh seas. The draft WNMP is an integrated policy document which was produced with input from various Welsh and UK Government Departments responsible for certain marine functions and as it contains policy relating to some non-devolved functions has been produced with the agreement of the UK Secretary of State for Environment Food and Rural Affairs.

Within Welsh Planning Policy the draft WNMP has been developed as part of a much wider picture including both devolved and UK legislation which can be seen summarised in Figure 1 below. The draft plan vision is consistent with the Welsh Government’s commitments to Sustainable Development and the Sustainable Management of Natural Resources under the Well-being of Future Generations (Wales) Act 2015 and Environment (Wales) Act 2016.

The draft WNMP has been developed and adopted for the purposes of section 51 of the Marine and Coastal Access Act (MCAA) 2009 in accordance with Schedule 6 of the Act and in conformity with the UK Marine Policy Statement. 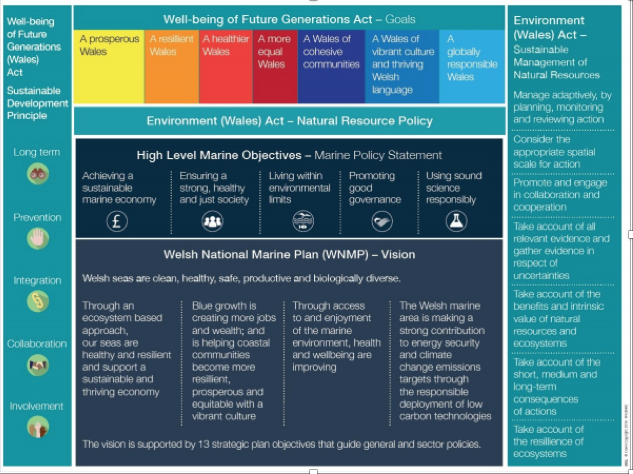 The visions set out for Welsh inshore and offshore regions in the draft WNMP are consistent with the shared UK vision of clean, healthy, safe, productive and biologically diverse oceans and seas. This is to be achieved through an integrated, evidenced and planled approach that respects established uses and interests whilst securing the benefits from new opportunities, recognising the importance of ecosystem resilience, the value of biodiversity and the imperative to adapt to climate change. The visions will be delivered via objectives listed in the table below: 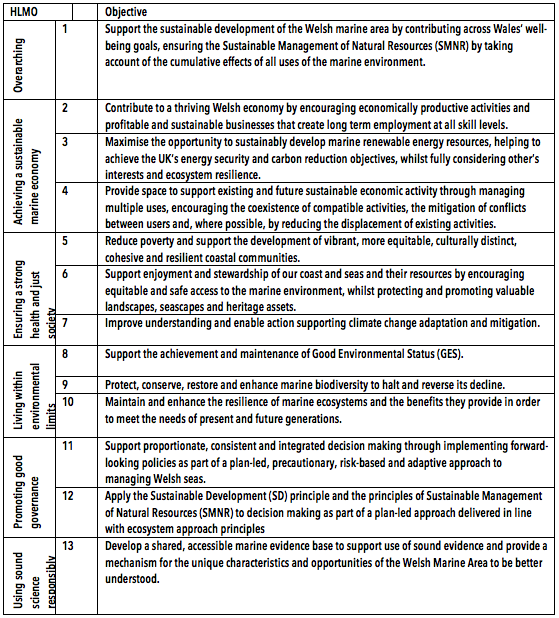 Welsh Ministers are the planning authority for Wales. Marine planning is an ongoing iterative process and lessons learned, experience and understanding gained, will be applied to future versions of the WNMP. The marine planning process involves a number of steps: evidence gathering, identification of issues and opportunities, policy development, plan implementation, monitoring and review, supported by ongoing stakeholder engagement and impact assessments (please see figure below). 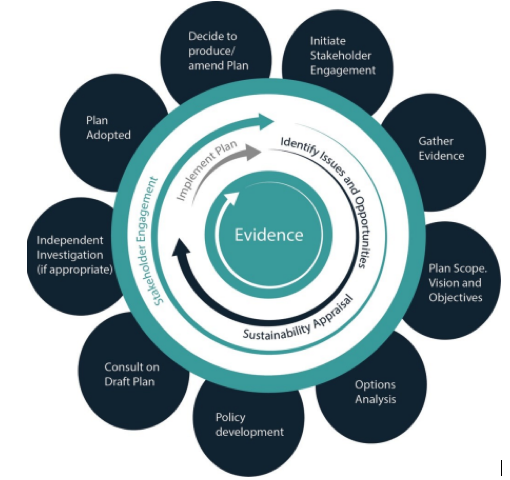 The development of the draft WNMP has taken account of a wide range of requirements and relevant considerations including those set out in the Marine and Coastal Access Act (2009) (MCAA) and the UK Marine Policy Statement. The draft WNMP has applied the ecosystem approach to help ensure it will contribute to sustainable development; applied the working ways working set out in the Well-being of Future Generations (Wales) Act 2015; is focussed on delivering across Wales’ well being goals and has embedded the principles of the Sustainable Management of Natural Resources set out in the Environment (Wales) Act 2016.

As the draft plan area extends to the level of mean high water spring tides and the waters of every estuary, river or channel, so far as the tide flows at mean high water spring tide both national and local terrestrial planning authorities, alongside marine planning authorities were involved in the development of the plan in order to facilitate integration between land and sea. The draft plan provides the policy framework for the future use of Welsh seas but recognises that certain sectors may require focussed sectoral marine planning in order to identify future opportunities and provide guidance to industry on where to focus investment. The draft plan contains chapters on specific sectors which provide details of supporting policies which will encourage further work between relevant authorities to undertake sectoral marine planning in order to contribute to better understanding of opportunities within and the need to refine Strategic Resource Areas (SRAs). 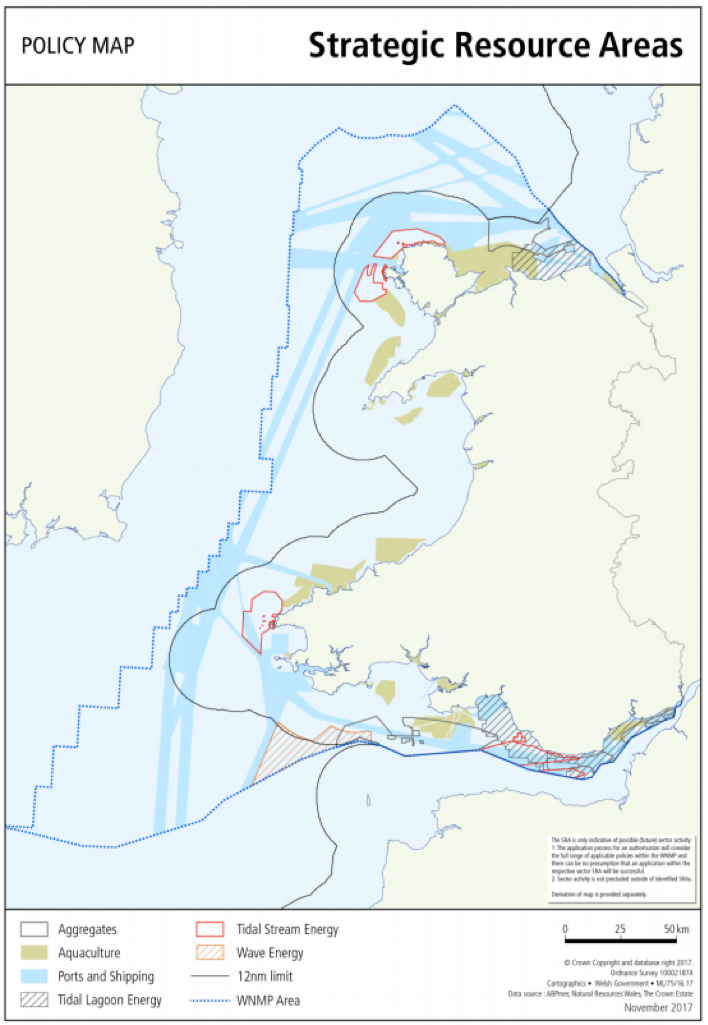 The draft plan contains both general and sector-specific policies. General policies are cross-cutting plan policies of a general nature and apply to all sectors and activities, though the degree to which they need to be considered depends on the nature of the proposal. They are set out under the UK HLMO (high level marine objectives) themes of the MPS. Sector specific policies operate alongside general policies and relate to a particular type of activity. They include supporting policies (to support the development of a given sector) and safeguarding policies (to protect a given sector’s existing or potential future activities).

General Policies are grouped into the following sub categories:

A series of policies also exist for the following sectors: 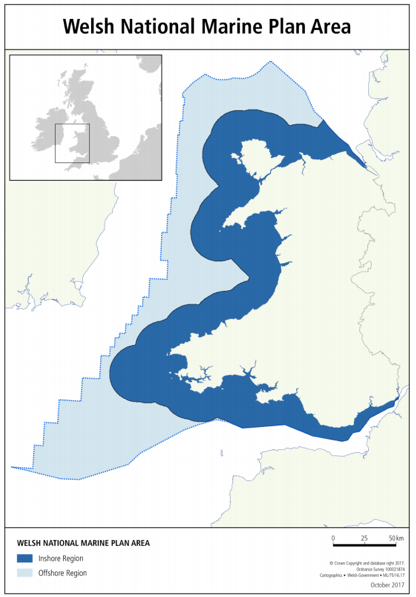 In addition to the draft WNMP document itself the following supporting documentation/outputs have also been produced:

An overview of developing the Welsh National Marine Plan (document)

Evidence for the Welsh National Marine Plan which was collected during the development of the draft plan is also available and includes:

Development of a Coastal Communities Typology for Wales (document)

This document refers to Wales only but maybe of relevance to other countries developing marine spatial plans.

The draft WNMP states that working with neighbouring administrations and stakeholders is required to ensure the smooth operation of the marine planning process. The draft plan notes that areas of key importance in this regard are the cross-border estuaries of the Dee and the Severn and more widely across the Irish Sea. The draft plan notes than marine ecosystems operate at a variety of scales, which often work across administrative boundaries. Co-ordinating regular liaison, engagement and sharing of evidence is required when planning for activities, which occur across boundaries. UK Marine Monitoring and Assessment Strategy (UKMMAS) is a shared evidence base which can assist with the co-ordination of cross border marine planning.