As part of the BaltSeaPlan Project, a nine-step process was used to develop a pilot maritime spatial plan for the Pomeranian Bight and Arkona Basin through an informal exercise. The pilot area situated between South Sweden (Skåne), Germany, Poland and Denmark west of the island of Bornholm involves six planning areas with differing planning cultures and interests. The area was therefore chosen due to the various transnational issues and challenges of working across borders. The pilot process gathered data and engaged with stakeholders to identify conflicts between maritime uses. It also identified key lessons and recommendations for transnational MSP process

The BaltSeaPlan project accompanied the EU Maritime Policy by supporting the introduction of Integrated Maritime Spatial Planning and preparation of National Maritime Strategies within Baltic Sea Region. The pilot plan was an informal process which was started before the adoption of the MSP Directive. However, lessons from the project and pilot plan informed the drafting of the MSP Directive and other MSP in the Baltic Sea Region. It also contributed to the implementation of the HELCOM recommendation on broad-scale Maritime Spatial Planning and the VASAB Gdańsk Declaration. The planning process in the Pomeranian Bight and Arkona Basin started with a level playing field and took a fresh look at the issues to be resolved and possible solutions without being constrained by existing plans.

The aim for the pilot planning process was to:

The integrated MSP steps developed during the Plan Coast project was adapted for developing the pilot. This included key stages such as the pre-planning, stocktake of current uses, exploring methods for addressing spatial conflicts and drawing the draft maritime spatial plan. (see full steps below) 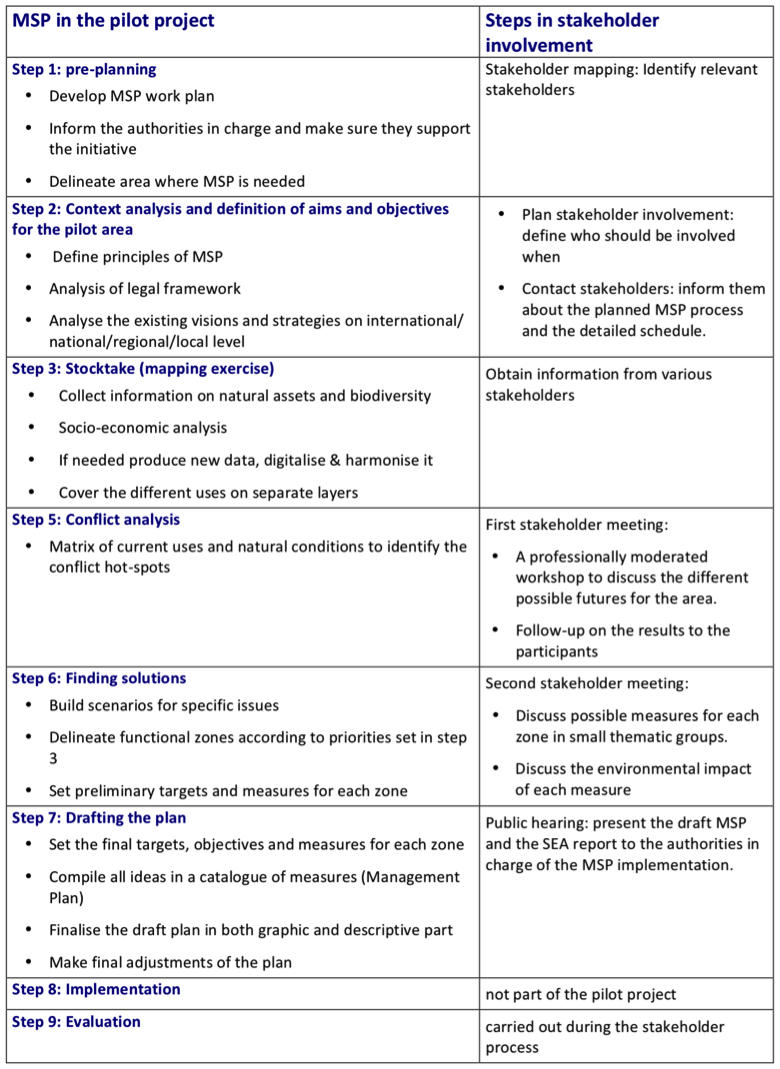 Delineating the exact extent of the pilot area was a key task at the beginning of the pilot project. The area comprises of the territorial seas and respective EEZs of Denmark, Sweden, Poland and Germany. There were contradicting legal opinions between Germany and Poland concerning the area of the northern approaches. The border region between Denmark and Poland also had unclear legal status. These areas were marked as a disputed area and as marked out for further discussion at the high level decision making. 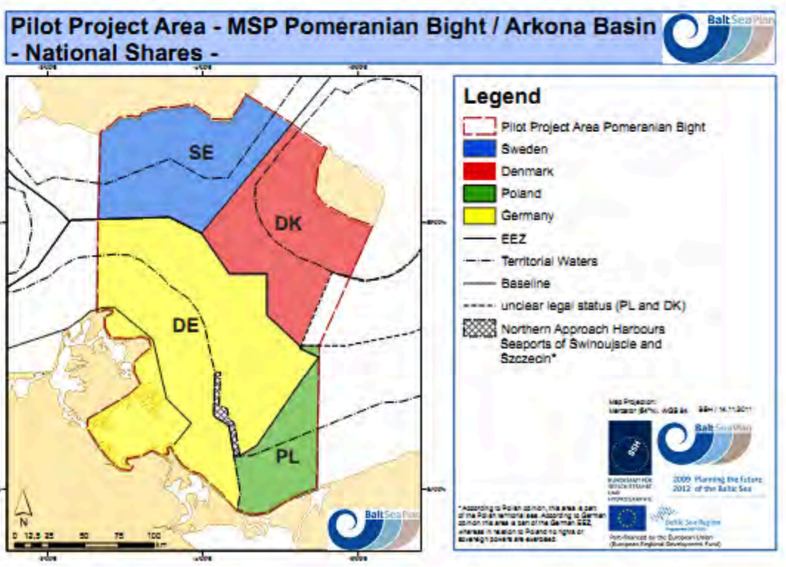 The natural and the socio-economic condition of the pilot area was analysed although a full SEA was not undertaken. This included information and data on sea bed morphology and bathymetry, salinity, ice conditions, wind conditions, as well as natural assets such as sea birds, fish and harbour porpoise. This was complemented by a description of demographic trends, the economic situation in the respective coastal regions, international legislation affecting the pilot area, and the existing spatial planning framework and policies in the respective countries.

A comprehensive stocktake of current uses together with a brief overview of the trends and developments expected in these. This focused on transnational uses that extended across the entire pilot area and included shipping, nature conservation, offshore wind farming, tourism, fisheries, and sand and gravel extraction. Based on the stocktaking maps, conflicts were identified by the planning team. The stocktaking maps and conflicts were further discussed and refined with stakeholders.

Methods such as the conflict matrix were used to identify and analyse conflicts (see example below). Marxan software was successfully applied to identify potentially suitable areas for offshore wind farming and fishery zones, providing a range of scenarios that can now be further discussed and fed into the decision-making process. 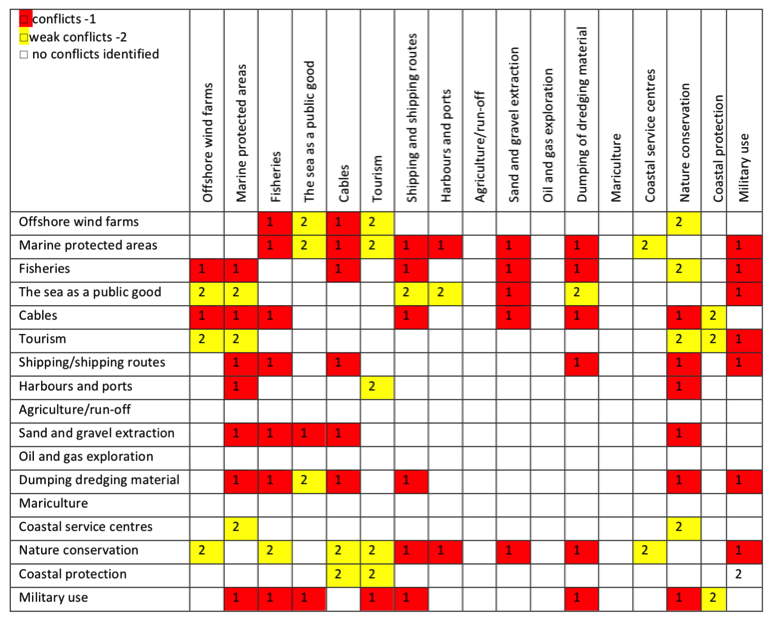 Conflict matrix used for the Polish share of the pilot area

The pilot plan defined objectives for different maritime uses. For example, for energy the key objective was to find suitable areas for offshore wind farms. Objectives were also defined for shipping, tourism and nature conservation. Zoning approach was then use to translate these general objectives into area categories by taking account of the various conflicts and produce the draft maritime spatial plan (see below). Zoned areas in the draft plan included: 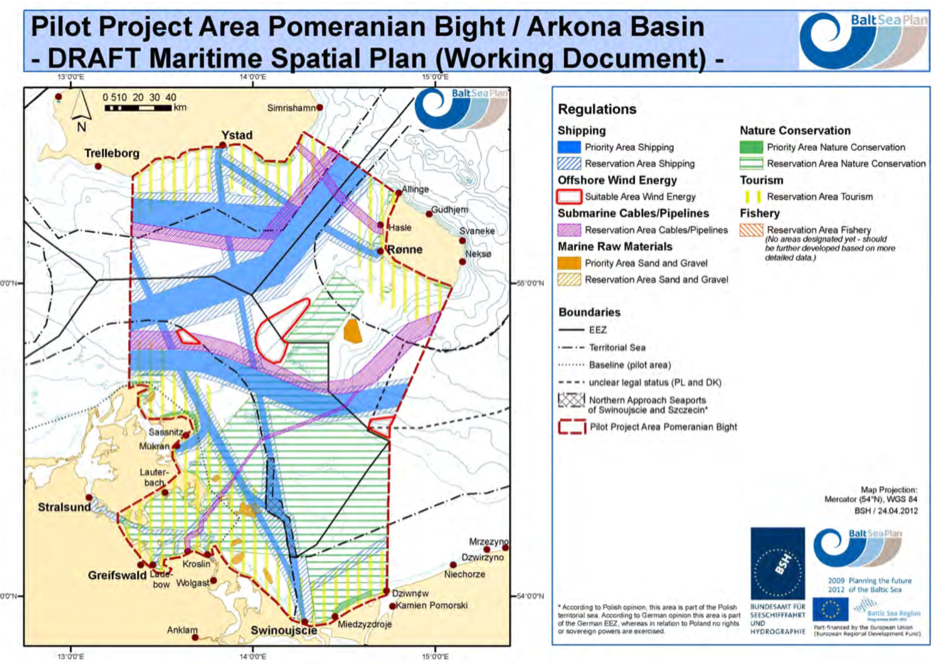 The planning process also identified issues and recommended planning approach for each of the sectors that were analysed. Since this was one of the first practical cross border processes in the Baltic Sea, it identified practical challenges and lessons from the planning and stakeholder process. Recommendations for implementing MSP included those targeting the organisation, planning process and the various achievement of the pilot project.

The key lessons and recommendation developed considered issues that should be considered in other transnational MSP processes based on technical aspects, stakeholder involvement, necessary resources and working as a team during the planning process.