The Blue economy concept and the Blue Growth agenda as a set of strategic objectives, offer principles and guidance to identify blue economy potential for the cross-border Maritime Spatial Planning (MSP) processes. Coastal regions and areas are recognised as having economic growth potential that exceeds the levels of inland regions, which indicates that the sea basin withholds valuable strategic resources in aiming for sustainable growth in the Plan4Blue (P4B) project area in Finland and Estonia.

This report builds on the current state analysis to outline and summarise some key strategic visions, aims and objectives for the future, communicated by a wide range of blue economy stakeholders in the Baltic Sea Region (BSR) and globally, that is the EU, OECD, UN and focal blue industries that have all published visions and guidelines or strategic objectives and policy papers to pursue future growth in a sustainable manner. This is essential for the provision of key ecosystem services to combat climate change or slow coastal erosion (EUBSR, 2017b).

The strategies for the key blue industries call for cross-border and cross-sectoral development in the Baltic Sea region to achieve blue growth effectively. In order to maintain and improve the health of the Baltic Sea and wellbeing in the coastal areas, strategic goal setting for short, medium and long-term is required. The blue economy industries are interconnected and interdependent, which should be seen as an advantage in the strategy formation and differentiation in the markets to achieve economic growth in the future. The report takes up these aspects and analyses the current status, potential and development of key sectors.

The data presented in this report illustrates the potential and future development of the Blue Economy in the P4B project area and will provide information for the MSP process aiming at supporting sustainable growth. The blue industry sectors and global, European and national policy makers have all set their visions to embrace sustainable development and to address economic, social and environmental objectives they want to pursue. By involving cross-sectoral participants in the investigation of Blue Economy, this report attempts to bring together some of those sectoral visions and strategies that set perspectives to the blue economy development in the Plan4Blue project area in Finland and Estonia.

Since quantitative, qualitative and desk research was utilised, the applied method can be characterised as mixed.

Because of data limitations in the ORBIS Europe database – time series is only nine years from 2007 to 2016 – the trend analysis for forecasts was made only until the year 2025. In addition, a significant annual fluctuation of some time series causes additional difficulties to make sufficiently reliable trend analysis. Reliability is improved mainly by two ways. Firstly, instead of point estimates for the future trends, interval estimates are used. Secondly, conservative trend forecasts (i.e. moderate changes in the predictions) have been made by choosing a logarithmic form for the basic trend forecasts, if the original time series was significantly variable and the slope of the basic trend is positively or negatively growing on average between 2007 and 2016.

Coastal regions (NUTS 3 level) in Finland and Estonia have been the unit of the analysis in the study. The industry data will enable coastal area (LAU 2 level) analysis too, should it be needed in the later stages of the Plan4Blue project. The blue industry data has also been used to place individual companies on the map and to visualise, for example, their size in terms of the annual turnover and the number of employees. The Figure 1 illustrates the geographical Plan4Blue project area. 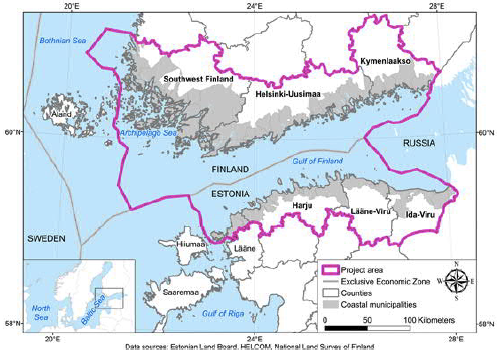 The study highlights the share of total business activities in the Plan4Blue project area related to selected key industries such as the energy sector, marine construction, tourism and marine transport. Figure 2 shows the location of these selected blue industry companies based on the ORBIS Europe database of the beginning of 2017. 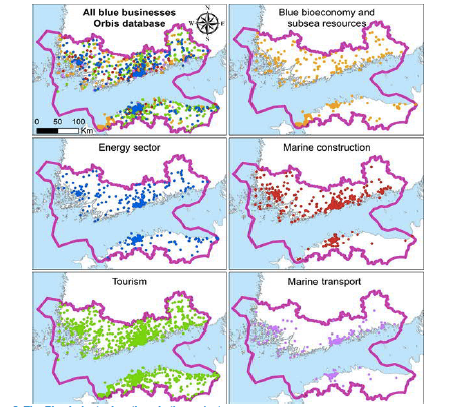 In the following sections, the sectoral development is illustrated with graphs presenting turnover and employment figures development and some future trends in the project area in Finland and Estonia separately. The total turnover identifies the general situation of the sector related companies over the years 2007-2016 and the number of employees gives an overview of how many jobs each sector has created and hence its effects on the whole economy.

As conclusion it has been outlined by the report that to support the growth of the blue economy in the BSR, the infrastructure plays a crucial role for all industries. The EU level aims to transfer 30% of cargo from roads to waterways by 2030 and more than 50% by 2050 (COM, 2011) offers blue growth potential not only to ports and shipping companies in the P4B area but to wider service networks connected to logistics of people and cargo. Infrastructure development secures and improves the accessibility to relatively distant settlements and raw materials extraction sites in Finland and Estonia. The strategic importance of the infrastructure is further amplified by the needs relating to the aging society and sparsely populated areas that are heavily affected by the availability and frequency of transport services.

Demographic changes and global consumption trends also impact the values and norms apparent in the market. Views on ownership and possession of products, what meanings are perceived and what outcomes are expected from consumption processes, how working time and free time is valued and allocated etc.  Joint marketing efforts are needed to promote and build (global) image for BSR and to design attractive cross-border and cross-industry blue service paths and products.

Although maritime industries are partly specific for the region, the methodolgy, some findings and concluding remarks are transferable. This is mainly true for aspects of infrastructure, sustainability, and some future development perspectives for the blue growth industries.