The tables distinguish between conflicts and synergies of different pairs of sectors that were the focus of the Central Baltic case study of the Baltic SCOPE project. They were used to create an overview of the scope of interests involved as well as potential conflicts in specific topic areas.

The tables were developed in the context of the Central Baltic case study for the BalticSCOPE project. Relevant sectors included energy, environment, shipping, and fisheries for the three countries involved: Estonia, Latvia and Sweden.

World Café discussions were held at thematic meetings involving mixed groups of stakeholders and sector experts. These discussions identified conflicts and synergies across sectors, which were then compiled into tables in a working paper. Conflicts and synergies were distinguished for each pair of sectors and then classified according to two dimensions: cross-border/cross-sector – cross border/single sector and national/cross-sector – national/single sector. This matrix provided an overview of the scope of interests and potential conflicts in specific topic areas.

Project partners reviewed and refined the tables to ensure that only those of a transboundary nature were further discussed. The tables were then used in discussions at the project’s Stakeholder Conference to gain feedback on proposed solutions to conflicts and potential synergies, and draft recommendations. Following the conference, a comprehensive table was developed to condense cross-sector conflicts and synergies identified by the stakeholders. This comprehensive table was then discussed among country planners in combination with an overall map.

The Comprehensive Conflict and Synergy Table presented a condensed version of the conflicts and synergies identified by stakeholders. It can be viewed as a first step towards identifying important conflicts and potential solutions, but is not a proper planning tool in itself due to varying level of details and that it reflects potentials rather than real conflicts. It is intended to accompany the cross sector map to identify issues in a spatial dimension. 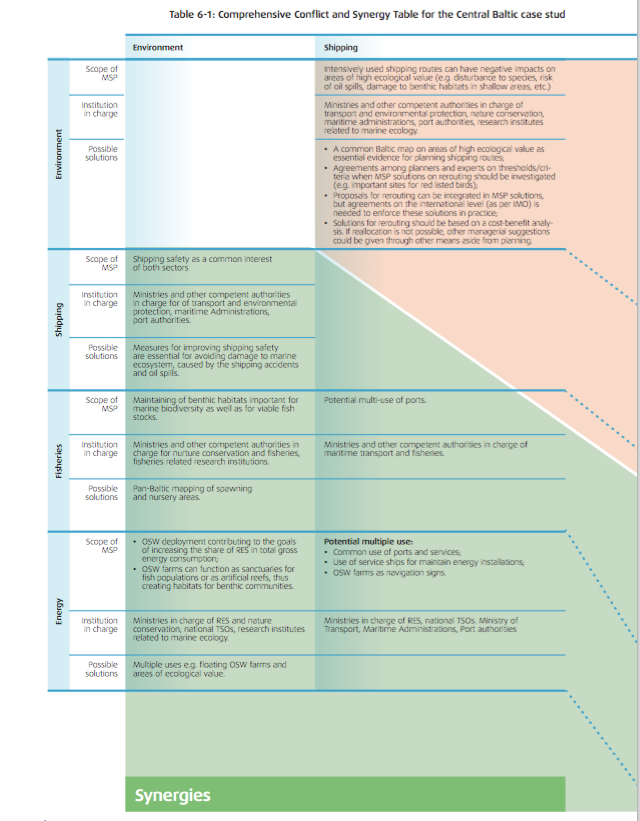 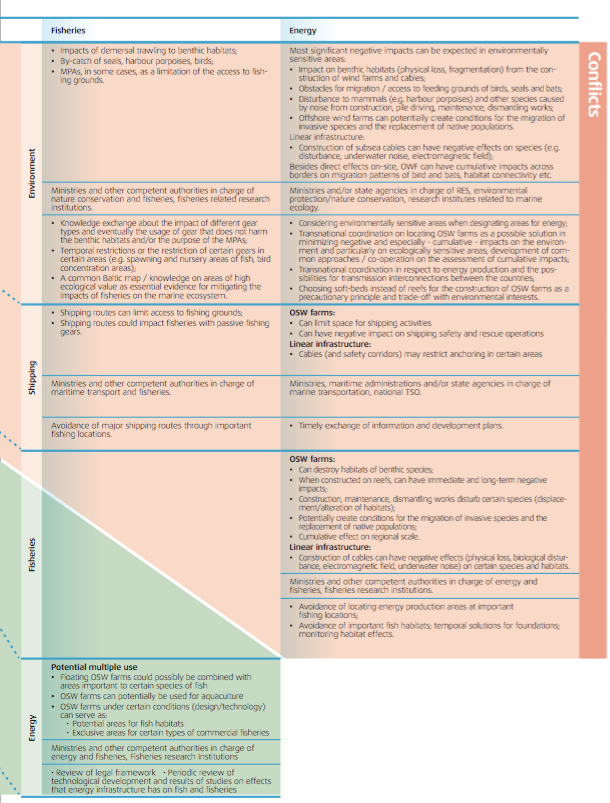 Further information can be found in Chapter 6 of the linked report.

A similar table could be used as part of stocktaking in an MSP process and as a tool to facilitate discussions among planners and stakeholders, and identify potential solutions.

Funding Source: the report was developed within the BalticSCOPE project, funded by EMFF.

Costs: not possible to be defined, as part of the overall funds to BalticSCOPE project.