This practice researches the overlap between the MSFD and other EU and international laws and agreements. It investigates where do synergies exist and includes the opinions of international experts in the Baltic Sea Region.

The EU directives in synergy with the MSFD – the Habitats Directive, the Birds Directive and the Water Framework Directive – differ from the international agreements in that they are legally binding. In addition, the EU Common Fisheries Policy and the Integrated Maritime Policy set expectations on assessing the biodiversity status in the marine areas. The important international agreements related to MSFD are the UN Convention on Biodiversity and the HELCOM Baltic Sea Action Plan, of which especially the latter joins the only non member state Russia into tight collaboration. The MSFD is overarching in the sense that it is expected to link the requirements of these laws, policies and agreements together, and support coordination of the implementation through regional sea conventions. While some of the directives are already operational within the Member States, the MSFD is only taking its first steps.

The work is based mainly on the legal analysis performed by the partners and expert interviews in the partner states. The action was implemented from 1st October 2010 till 30th June 2011.

The following table presents the obligations in the MSFD covered by the other directives and policies, according to the legal analysis. 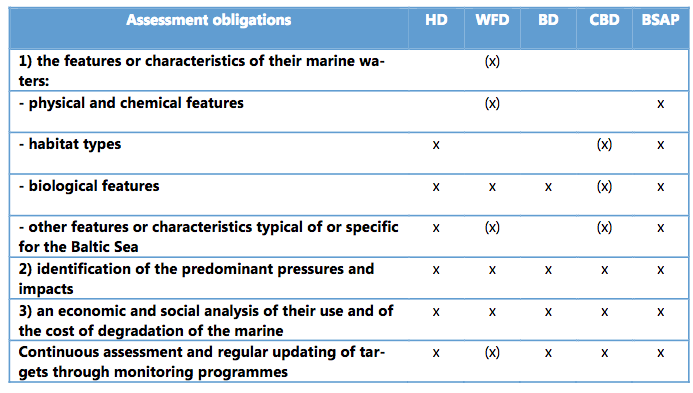 Monitoring obligations in the MSFD covered by the other directives and policies, according to the legal analysis are presented in the following table. HELCOM monitoring has been left out of the table, since it will be revised by 2013. 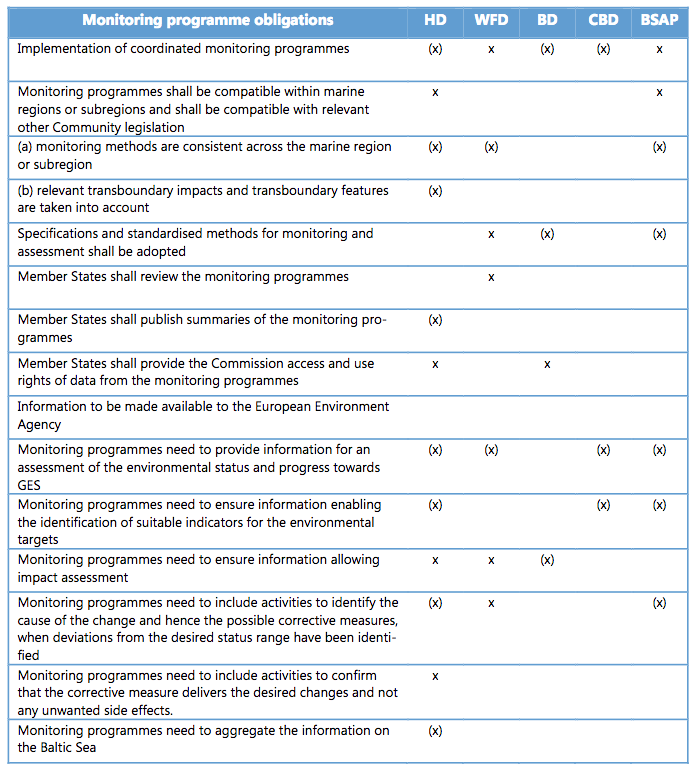 The views from national experts can be read in the document starting at page 23.

The analysis is not site specific and is therefore relevant for the entire European Union, where the same legislation is applicable.