Belgian Vision for the North Sea 2050

In 2014, the Belgian federal government developed a national maritime spatial plan looking ahead to 2020. A revision process was initiated in 2017 to develop a new version of the plan (including a public consultation process) in order to plan for the future up to 2026. In order to align the ambitions for the future on a larger scale, a simultaneous process was initiated concerning the development of a long term vision for the North Sea up to 2050. More than 100 stakeholders assisted the development of the long term vision document through the project ‘Future of the Sea / Sea of the Future’, which kicked off on 16 December 2016. Both the maritime spatial plan revision process and the development of the long term vision follow their own trajectory and timeline but they are related in several aspects, as shown in the figure below.

*The table is in Dutch, but the section below highlights the main differences between the Vision and the maritime spatial plan

The vision is a policy document focusing on the development of the Belgian part of the North Sea, while the maritime spatial plan is a concrete, spatially oriented planning document. While the plan considers the timeline 2020-2026, the vision looks up to the year 2050. Lastly, the plan is legally binding planning document by Royal Decree, whereas the vision has been developed by the State Secretary for the Fight against Social Fraud, Privacy and North Sea, with competence over the North Sea, and is thus a guiding policy document that sets goals and conditions for the long term. The plan can thus be seen as a step-wise instrument to realise the integrated vision on a short term.

Each year, the Think Tank will launch a call for themes, and will organise workshops and other events around selected topics. 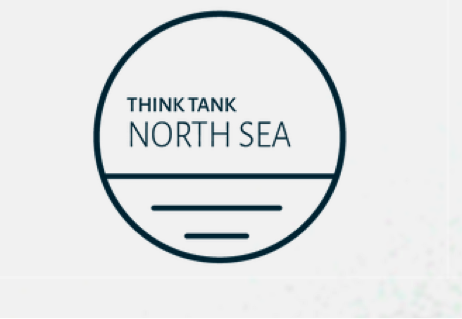 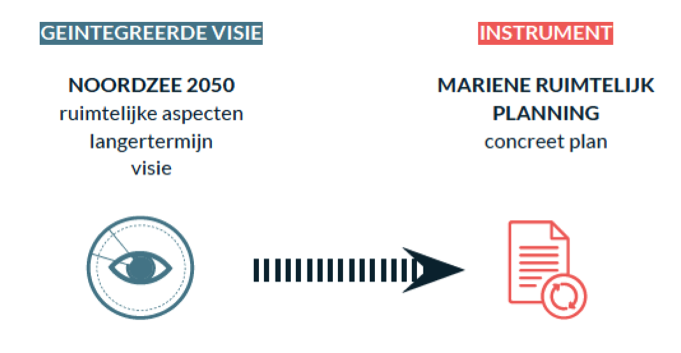 The Vision document describes the development process and sets guiding principles for the future of the Belgian part of the North Sea. Per core principle, the document sets out how this can be supported now and in the future (defining threshold values, mitigation), focusing on aspects such as innovation and ecosystem services.

In cooperation with the Flemish Institute for the Sea (VLIZ) and the Royal Belgian Institute for Natural Science (Operational Direction Natural Environment), a bottom-up trajectory was initiated including the instalment of three core working groups, around the following themes:

Alongside these working groups, six transversal themes were appointed:

*see image below for a graphic representation of the transversal themes 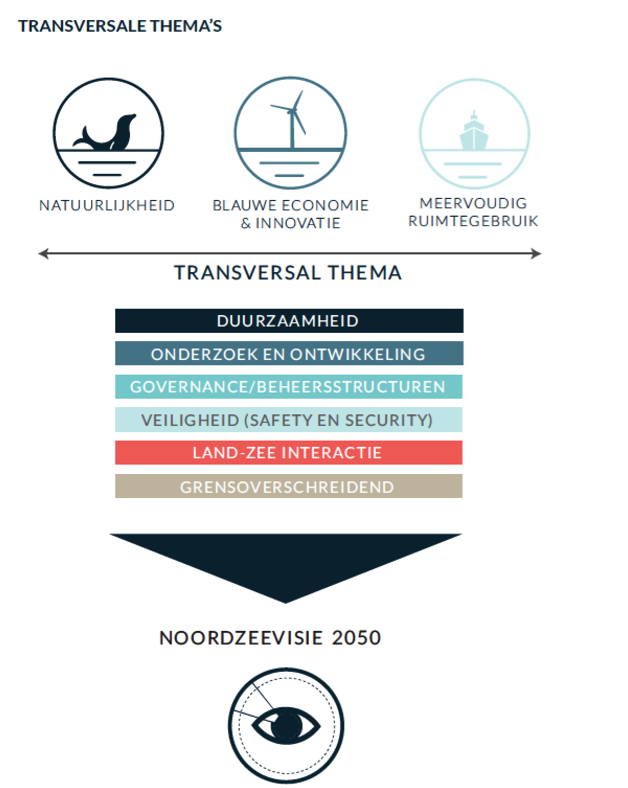 Each working group organised at least four meetings, producing a total of three consensus-based final reports. The final vision is based on these reports as it aims to guide future developments in the Belgian part of the North Sea. The document also includes key tasks to ensure that the policy is transparent, adaptive and participative:

The three groups involved different groups of stakeholders (so called ‘user committees’). A wide range of stakeholders was invited, including authorities, the research community and business representatives. The process was open, so that everyone could participate. However, each stakeholder was only allowed to become a member of one of the three working groups.

Every group made a starting note / briefing paper, and distributed it to the members of the working group. The purpose of the note was to explain the vision process and its objectives, outline the planned number of meetings, and planned outputs. Throughout the process the progress reports were sent to the group members. Each group had a slightly different approach to the organization of the meetings and the methods that were used to facilitate the meetings. Generally, PowerPoint presentations were used to introduce the meetings. The Blue Growth group, for example, invited sector experts to give presentations. Other methods used included participatory mapping, world cafés and exercises using post-its. The meetings were well documented so that those that missed a meeting, could stay up to date.

The main output is the Long term Vision Document for the Belgian Part of the North Sea 2050, which is available in Dutch and in French. In addition, reports are available from the three core working groups (available in Dutch). 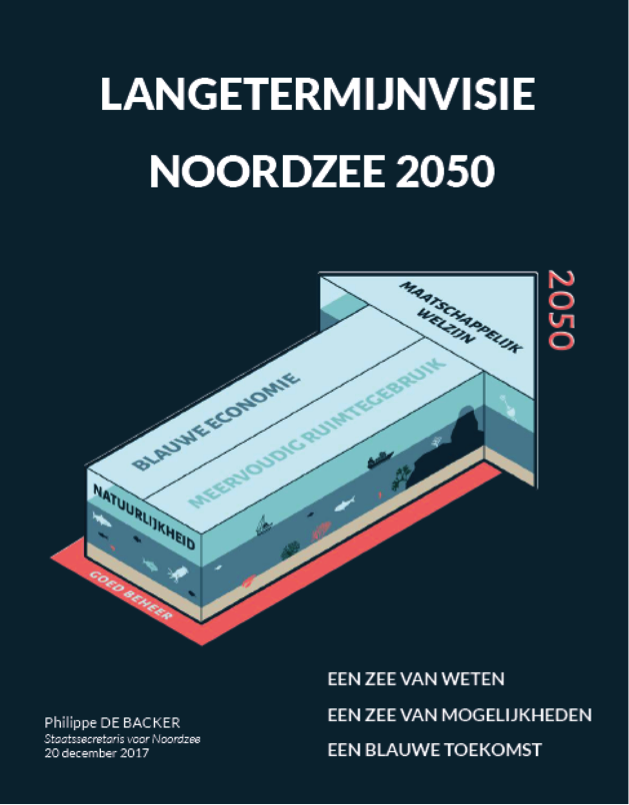 The document may provide inspiration for other countries in all European sea basins for the development of their own national sea basin focus vision documents. The document is available in the Dutch and the French language.

State Secretary for the North Sea. Direct costs of this practice elaboration are unknown.