Marxan software and its advanced version Marxan with Zones, developed by the University of Queensland, were implemented and applied to the Adriatic-Ionian Region (AIR) and to the subarea of the Italian Emilia Romagna Region (RER). The analysis covered different planning scenarios for the prioritization of biodiversity conservation in the AIR, combined with sustainable development of aquaculture in the RER subarea. Achieved results can support spatial planning process in the AIR and the RER subarea, providing scientifically-based scenarios for stakeholders discussion and decision making.

Marxan is one of the most widely used decision support software (DSS) for conservation planning. Within the Ritmare project and with the support of other projects (Adriplan, Supreme, Erasmus Mundus Master Course on MSP), Marxan and its advanced version Marxan with Zones were applied to the Adriatic-Ionian Region for biodiversity conservation and to the subarea of the Italian Emilia Romagna Region with a specific focus on achieving the goals of sustainable development of aquaculture activities and biodiversity conservation.

The main objectives of the application of the Marxan tool in the AIR and in the RER subarea are:

Following the identification of the two study areas (the AIR and the nested RER subarea), the definition of their relative main characteristics (on the basis of the results of the DG-MARE funded ADRIPLAN), current needs and priorities and the identification of specific aims of the analyses, two different methodologies were applied for the implementation of spatial prioritization through MARXAN, respectively for the AIR and the RER scale.

The methodology for the AIR analysis consists on the following consecutive steps:

The methodology for the RER analysis was carried out through the following consecutive steps:

The main outputs coming out from the implementation of spatial prioritization through the Marxan tool to the AIR are:

The main outputs of the analysis of the RER subarea are: (i) biodiversity prioritization considering and ignoring costs, and (ii) an integrated zoning plan (see figure below) which meets the targets for multiple objectives, in order to simultaneously ensure biodiversity conservation and maximize the profitable expansion of sustainable aquaculture, while minimizing impact on the other activities in the Emilia Romagna Region. As shown in the figure below, three main zones have been identified to achieve the aim of the analysis:

Moreover, cells in grey in the figure visualize planning units considered “flexible” as do not show preference in the selection frequency for any particular zone.

In general both the analysis at AIR and RER scale can support multiple stakeholders discussion and decision-makers towards cost-efficient solutions that are scientifically based, thus contributing to the marine spatial planning process and sustainable growth in the RER and in the wider AIR. 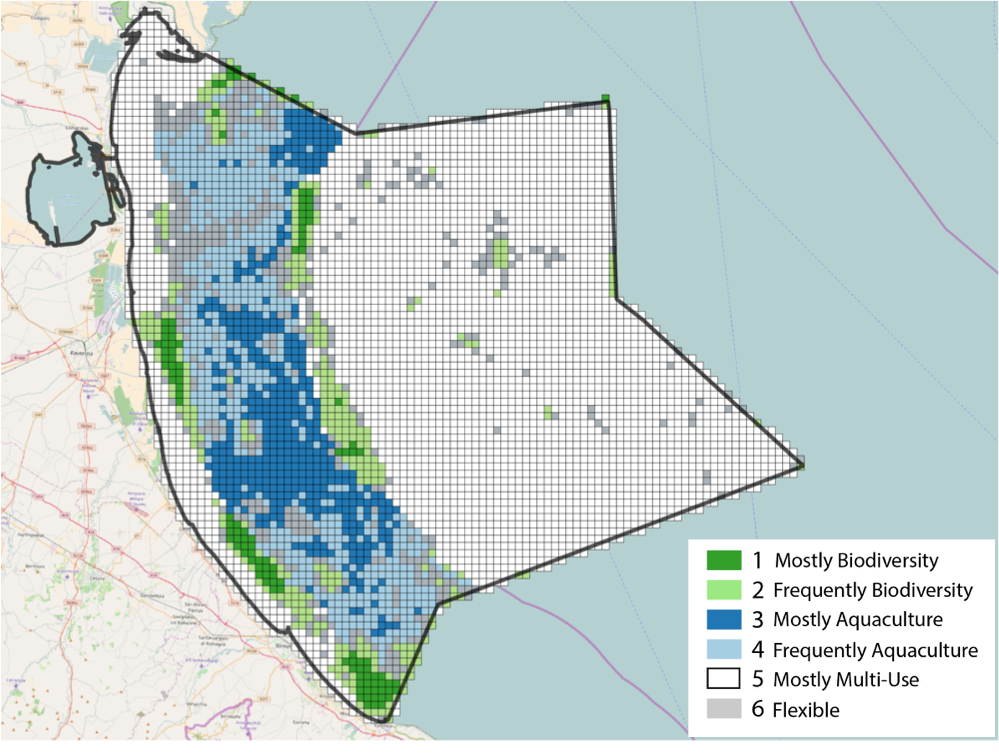 The Marxan software and its advanced version Marxan with Zones are freely downloadable at the website www.marxan.net. Its application to the Emilia Romagna Region and the wider AIR can be used as an inspiring practice for similar implementation in other marine area. The Adriplan Data Portal, collecting and displaying spatial data for the whole Adriatic Ionian Region in particular supports its transferability to other subareas of this region.

The use of Marxan and Marxan with Zones requires skilled expertise and resources. Moreover, it relies on wide data input; if not supported by dedicated projects (as Adriplan in this case) data collection and structuring can be time and resource consuming activities. Marxan scenarios depend on set assumptions (as in the case of any DSS); results of the software application should be considered as starting points for stakeholder discussion and decision making, rather than scientifically-based decisions.

Costs: not possible to be defined, as part of the overall funds to the RITMARE, SUPREME, ADRIPLAN, EMMCMSP projects.