Analysis of multiple stressors in Brindisi area through DPSIR approach

Shape pilot project implemented in Puglia Region focused on assessment of the environmental features and problems affecting the marine and coastal zone of the Marine Protected Area (MPA) of Torre Guaceto and the neighbouring port and industrial area of Brindisi. In the first phase updated data and information were collected, focusing on a range of topics, as: geomorphology, climate, oceanography, biological communities, terrestrial habitats, flora and fauna species, environmental protection, land and sea uses, planning and regulation system. Much of this information was processed and mapped with GIS. In the second phase 70 indicators were selected and calculated, referring to the DPSIR (Drivers, Pressures, State, Impact, Responses) approach, and cumulative indexes were derived. In order to better discriminate the status of the marine and coastal zone subjected to different pressures, the study area was divided in three sub-areas: (a) the MPA of Torre Guaceto; (b) the area included between the previously mentioned MPA and the urban and industrial area of Brindisi; (c) the urban and industrial area of Brindisi.

Analysis of multiple stressors in Brindisi area through DPSIR approach 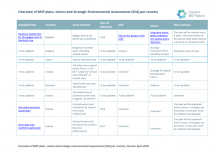 The pilot project was developed within the project SHAPE “Shaping an Holistic Approach to Protect the Adriatic Environment between coast and sea” (http://www.shape-ipaproject.eu/), co-funded by the IPA Adriatic CBC Programme 2007-2013. SHAPE aimed at developing a multilevel and cross-sector governance system for MSP and ICZM in the Adriatic Sea, based on a holistic approach and integrated management of the natural resources, risk prevention and resolution of conflicts among uses and users of the Adriatic coast and sea. Shape started in May 2011 and was concluded at the beginning of 2014. The project in total involved 13 partners representing all Italian coastal regions and eastern Adriatic countries; PAR/RAC of UNEP/MAP also participated to the project.

Shape developed nine pilot projects approaching MSP issues at the local or regional scale. Some projects directly dealt with the holistic and integrated nature of MSP while other focused on specific issues, as: data gathering and monitoring supporting MSP, bridging the gap between science and decision making, analysis of socio-economic aspects, links between MSP and MSFD or ICZM. 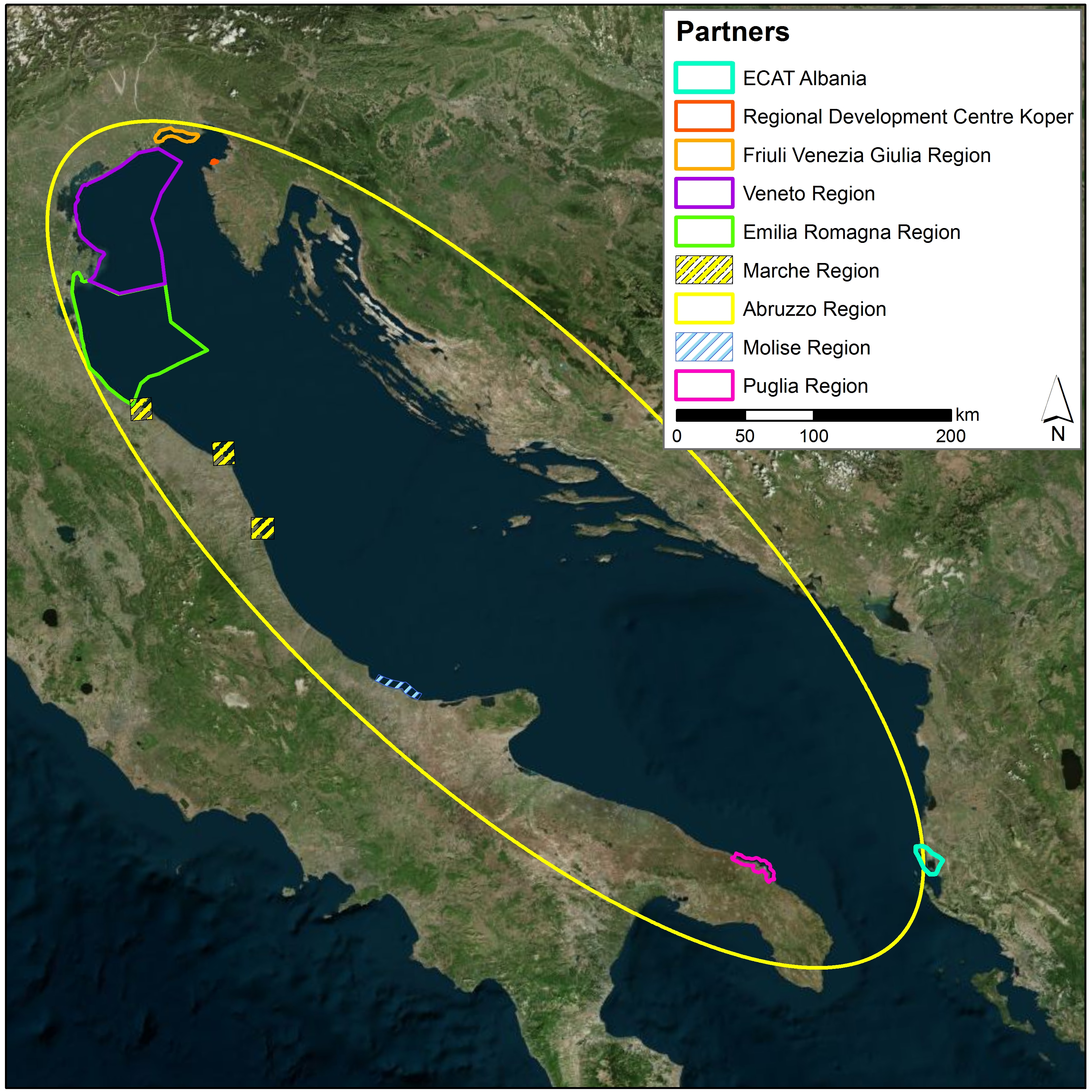 The Puglia Region pilot project provides an assessment of the environmental features and problems affecting the marine and coastal zone (defined as the zone included between 1 mile offshore and 3 km inland with respect to the coastline) of the Marine Protected Area (MPA) of Torre Guaceto and the neighbouring port and industrial area of the town of Brindisi, through the application of a DPSIR (Driving, Pressure, State, Impact, Response) approach. The project aimed at analysing and elaborating land and marine data in order to generate information really useful for planning and sustainable management of the coastal and marine zone of Brindisi area, as well as to disseminate such information and the applied methodologies.

The pilot project was developed according to two main phases.

In the first phase updated data and information were collected. This referred to a wide range of topics, including: geo-morphological characteristics of the area, coastal and marine climate features, oceanographic features, marine-coastal biological communities, terrestrial habitats, flora and fauna species, environmental protection system, land and sea uses and restriction and regulation system (landscape, urban, hydrological, etc.). Most of the collected information was spatialized and mapped with GIS.

In the second phase 70 indicators were selected and grouped in the five categories of the DPSIR approach: Drivers, Pressures, State, Impact and Responses. Indicators were then calculated and if possible mapped.

In order to better discriminate the environmental status of the marine and coastal zone subjected to different pressures, the study area was divided in three sub-areas: (A) the Marine Protected Area (MPA) of Torre Guaceto; (B) the southernmost area between the previous mentioned MPA and the urban and industrial area of Brindisi; (C) the urban and industrial area of Brindisi. Each sub-area was further divided into five sectors, three located on the land side and two located on the sea side; this subdivision led to the identification of 15 homogeneous sectors in total. For each sector, average value of normalized indicators were calculated. Finally, 3 cumulative indexes were calculated and mapped: Driver-Pressure cumulative index, State-Impact cumulative index and Response cumulative index. 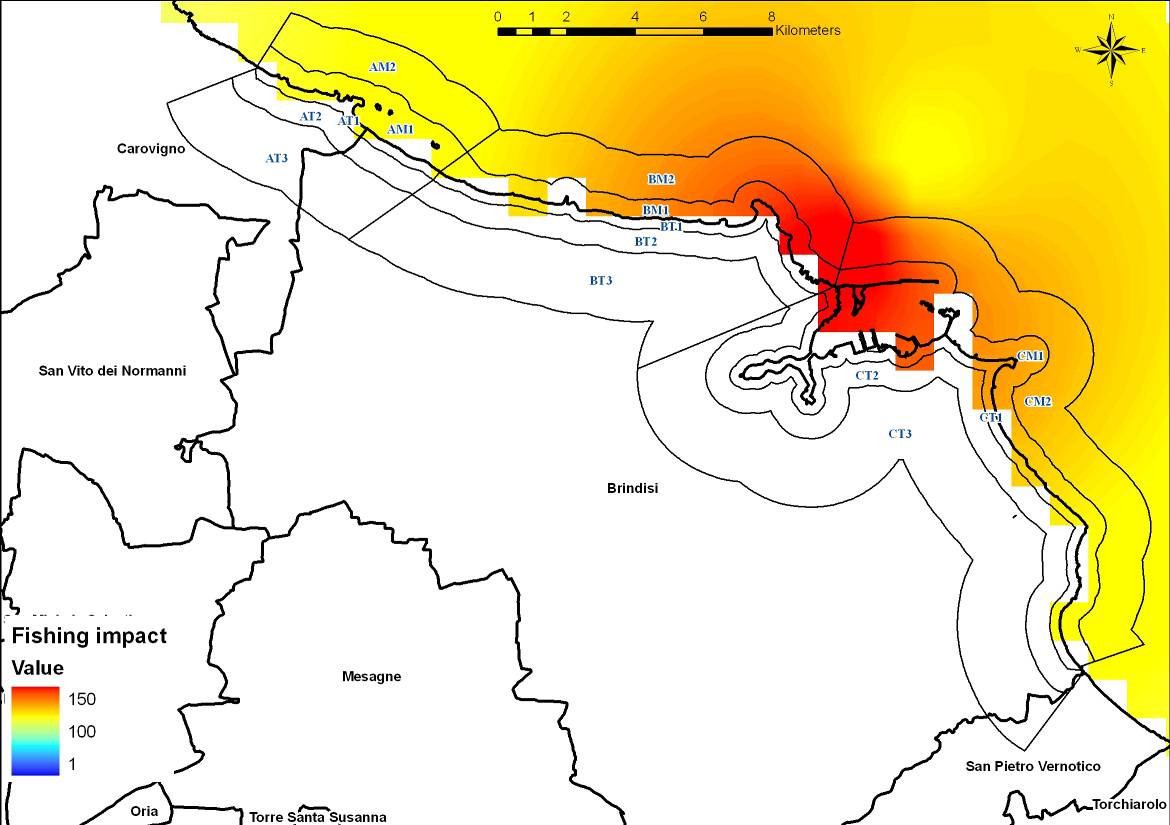 The complete description and representation of all 70 DPSIR selected indicators is included in the document “Action 4.4 MSP Pilot Project – Puglia Region Final Report” (issued in October 2013) available in the Shape projects’ web-site. Analysis of cumulative indexes highlighted the following results.

Among the three considered sub-areas, the one including the industrial site and the town of Brindisi (C) shows higher levels of Drivers and Pressures, the worst Status (with the higher level of Impacts) but also a significant level of Responses. The comparison between Driver-Pressure and State-Impact indexes shows a straightforward linear and inverse relationship. Not the same linear relationship was found between Driver-Pressure and Responses, and this appears to be a weak point of the overall system of policy and environmental management in the investigated area. The results highlight that Responses measures are manly taken into account in two cases: when an area is under a restriction regime (i.e. marine or coastal protected area, as it occurs in the sub-area A) or when the environmental situation has reached a critical point, as in the case of the industrial area of Brindisi (subarea C). The in-between area (mostly occupied by sub-area B) is the one that has the higher risk to fail in terms of sustainable management. 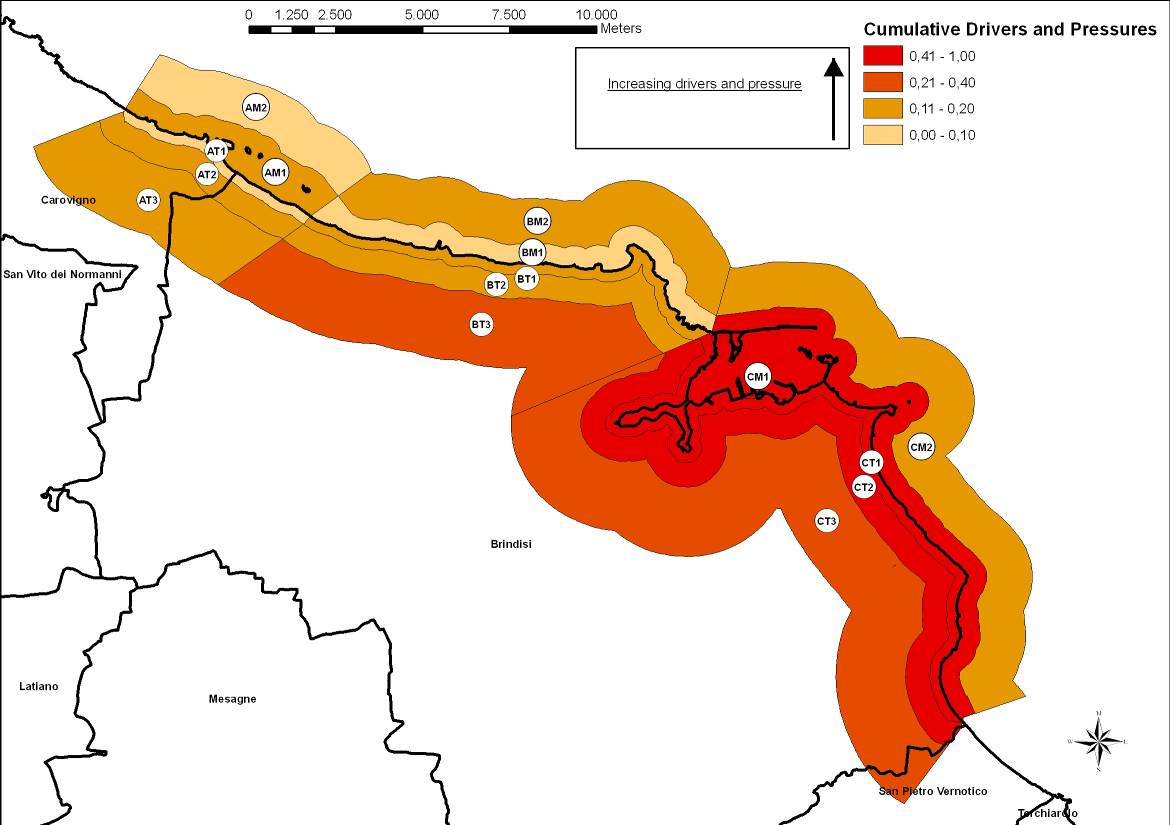 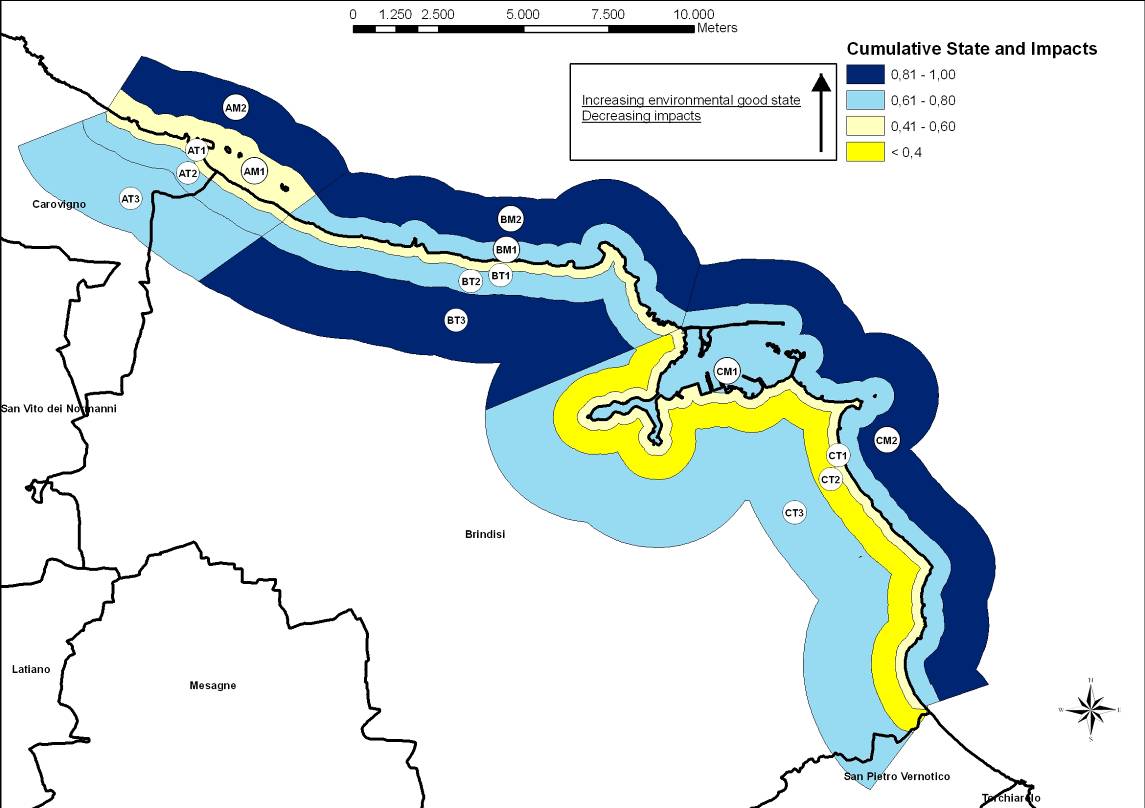 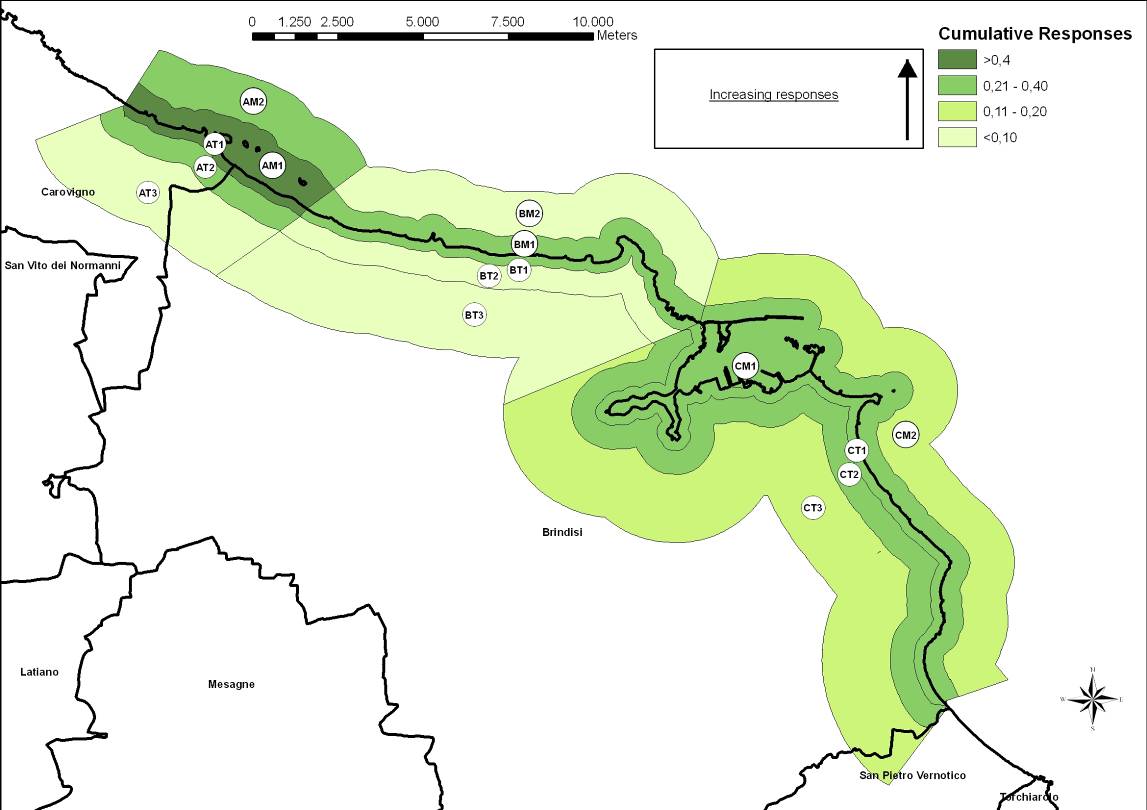 The Shape pilot project tested in Brindisi area located in Puglia region a spatial application of the DPSIR approach, including selection and calculation of indicators and cumulative indexed. This methodology can be replicated in other context.

Spatial representation of indicators and cumulative impacts can be an useful tool to inform and support the planning process, in particular to identify most critical sub-areas where more detailed analysis are needed.

Funding Source: the pilot project was developed within the SHAPE project, co-funded by the EU through the IPA Adriatic CBC Programme 2007-2013.

Costs: the pilot project is one of the activity of the SHAPE project. Its specific cost cannot be defined as it is part of the overall funds to this project.