Scenarios of maritime economy for the Mediterranean

The practice within the MEDTRENDS project illustrates and maps the main scenarios of maritime economic activities for the EU Mediterranean countries in the next 20 years. It shows an in-depth analysis of the current situation and future trends in 10 of the main maritime economic sectors, their drivers and environmental impacts. The analysis is done in particular in the context of the 10% marine protected areas target set for the Mediterranean and the GES objectives of MSFD. Results are available through a dedicated web-portal for 4 of the most important sectors: offshore oil and gas exploration and extraction, maritime transportation and port, professional fisheries and tourism. Results for other sectors (recreational fisheries, marine aquaculture, marine renewable energy, marine mining, coastal development, land-based pollutions sources) are included in MEDTRENDS reports. The analysis was implemented at the Mediterranean regional or sub-regional (Adriatic Sea) scales and more specifically at the level of the 8 EU Mediterranean countries (Croatia, Cyprus, France, Greece, Italy, Malta, Slovenia and Spain.

The scenarios of maritime economy and their impact on ecosystem in the Mediterranean were developed in the framework of MEDTRENDS project. The collection and analysis of geo-localised socio-economic and environmental information on 10 key maritime sectors was combined with a wider spatial analysis that helps identifying interactions and conflicts between sector development and the protection of marine ecosystems. The analysis investigates these interactions at the Mediterranean regional or sub-regional scales and more specifically at the level of the 8 EU Mediterranean countries (Croatia, Cyprus, France, Greece, Italy, Malta, Slovenia and Spain). Today’s situation and future developments up to 2030 were considered.

The main objectives of the scenario analysis and formulation were:

Future trends of key maritime sectors resulting from MEDTRENDS analysis are summarised in the following table. 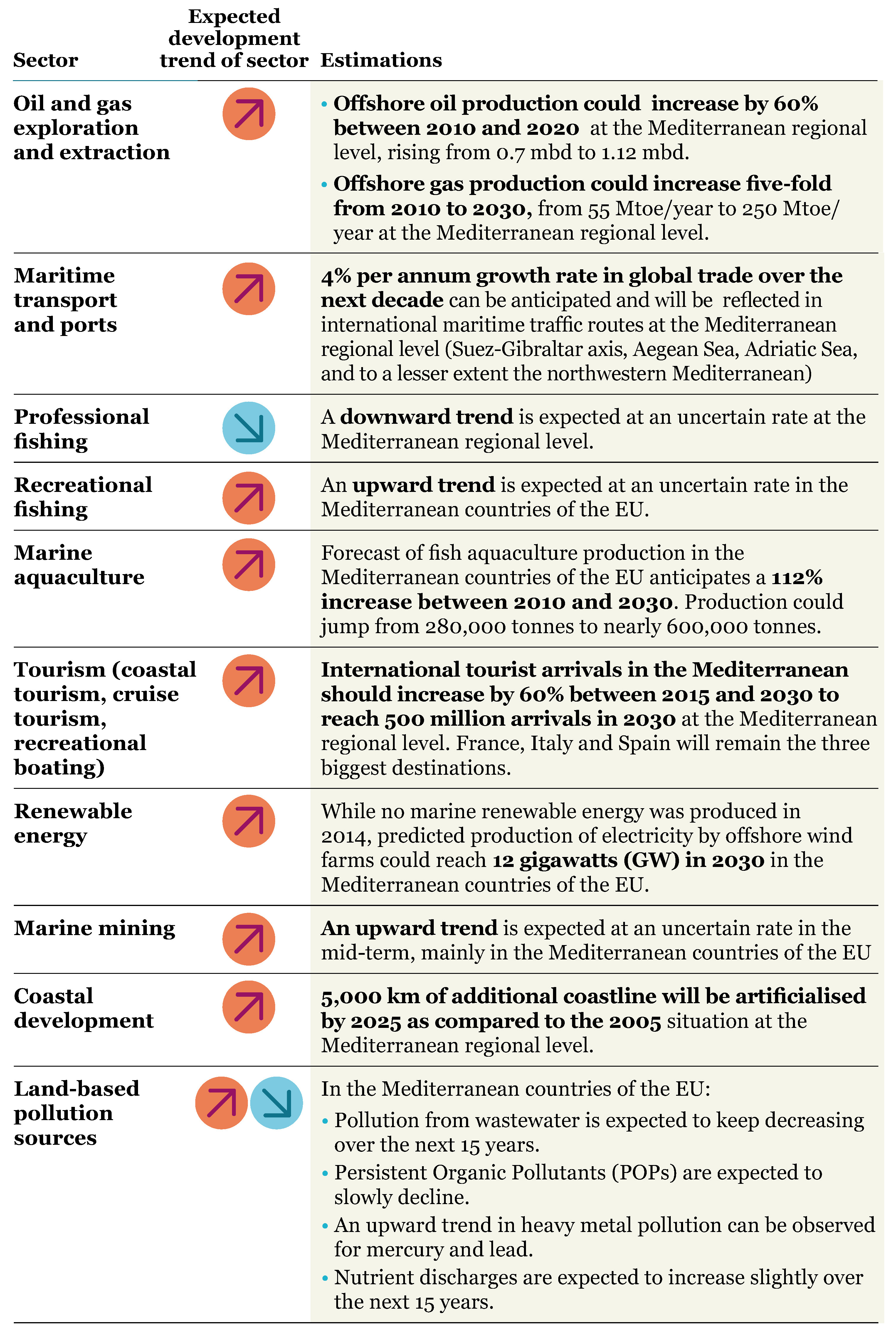 Interactions between sectors vary greatly. For some sectors, interaction might be positive, e.g. the development of offshore wind farms areas providing potential for new aquaculture production sites. On the other hand, the growing development of maritime sectors can lead to potential conflicts, in particular:

MPAs in the Mediterranean Sea region accounted for 1.08% of its area in 2010 (Pelagos Sanctuary excluded). This area increased to 3.21% according to a 2015 assessment[1], most of the new designated MPAs being located in EU waters. To achieve the target, the EEA estimates that the EU Member States should designate over the next 5 years the same area of MPAs as they have already designated under the marine Natura 2000 network over the last 20 years[2]. It is thus unlikely that the 10% target will be achieved in 2020 at the Mediterranean regional scale. While the EU will boast the highest level of achievement, very different levels of progress will be occurring between the 8 EU Mediterranean.

The adopted methodology is well described in its steps in the main source report (Piante C., Ody D., 2015. Blue Growth in the Mediterranean Sea: the Challenge of Good Environmental Status. MEDTRENDS Project. WWF-France. 192 pp.) and in principle could be applied to other regional or sub-regional seas. MEDTRENDS scenarios, results of the interaction analysis (among economic sectors and between these and MPAs) and recommendations can underpin further studies, projects and initiatives at the Mediterranean and sub-basin level, including those on Blue Growth and MSP.

Director of Communications and Corporate Relations

Funding Source: the trends and scenario analysis was developed within the MEDTRENDS project, funded by MED program (ERDF funds) and by the French Ministry of Environment, Energy and Sea.